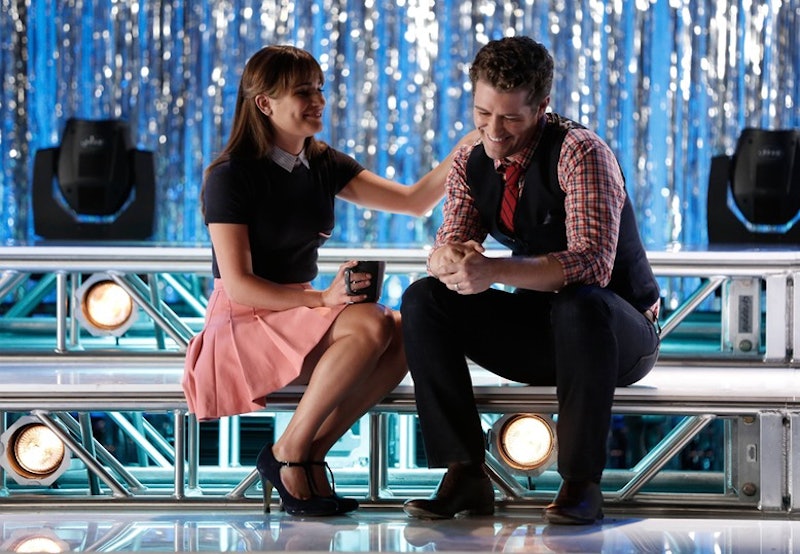 We are so close to the final season of Glee that we are slowly gaining more details about what we can expect from the Season 6. We have some idea of where the members of New Directions will be when the show returns in January. We know that Rachel is back in Lima, as is a lot of the original cast. We also know that Rachel and Blaine will be getting a lot of attention, which could be why FOX has recently released the first full performance of Season 6, "Sing," sung by Glee 's Warblers featuring Blanchel themselves.

Almost exactly the same way we met Blaine (remember back in the day, the "Teenage Dream" days?), Rachel and Blaine are seen watching a killer performance by the Warblers as they sing "Sing," by Ed Sheeran — Blaine even jumps in at the end of the song. Blaine is returning to his home turf in this upcoming season as the Warblers' coach, and it seems he's used some of his New York time to teach these boys how to really move. If this performance is any indication of where the season is going, I think it is safe to say that we are in for some really great numbers to cushion the blow of this being the final season.

Watch the video below, and tune into Glee on FOX, Jan. 9.

More like this
Did 'Grey’s Anatomy' Just Drop A Major Taylor Swift Easter Egg?
By Grace Wehniainen
Everything To Know About Taylor Swift’s 10th Studio Album, 'Midnights'
By Grace Wehniainen and Jake Viswanath
Everything You Need To Know About ‘Black Panther: Wakanda Forever’
By Bustle Editors
Christian Bale Sang With Taylor Swift & His Daughter Can't Believe It
By Radhika Menon
Get Even More From Bustle — Sign Up For The Newsletter