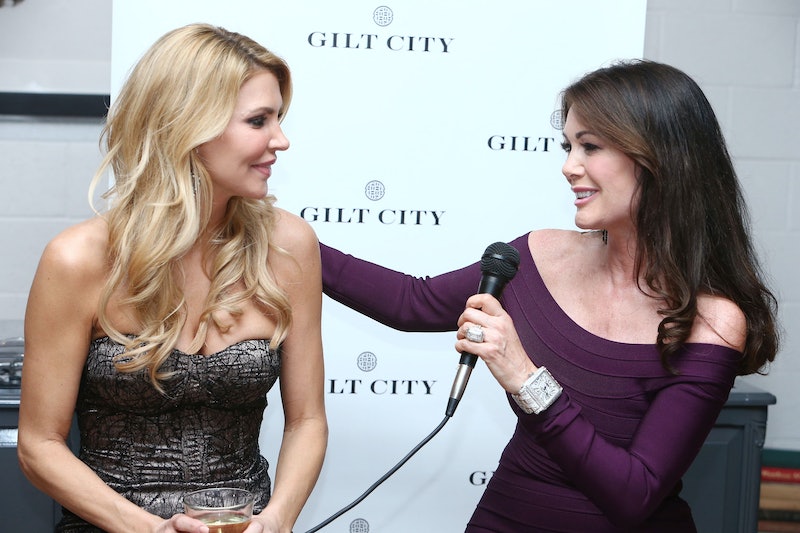 There were not one but two parties on the Dec. 30 episode of The Real Housewives of Beverly Hills , and just because these ladies managed to not kill each other during the first soiree doesn't mean the second one would have the same results. After Lisa Vanderpump surprised Brandi Glanville by attending her housewarming party, it seemed like the two were on the path to mending their friendship. But I think Brandi's shenanigans at Lisa's charity event set their relationship back. Way back.

First up, with the best of intentions that had nothing to do with wanting to steal the spotlight from Lisa, I'm sure, Brandi extended an olive branch to her former friend. Literally. Well, first it was more of an olive twig, to which Lisa said Brandi had to basically chop down the whole tree if she wanted to make peace. Then, Brandi plucked an actual branch out of a beautiful, living tree in the courtyard of Lisa's restaurant Pump. You could almost hear the tree crying when it happened, I swear.

Then things got weird. Yes, believe it or not, that was not the weirdest or most damaging moment for Brandi and Lisa's relationship. When Lisa told Brandi to not take any more branches out of her tree, Brandi replied, "Would you like me to eat your pussy?" Yeah, that happened.

I get it. Brandi was just trying to prove her point that Lisa is an awfully tough nut to crack who doesn't seem to want to make any effort to move their friendship forward no matter what Brandi does. But that was shocking to hear out of Brandi's mouth, and that's saying a lot. Good for you, Brandi, for still keeping things interesting. Well done!

Wow, RHOBH is really building up this feud between Lisa and Brandi, isn't it? Episode after episode, it's like we get so close to actually seeing the big confrontation but then it doesn't actually materialize. That's just not interesting.

In fact, this whole season has really just been tragically drama free. It's just been hinting at old arguments and building up to confrontation, but nothing ever actually happens. Hopefully, Brandi and Lisa's fateful lunch in next week's episode will change that.