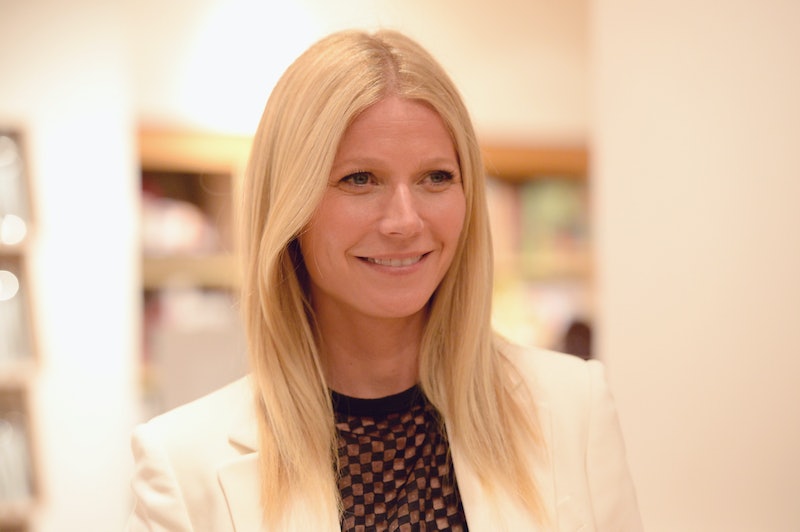 Gwyneth Paltrow is a woman of extremes to me. It's either she makes perfect sense (these times are admittedly rare for me) or she makes no sense at all. This is, after all, the same star who said she believes that water has feelings. However, Paltrow has a lot of experience in the area she is discussing so frankly in her Harper's Bazaar cover interview. In the February issue of the magazine will be an interview with the celebrity in which Paltrow discusses women tearing each other down — and how it needs to stop. Her thoughts about women and their current roles in society are incredibly feminist, so it was a little disappointing to me that she never actually uses the word at any point. But I'm getting ahead of myself.

"Women really need to examine why they’re so vitriolic to other women; why they want to twist words, why they want to read about someone else in a negative light and why that feels good to them..." says Paltrow, after mediating about how her experience with her lifestyle website Goop has given her a beloved collective of women to commiserate with and feel supported by. "But I also know a huge tribe of women who are loving and supportive of other women, in ways that are completely transformative."

Paltrow didn't specifically reference her ongoing feud with Martha Stewart, but you can't help but feel she's speaking from personal experience here. And the fact of the matter is that she's right. It's so often that women are influenced or pressured by society to feel as if they're in competition with one another, to look for flaws in one another to make themselves feel better, to find satisfaction in each other's failures rather than each other's successes. Quite frankly, women are taught to view other women as threats and sitting back to examine that feeling of jealousy and envy would reveal it as a societal issue rather than anything ingrained.

That's when Paltrow's speech turned to feminism. "I think we are a generation of women who are different in a lot of respects, and some of us want to be ambitious, and for it not to be a dirty word. We want to be feminine and soft, we want to be maternal, we want to be sexual, we want to be explorers — and we can be a combination of all of these archetypes. You can be powerful, but you can also be vulnerable." Sorry if I'm reading too much into this, but is Paltrow advocating and defending a woman's right to choose to define herself by whatever standards she chooses and thus become anything she chooses? Preach. The right and freedom to choose is one of the tenets of what feminism is all about.

That's why it's a little disappointing to me that Paltrow never actually uses the word feminism or identifies as a feminist at any point during the Harper's Bazaar interview. The last time I can even recall Paltrow using the word feminist was, ironically, in another Harper's Bazaar interview from 2012, in which she gave a friend some incredibly inaccurate advice: "I said this may not be feminist, but you have to compromise. It's been all about you and you're a big deal. And if you want what you're saying you want — a family — you have to be a wife, and that is part of the equation." I'm still trying to forget she ever said that (pfft, as if you can't be a feminist and want a family or to be a wife).

This Harper's Bazaar interview was her chance to come full circle and show that her views on feminism have grown and changed with some education. 2014 marked a certain awareness in the realm of feminism that had many celebrities reclaiming the word, clearing up misconceptions about its definition, and encouraging more people, male and female, to advance feminist causes. Paltrow's frank discussion of the competitiveness between women and their right to choose shows that she has an understanding of what it means to be a feminist that is, perhaps, not directly associated with the word itself. And that strikes me as sad, because it means she still has a ways to go in order to understand why she, and everyone else of every gender and sex, should identify as feminists.

More like this
UK Viewers Will Have To Wait To Watch The Handmaid’s Tale S5
By Maxine Harrison
Megan Rapinoe's Relaxation Hack Is Super Dreamy
By Carolyn Steber
Everything To Know About Taylor Swift’s 10th Studio Album, 'Midnights'
By Grace Wehniainen and Jake Viswanath
What Is Miles Teller’s Net Worth? The 'SNL' Host's Bank Account Is No Joke
By Meg Walters
Get Even More From Bustle — Sign Up For The Newsletter