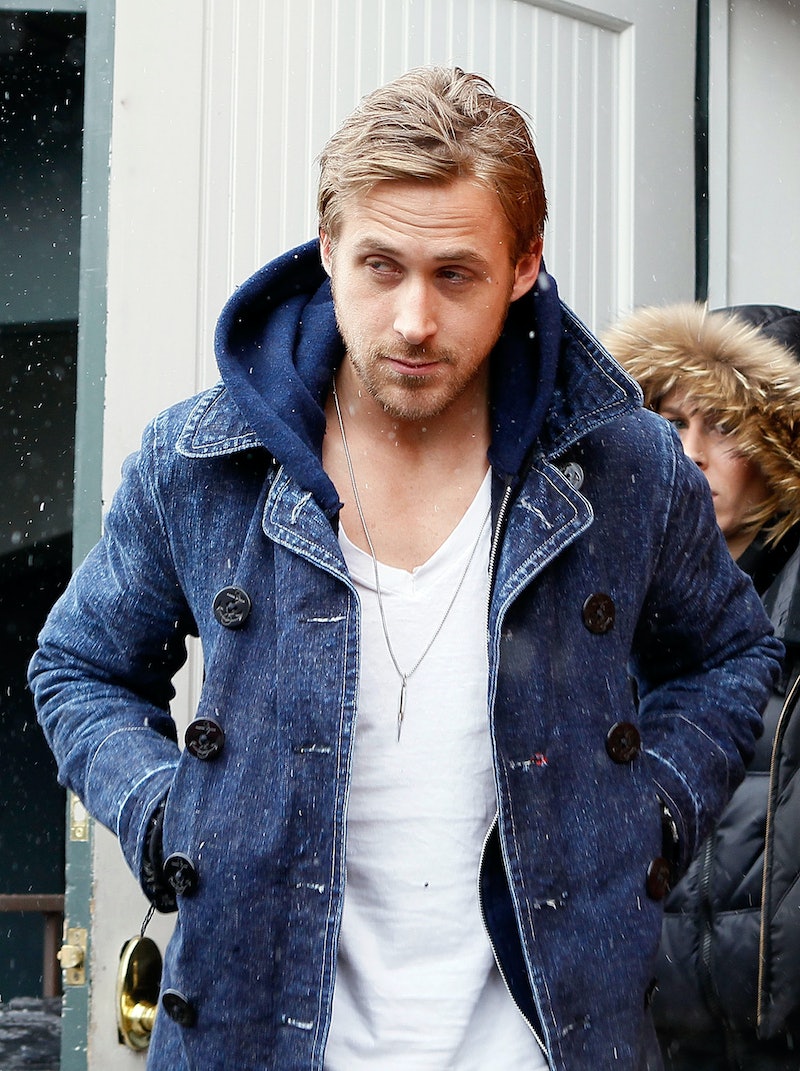 Poor Ryan Gosling. He might be lucky enough to be dating Eva Mendes, and lucky enough to be the world's greatest feminist dad (meme), but his film career has hit a snag. Not acting-wise, of course, because he's still fantastically talented and has several projects coming up, but his debut as a director was apparently so bad that Lost River is only being released straight to video on demand. Mind you, the film was apparently so bad that it got booed at the Cannes Film Festival, but only being released on VOD? That's harsh. Thankfully, there's a light at the end of this dark tunnel — even if it's a really small light that will probably blink out before you even reach it. Gosling's Lost River is getting a limited theatrical release for those who like to watch their movies on the big screen, but the keyword there is limited.

According to the LA Times, Warner Bros. has decided to allow select theaters to play Lost River after all. However, the movie will only get an "exclusive theatrical run in Los Angeles and New York." So, if you live in one of those middle states or, you know, in any city but L.A. and NYC, then you're going to have to brace yourself for a long car ride with frequent bathroom breaks if you want to see a larger-than-life-size Gosling movie.

But that's not even the worst part. Not only is Lost River only getting a limited theatrical release in two cities, but it doesn't even have a release date. While the release date of the VOD version of the movie is slated for some time in April, "Warner Bros. says it has yet to date the film." I mean, presumably it will hit theaters at the same time that it hits VOD, but, I mean, what would be the point of that? Who is going to take a road trip to Los Angeles or Manhattan to watch something they could just download at home? What game are you playing here, Warner Bros.?

Apparently, however, Gosling is on board with their unusual marketing strategy. According to Warner Bros. president of domestic distribution, Dan Fellman, "I think it's a specialized film. It's really something that needed special handling — which the filmmakers were well aware of... I think Ryan did a really good job with the film." Personally, I'm already eager to see the film just based on how bad it has to be to be booed at Cannes, critically panned, and then prevented from getting a national release even with a name like Gosling's attached (not to mention Eva Mendes, Christina Hendricks, and Matt Smith who actually star in the movie.) However, it really doesn't feel like the movie is worth going to watch in the theaters versus seeing it at home thanks to video on demand.

Still, all of these complications could turn Lost River into a sleeper hit for Gosling. The two films might be on two completely different levels, in two completely different genres, and represent two completely different things to the American people, but look how well The Interview did despite being pulled from theaters and only released digitally. The fact that people aren't able to buy a ticket to see Lost River might be all the incentive they need to make sure they order it on demand — because as Americans we do not appreciate being told we can't do something. However, considering this movie isn't about free speech — and has a 25% rating on Rotten Tomatoes, ouch — this marketing strategy might not work out after all. We'll just have to wait and see.

More like this
Everything You Need To Know About ‘Black Panther: Wakanda Forever’
By Bustle Editors
Twitter Has So Many Thoughts About ‘Don’t Worry Darling’ After Its Release
By Stephanie Topacio Long
Everything To Know About The Long-Awaited ‘Community’ Movie
By Stephanie Topacio Long
'Peaky Blinders' Creator Shares Exciting Update On The Upcoming Film
By Sam Ramsden
Get Even More From Bustle — Sign Up For The Newsletter