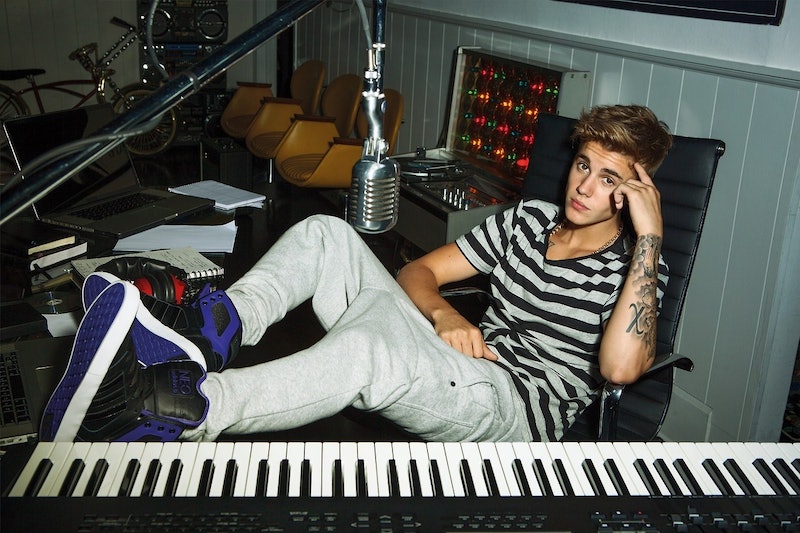 Justin Bieber has had a rough year. An arrest. Drag racing. Attitude-driven depositions. Pot in his system. Poorly received underwear modeling at Fashion Rocks. Endless off and on with Selena Gomez. It's hardly been about The Biebs' music in 2014. But through it all, the singer has actually upped his style game. Justin Bieber has been the face of Adidas NEO, the brand's youth-directed line, for the past two years — with Gomez on the female side — and his look has improved and become defined. Those swoopy bangs are long gone in favor of neck and chest tattoos, leather pants, gold chains, and an endless supply of kicks. He's actually cultivated a stylin' urban look. Hey, you have to respect a dude with enough balls to wear a sweater dress out in public.

Both Bieber and the brand celebrated the completion of the contract for their two-year partnership with a "That's a wrap"-style tweet and video, but Biebs hinted that perhaps this is not the end. And you know what? It shouldn't be O-V-E-R, and not just because he could use a stable relationship.

Biebs tweeted a thank you and noted that there is "more to come." The brand shared a video commemorating his two years as brand ambassador, and it featured exploding sneakers and lots of shaking and crying by his beloved Beliebers. The accompaning text was a bit of a gush fest, with the brand fawning over the singer and writing: "Beliebers from the start, NEOliebers till the end. The last two years have seen tears, endless smiles, a few hundred heart attacks and countless cases of 'I can’t breathe!' Join us as flip back into the past and celebrate an epic collaboration. With teary eyes and big smiles, we say, 'WE LOVE YOU JUSTIN, WE WILL ALWAYS BE BELIEBERS!'"

And this is the video loaded with hand wringing and gnashing of teeth.

Both sides suggest that they want to move forward with the partnership but there is no confirmation... yet. These are three reasons that re-upping is a splendid idea. Seriously, hear me out!

1. Bieber Still Has Tons Of Fans

Despite his antics, Bieber still has an iron-fisted grip on the tween demographic and his social media prowess is second-to-none. As he approaches 21, there are dudes out there who might start looking up to him and want to dress like him, since the girls still dig him. It'd be wise for NEO to keep him around.

2. His Style Is Actually Cooler Than He Gets Credit For

The baggy leather jeans, hoodie, cap, and slip ons look terrific on him. It's a well-edited street style. Haters can hate, but let's be honest here: His style is undoubtedly unique.

I know, he's a Canadian and he's fun to hate on, and the idea of a 21-year-old having a comeback is ridiculous on paper. Still, the seat of his fame is in the U.S. and given his less-than-stellar 2014 and the fact that he has been famous since he was a wee lad, Biebs is primed for a resurgence in 2015 — and will be well-dressed on the comeback trail. Adidas NEO can only benefit from that type of publicity and awareness. It's all about the business of fashion if Adidas NEO re-ups.