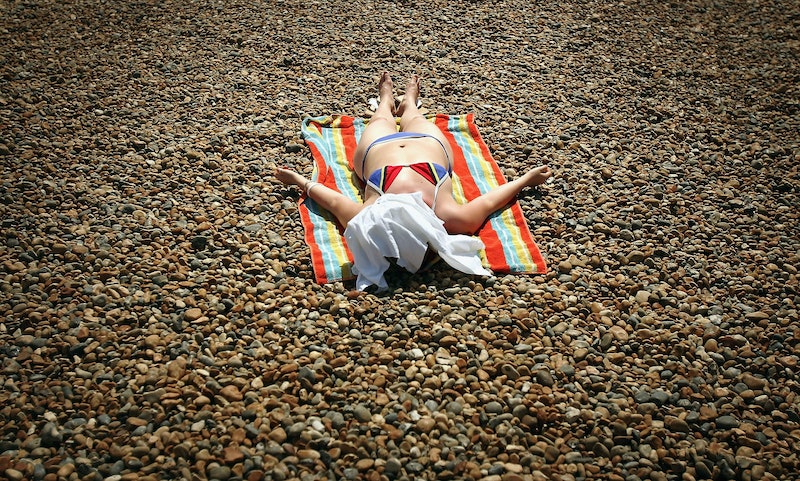 Undercover Boss, for the uninitiated, is about bosses (normally an owner or CEO, someone very high up on the company ladder) who go undercover in the workplace to see how the worker bees behave on the job. It's normally filled with revelations, new understanding, and Oprah style "Everyone gets a vacation!" moments when the undercover boss realized how underpaid and underworked, and yet how valuable, his or her staff is. However, last night's episode, Undercover Boss went in a different direction at a bikini bar, with a boss that showed us chauvinism is alive and well in the work place. Not only did boss man Doug Guller fire one female employee for refusing to wear a bikini on TV, he also gave another female employee fake boobs as a gift. Wow.

The woman who was fired, "Jessica", had the problems with her service enumerated for her, with the first and foremost being that she had elected to wear a t-shirt instead of a bikini top because of the TV crew filming. Apparently, this was a "bummer" for boss Guller (who was, judging by the clip below, undercover as a dude selling molly on the boardwalk). Probably the only good part of this is the slight narrowing of Jessica's eyes as Guller makes the redundant point about her boobs. He also accuses her of over-serving a customer, and because bikinis doesn't seem to be her passion (really? She doesn't want to work in a titty restaurant as her forever career?). Not that there's anything wrong with working in a bikini restaurant, but there's also nothing wrong with a woman with being dissatisfied with her career and wanting more; it's made out here like she should just be grateful with her lot, which is simply wrong. Jessica is rightfully humiliated, and calls the whole thing "stupid", which it is. Watch below:

The woman with whom Guller is so impressed, "Grace", is the "model Bikinis babe." Not the model employee. Not the model worker. The model "babe". Even though Guller loves Grace, there's a big BUT, and that is the "issue" with her "boobies" (to be fair, she called them "boobies". He said they were an "issue"). At which point Grace is gifted with a free boob job, because obviously men get to police what's attractive on a woman, because it's a man's world, and why do you think it's okay to have such small titties anyway, feeble woman? Good for Grace that she's doing well at her job, but come on with the boob job; couldn't she have been gifted something non-objectifying, like a Hawaiian vacation or a new car? Watch the weird clip below, and vomit over the way Guller links self-worth and paychecks directly to boob size:

More like this
Where Is Former Bachelor Host Chris Harrison Now & What Is His Net Worth?
By Hugh McIntyre
Black Women's Equal Pay Day Highlights An Upsetting Problem
By Brandi Neal
Everything To Know About 'RHONJ' Season 13
By Brad Witter and Jake Viswanath
Everything To Know About 'RHOA' Season 15
By Gretchen Smail
Get Even More From Bustle — Sign Up For The Newsletter