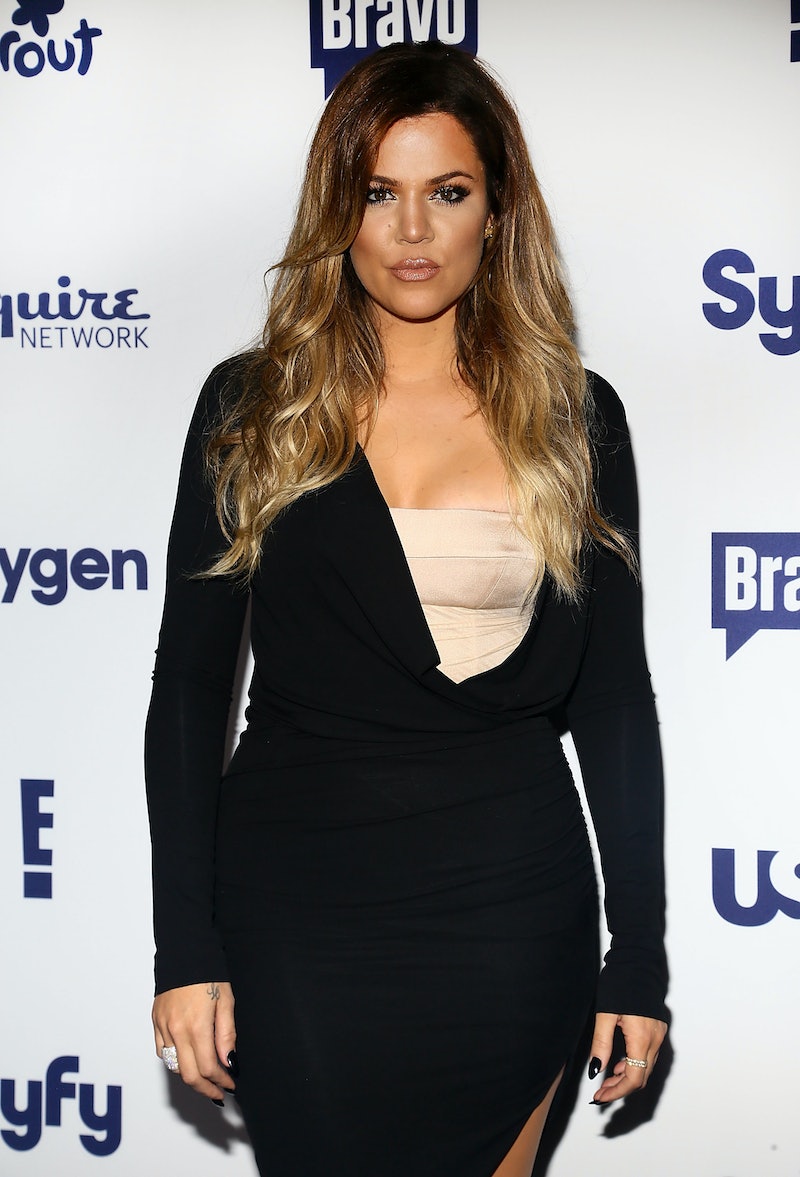 After all the drama we saw between her and still-estranged husband Lamar Odom on Keeping Up With the Kardashians — as well as all the drama between her and French Montana that followed after she began dating him upon separating from Odom — it's safe to say that seeing tabloid stories about Khloé Kardashian's dating life these days usually doesn't mean anything good. However, this time, the news surrounding the reality star's love life is positive, something I'm super happy to report on: According to People, Khloé Kardashian is perfectly happy being single, and finally wants to focus on taking some time for herself after her break-ups with Odom and French Montana.

"I think being single is really healthy for people," Kardashian told People of her love life. "I think people who go into one relationship to another, I don't know if they have a healing process or know what went wrong or how to better themselves."

Yes! Finally! This is exactly what I've been hoping for Khloé since the day news broke that she and French had split up for, like, the millionth time. While I had been happy that she was happy whilst dating French, it always felt like — especially after the massive drama that had gone down during her ongoing divorce with Odom — Khloé needed to take more time to just be at peace with herself before moving on to a new relationship with new baggage. So, to hear her say exactly that now? It's a downright New Year's Eve miracle.

According to People, Kardashian's words came up during an event that French was even present at, and luckily, the former couple kept it cordial and said hello to each other before going their separate ways. Khloé told the magazine, later, "I just want to have fun...Lessons learned? I just want to really enjoy life. I feel like I had a really good 2014. I just want to make 2015 better and better. I just want to win. I just wanted to win at everything I do."

Khloé deserves to be happy after everything she's been through, and this epiphany about the single life really does sound like the best thing for her now. 2015 is already looking up, dolls!

More like this
Khloé Kardashian Debuts Baby Boy On 'The Kardashians' Season 2 Premiere
By Jake Viswanath
Molly-Mae Hague & Tommy Fury Celebrate Pregnancy Reveal In The Sweetest Way
By Sophie McEvoy and Sam Ramsden
Kendall Jenner Thinks Tristan Thompson "Wanted To Trap" Khloé With Another Baby
By Jake Viswanath
Clayton & Susie Broke Up, Citing "A Significant Amount Of Pain" After 'The Bachelor'
By Jordyn Tilchen
Get Even More From Bustle — Sign Up For The Newsletter