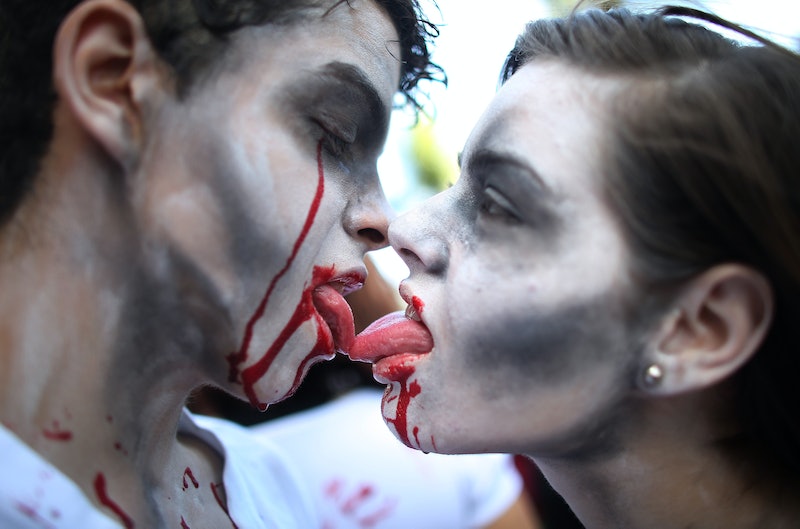 New Year's Eve is the cilantro of holidays. You either love it or you really, really hate it. So much so that you would rather metaphorically spend time picking it out of your life's burrito than just dealing with it. There's a lot of pressure to have fun, drink too much, and have someone to kiss at midnight. Unfortunately, life is nothing like When Harry Met Sally, and the love of your life isn't going to have some life-changing revelation just as the clock strikes 12. If you're anything like me, then midnight means double-fisting champagne glasses and waiting for your best friend to stop playing tongue hockey with her boyfriend so you can get back to wailing Whitney Houston's greatest hits.

Fear not, my fellow solo revelers, the New Year's kiss isn't everything it's cracked up to be. Think about it. The person you're locking lips with probably tastes like Fireball and mozzarella sticks — which is a direct trip down memory lane to those boozey nights in college that ended in 7-Eleven taquitos. Do you really want that?

Despite what the movies tell you, midnight kisses are more obligatory and uncomfortable than they are romantic. Enjoy the fact that you don't have to partake, because your midnight kiss could end up going like this...

1. Lloyd & Mary from Dumb and Dumber

2. Marty McFly & His Mom from Back to the Future

That's the power of love...

3. Luke Skywalker & Princess Leia from The Empire Strikes Back

It turns out that it IS possible for Paul Rudd to be un-sexy. Shocking developments, folks.

Even beyond the circumstances, it's just so... stiff.

Remember this hoo-ha? LIES! ALL LIES!

7. Howard & Beverly from Howard the Duck

8. Alex & Kate from The Lake House

When you want that passionless kiss accompanied by a turtleneck.

Nothing like a tongue splitting your head in half!

Bad acting and punching, all in one.

12. Arwen & Aragorn from The Lord of the Rings

It's bad enough there are elves standing around watching and crying, but Liv Tyler looks like she's in actual physical pain. Relax a little, Viggo.

Paul Rudd, such a heartbreaker! And apparently the king of awkward kissin'.

More like this
Harry Potter's Viktor Krum Has Undergone A Huge Transformation Since Hogwarts
By Sam Ramsden and Meguire Hennes
14 Last-Minute Halloween Costumes That Only Require A Flannel Shirt
By Kirsten Nunez
How To Dress Up As A ‘Squid Game’ Character For Halloween
By Emma Carey
64 Genius Gift Ideas For Every Single Guy In Your Life
By Teresa Newsome, Mia Mercado and Brittany Leitner
Get Even More From Bustle — Sign Up For The Newsletter