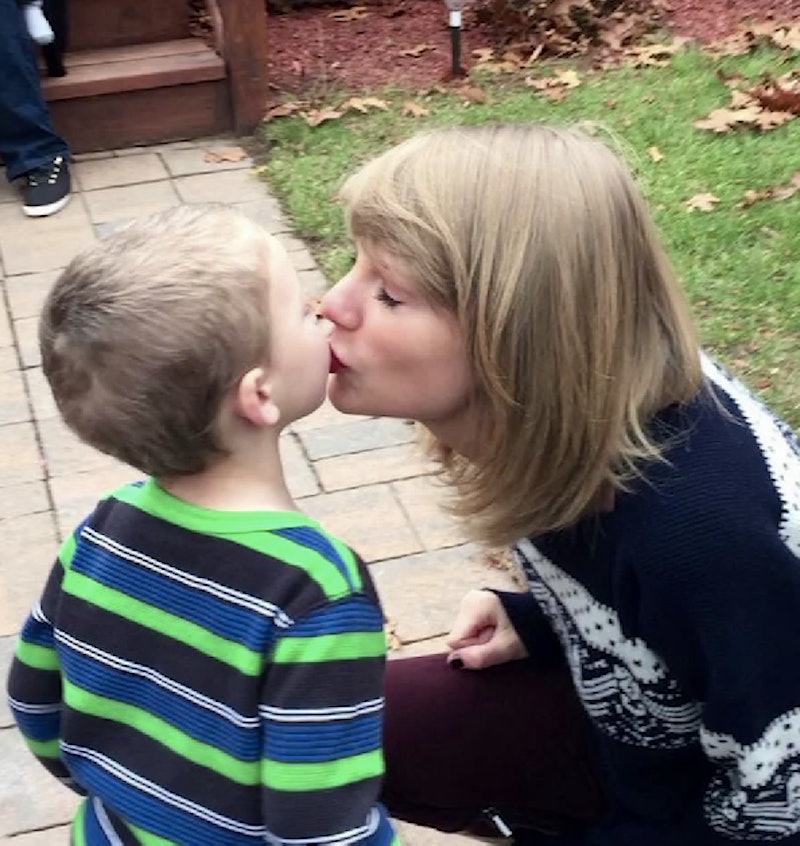 It's no secret that Taylor Swift loves her fans. She invited them over to her house for secret 1989 listening parties this year and then started a trend called "#taylurking" in which she would lurk on fans' social media profiles, leave sweet comments, and share some of their photos and Tumblr posts. She took things to the next level around the holidays, becoming Santa Swift for "Swiftmas," sending boxes of personalized gifts to a handful of fans around the world. Until now, we had only seen some crying video reactions and photos of the gifts she sent, but now Swift has unearthed a complete behind-the-scenes video of her whole process from start to finish. You're going to want to grab a box of tissues, because you will never stop crying after you watch.

"Every detail of a fan's likes, job, whereabouts was studied intently," the video explains before a Law & Order: SVU sound effect chimes. Nice touch from the mom of Detective Olivia Benson (the cat). From there, we see Swift hand-wrapping each gift and boxing them up, explaining certain ones — "Meredith, that is Sophie's blanket," she scolds her cat as Mer lays on a plaid blanket. "I can't even believe this. That is so rude." — and showing her NYC apartment completely covered in wrapping paper. There are plenty of amazing moments, but one of the best (of her solo, at least) is when she wears a Santa hat and sings, "Christmas! I'm Santa Claus!" She then pauses and says, "This is actually a Hanukkah present! It's second day of Hanukkah, so I don't want to miss the whole thing."

The flood gate of tears really opened up for me when the fan reactions started rolling, like how Swift wrote "you're such a shining bright light in my life" in a letter, which a girl read while sobbing. All of them were amazing, but the end of the video was definitely where things reached peak emotional levels. As the angelic singer explains, she hasn't met her fan Steph's son, Layton, yet, so she's going to go hand-deliver some Christmas gifts to all of them in Connecticut. "They have no idea we're coming. They're supposed to be home because they think there's a package that's there's a package going to be dropped off by UPS... but UPS is me," she says into the camera before surprising them. Among the gifts is a little car that Layton can drive around the sidewalk, but Swift takes it for a spin first before he gives her a big ol' kiss. And with that being said, everyone's hearts grew three sizes today. Merry Swiftmas, everybody!