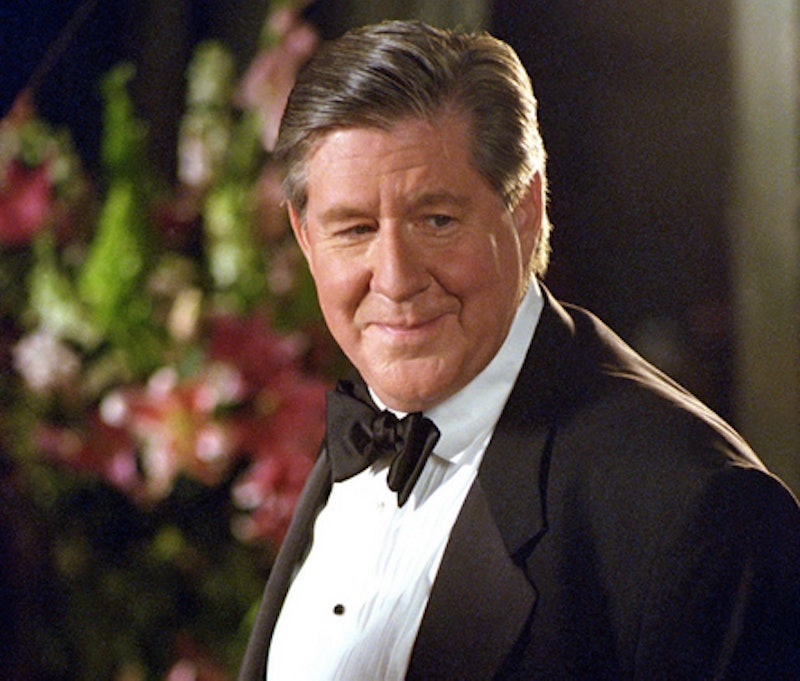 There are a few things I firmly believe in when it comes to the late, great Gilmore Girls — Lorelai probably could've afforded Chilton if she didn't order so much take-out, Rory and Jess belong together, and Richard Gilmore is the most underrated character on the series. Yes, the Gilmore patriarch is one of my favorite characters. So, following the heartbreaking news that Edward Herrmann died at age 71 after a battling brain cancer, I naturally thought of Richard. There are plenty of great Gilmore Girls episodes — I mean, the show went on for seven seasons — just as there are plenty of top-notch and witty moments starring Herrmann. But, the best of the best Richard Gilmore episodes is easily the Season 1 "family" reunion at the Gilmore's, "Christopher Returns."

Over the course of Gilmore Girls' lengthy run, Richard was witty, Richard was a softy, and Richard was the worst. (Another thing I believe about this show — no one is great all of the time and sometimes they're never great. Ever.) But Richard's finest moment and why this episode is easily his best came when he defended Lorelai in front of Strobe and Francine Hayden. Yep, I'm talking about that episode, when Christopher returns and everyone thinks it's a brilliant idea to throw the Gilmores and the Haydens into the same room for the first time since Lorelai got pregnant at 16 and she and Christopher threw caution to the wind. As you can imagine (or if you're a Gilmore Girls fan — as you know), it did not go well.

But, regardless of his own pain from his daughter's decision to keep herself and Rory away from him for 16 years, Richard jumped to her defense like only a father can when Strobe started to tear into Lorelai's character. It's unexpected to see Richard fly off the handle, but it's heartwarming — even considering that Richard and Strobe almost get physical — to see the paternal side of Richard come out.

I know what you're probably thinking — what's so special about a father defending his daughter? Well, first of all, Richard and Lorelai don't exactly have that kind of relationship nor do they show those feelings towards each other — so, in that respect, this is kind of a big deal. But what really makes this episode the best for Richard is what happens after he throws the Haydens out of his home. When Lorelai comes to thank Richard for standing up for her, Herrmann gives a rough and vulnerable speech about the hurt he felt when she left home, the "hell" he and Emily went through, and how things certainly are not OK, even if he stood up for her. And, for the first time on Gilmore Girls, we really see exactly what destruction Lorelai left behind and how, regardless of how she disagreed with how she was raised, her parents love her. Richard loves her — even if she refuses to remember that — and Herrmann's performance makes "Christopher Returns" his best episode.