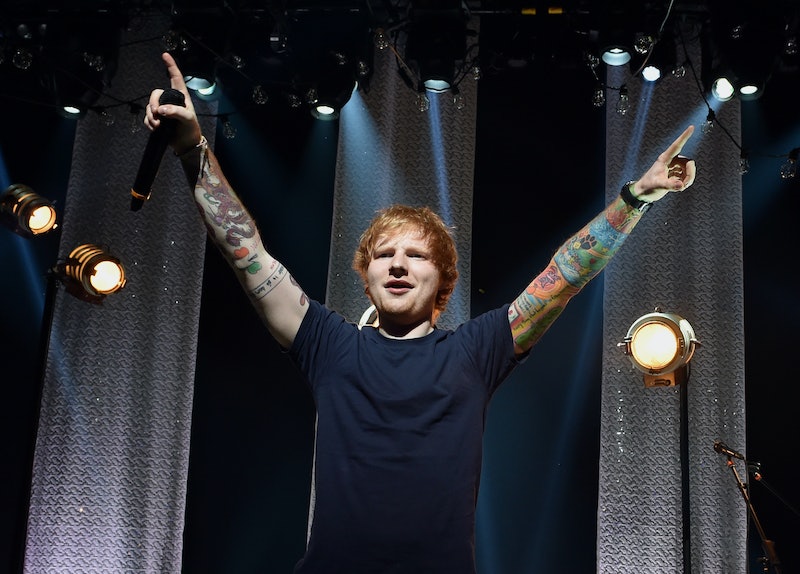 The final hours of 2014 are steadily ticking away and while many will hit the streets to party straight into next year, Ed Sheeran seems to have found a great reason to stay in on New Year's Eve. In true pop star fashion, the 23-year-old singer’s last celebration of the year won’t be as simple as scrolling through Netflix options while guzzling wine straight from the bottle, Sheeran New Year’s Eve plans involve One Direction and cats. Yep, sounds like he'll be ringing in 2015 in the company of his bros and pets.Well, not really. In the photo Sheeran posted on Instagram, there's a nicely decorated table for the occasion, complete with paper plates bearing the adorable faces of bow tie wearing cats and a One Direction tablecloth. (Where would you buy such a thing?) Of course, the table is equipped with enough booze to put all the party guests to sleep for the next couple of weeks, and there are empty chairs, so I'm assuming 1D might actually show up. Who knows.What is clear is that Sheeran knows how to throw a house party. With the excitement of New Year's Eve, an impressive selection of alcoholic beverages, good company, and a great singer under one roof, this night is full of potential.

Here's what could happen:

Beautiful Music Will Be Made

I predict a crazy spur-of-the-moment song and video like Beyoncé’s “7/11” will mysteriously appear online shortly after the clock strikes midnight. Instead of kale, the supporting roles will go to cat plates and 1D table cloth cutouts.

Sheeran's Christmas tree is in the background of the Instagram photo he shared, so let's hope it can withstand any of his drunken antics.

The last time he had too much to drink, he accidentally started a fight with Miley Cyrus. Hopefully he plays it cool on social media and doesn't do any interviews. Starting the new year with another feud is a definite don't.

1D Will Appear Out of Nowhere & Drunk Dial Taylor Swift

It'll be like one of those magical holiday movies where 1D springs to life from the table cloth, but the night will go awry when Harry Styles suggests a round of drunk-dialing mischief.

Sheeran Will Have a Totally Laid-Back New Year's Eve

Perhaps he was just showing off for Instagram and really plans to play video games and hang out with his cat, which might be his safest bet.

More like this
Everything To Know About Taylor Swift’s 10th Studio Album, 'Midnights'
By Grace Wehniainen and Jake Viswanath
Taylor Swift Wants To Direct A Movie Next — But You Might Have To Wait
By Radhika Menon
Olivia Wilde & Harry Styles' Relationship Timeline Started With 'Don’t Worry Darling'
By Jake Viswanath
Twitter Is Freaking Out Over Rihanna’s 2023 Super Bowl Halftime Show Announcement
By Stephanie Topacio Long
Get Even More From Bustle — Sign Up For The Newsletter