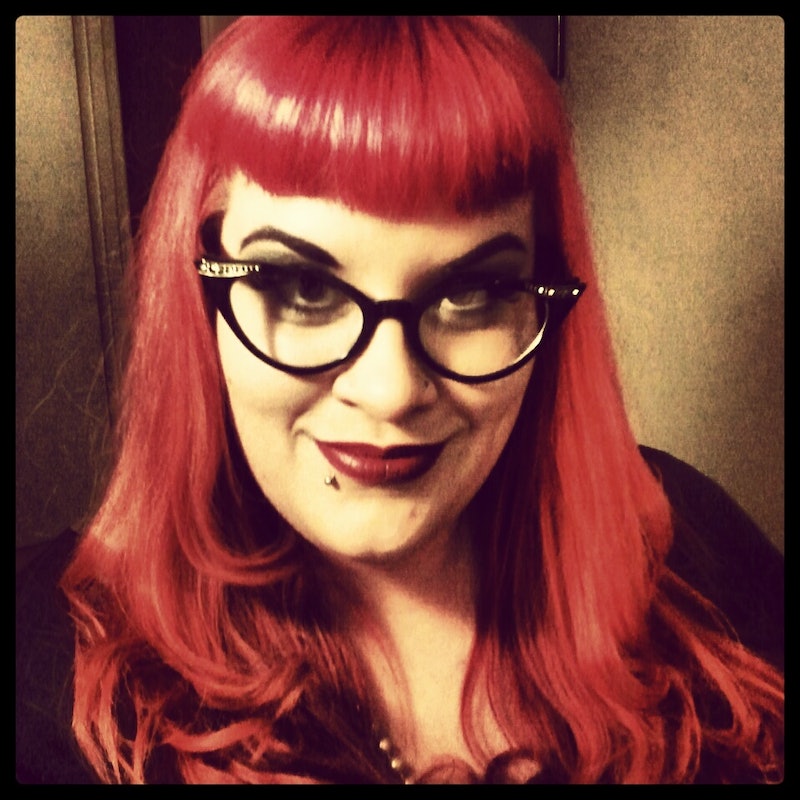 I have always been quite pale: I inherited my mother's Irish complexion, along with her hazel eyes and mousey, coarse, thick hair. So growing up, I was always envious of my sister, who had received her olive skin tone, dark eyes and beautiful, dark hair from my father. The only thing I inherited from him was his excessive body hair. Thanks Dad — that's awesome.

As I got older, my pale skin became more noticeable as the vogue for tanning gained popularity and my Caucasian peers became golden while I remained a milky alabaster. Friends would make helpful suggestions that I try it, but I could never get the permission.

My paleness became an asset in my mid-teens as I went through my goth, and then emo phases (which both favored an almost transparent skin tone). The contrast with the tons of black eyeliner and black lipstick had an almost monochromatic effect, particularly when teamed with my dyed black hair. Oh, to be that young again.

Skin tone can be a rather sensitive topic for many people. For women of color in particular, there exists stigma associated with being "too dark," and some women take measures to lighten their skin using bleaches. It goes without saying that perceived beauty has nothing to do with skin tone: There are stunning people of every color, shape and size. My being "too pale" is obviously greatly offset by the fact that I have white privilege — a fact that is not lost on me. So this article is not a list of complaints around being "too white." But rather, a list of some things people with seriously pale skin will recognize, understand and maybe laugh about, too.

2. FINDING A SHADE OF FOUNDATION OR CONCEALER THAT DOESN'T COST THE EARTH IS IMPOSSIBLE

Not even "ivory" or "porcelain" shades are light enough.

3. AND IF YOU CAN'T AFFORD A LUXURY BRAND YOU HAVE TO APPLY A CHEAPER, DARKER SHADE ALL THE WAY DOWN TO YOUR CHEST

Or risk the dreaded tide lines!

4. PEOPLE THINK YOU ARE ILL WHEN YOU ARE PERFECTLY WELL

And when you are actually ill, they think you are a corpse.

5. WEARING DARK EYE MAKEUP OR LIPSTICK AUTOMATICALLY MAKES YOU LOOK LIKE A GOTH

Both at once? Just call me Marilyn.

6. YOU CAN GET SUNBURNED EVEN IN WINTER, WHILST WEARING SPF 100... AND A ONESIE

I'm serious. Even in Canada.

7. AND ONCE THE SUNBURN HAS HEALED, YOU STILL DON'T HAVE A TAN

All pain, no gain.

8. GOING OUTSIDE IN THE SUMMER WITHOUT SUNSCREEN IS ABSOLUTELY OUT OF THE QUESTION

9. YOU HAVE A COMPLETELY JUSTIFIED FEAR OF FLASH PHOTOGRAPHY

10. "FLESH" COLORED TIGHTS MAKE YOU LOOK LIKE A FIGURE SKATER

And not in a good way.

11. "FLESH" COLORED ANYTHING IS A LIE

12. BY THE END OF WINTER YOU ARE PRETTY MUCH TRANSPARENT

Cue Casper jokes every day for the next three months.

13. PHYSICAL EXERTION RESULTS IN LOOKING NOT UNLIKE A GIANT TOMATO

More like this
Instagram & Facebook May Finally Lift Their Notorious Nudity Ban
By Allie Fasanella
The Case For Using Your Fanciest Beauty Products Every Single Day
By Carolyn Steber
Wavy Hair Girlies Rejoice, Rhyme & Reason’s Wave Revival Regime Is Here
By Darshita Goyal
6 Asian Beauty Rituals That Will Soothe Your Skin, Scalp & Mind
By Jennifer Li
Get Even More From Bustle — Sign Up For The Newsletter
From hair trends to relationship advice, our daily newsletter has everything you need to sound like a person who’s on TikTok, even if you aren’t.