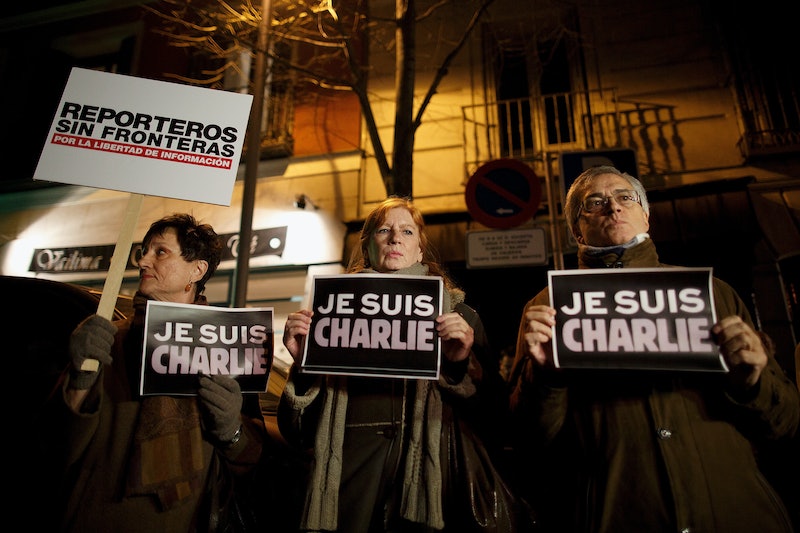 Writing is about the freedom of communicating ideas, whether it's through novels, journalism, or comics, or any other medium. Dozens of acclaimed writers have joined together alongside PEN American to condemn the murders of Charlie Hebdo journalists in Paris under this ideal. Wednesday morning, three men armed with automatic weapons attacked the offices of the satirical newspaper Charlie Hebdo, killing 12, including the publication's editor Stéphane Charbonnier and cartoonists. The attack seems to be in response to the newspaper's long history of publishing cartoons depicting the Islamic prophet Muhammed, which is prohibited by Islam. The gunmen were allegedly heard shouting "Allahu akbar" as they entered the office.

In the spirit of the freedom of expression that Charbonnier and Charlie Hebdo embodied, distinguished writers across the globe released a statement against the attacks with PEN American. Michael Chabon, Junot Diaz, Louise Erdrich, Jennifer Egan, Neil Gaiman, Woody Allen, Colum McCann, Malcolm Gladwell, and several more authors signed a the statement below:

As writers, editors, and artists we stand together today in solidarity and outrage at the murder of our colleagues at Charlie Hebdo in Paris. This attack on cartoonists, writers, and editors is an attack on free expression worldwide. It is an attempt to terrorize and intimidate all of us in order to inhibit the free flow of ideas.Peaceful coexistence within diverse communities requires a climate of tolerance and an open exchange of views that includes criticism, humor, and hyperbole. The right to satirize, to question, to expose, to mock, even when offensive to some, is a bulwark of a free society. Today’s bloody retribution for the drawing and publishing of cartoons represents a terrifying challenge to these values of tolerance.

Together, these writers also called upon international governments, religious leaders, and civil institutions to all band together and condemn these attacks alongside them. And they also called upon these groups to address an issue that hits close to home:

We call upon responsible authorities and institutions to redouble their efforts to protect those working on the front lines of free expression worldwide who put themselves at personal risk to voice controversial viewpoints. Today’s effort to silence criticism by murdering the artists and writers who voice it must be met with a far wider movement to defend the right to dissent, which forms the spine of free expression.

British-Indian writer Salman Rushdie also signed the statement with PEN American, and he went further, publishing his own column in The Wall Street Journal showing his support for Charlie Hebdo. Rushdie himself also suffered death threats from religious extremists. After he published The Satanic Verses, Iran issued a fatwā calling for Rushdie's assassination in 1989. Rushdie's statement in WSJ also defends writing as a force of freedom:

Religion, a mediaeval form of unreason, when combined with modern weaponry becomes a real threat to our freedoms. This religious totalitarianism has caused a deadly mutation in the heart of Islam and we see the tragic consequences in Paris today. I stand with Charlie Hebdo, as we all must, to defend the art of satire, which has always been a force for liberty and against tyranny, dishonesty and stupidity. ‘Respect for religion’ has become a code phrase meaning ‘fear of religion.’ Religions, like all other ideas, deserve criticism, satire, and, yes, our fearless disrespect.

As writers and readers and thinkers ourselves, we, too, must stand by Charlie Hebdo and the freedom of expression. Je suis Charlie .