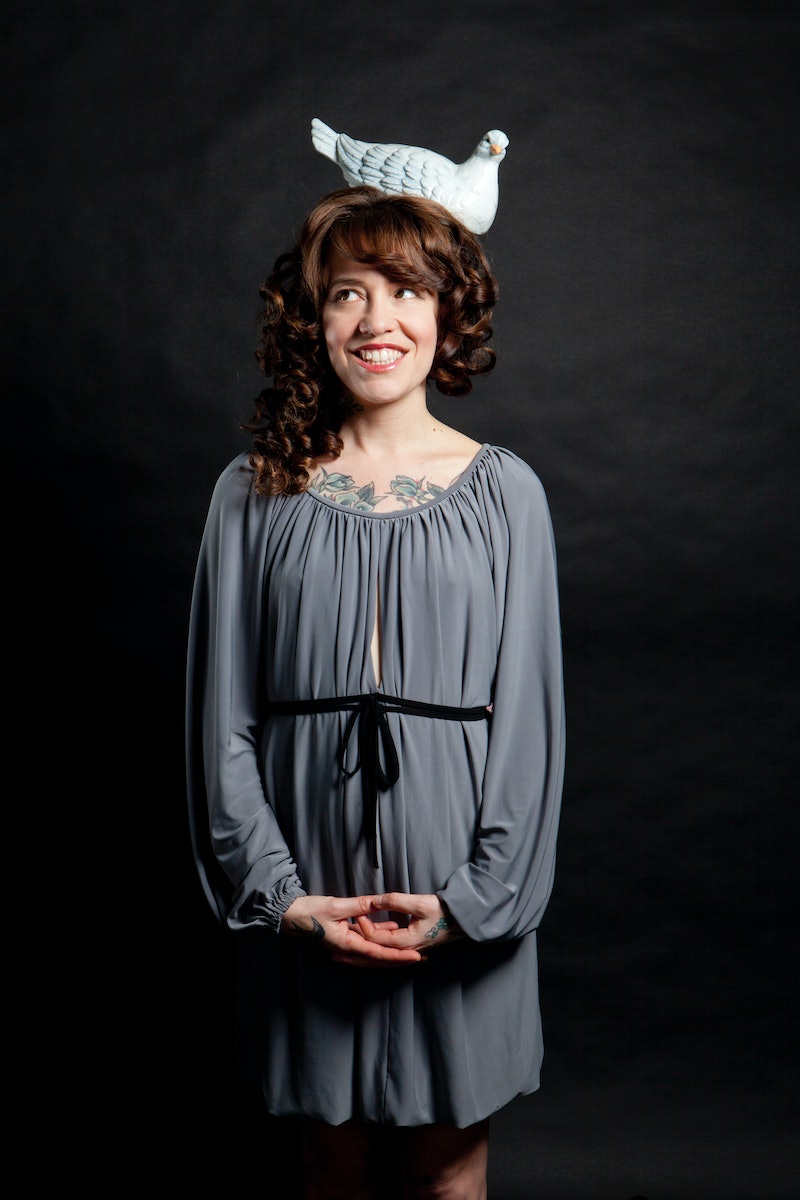 Fans of Michelle Tea’s memoirs Valencia and Rent Girl will definitely see a different side of her with her new book How To Grow Up (Plume). Instead of writing about drugs, drinking, prostitution, and surviving on no money in the San Francisco of the late 1990s, she’s talking about fawning over Fendi bags at Paris Fashion Week, falling in love and getting married, and trading in the chaos and toxicity of her 20s and 30s for something a little more peaceful — something like adulthood.

That’s not to say that How To Grow Up is a happy-go-lucky manifesto about how great her life has become. Tea’s honest, funny, sharp voice is still there, and her struggle with alcohol and drugs is woven into every chapter. It’s that struggle, and her ability to climb out of it and find happiness, that makes you root for her, and relate. “Alcoholics aren’t the only ones who need help; we’re just the loudest and messiest,” she writes.

How To Grow Up is darkly funny, poignant, and inspiring without veering into cheesy self-help territory. Tea shares advice and insights about relationships, breakups, money, the merits of taking the long and winding path to adulthood, and feminism. “When feminism felt like it was bumming out my reality, it was time to redefine what a feminist was,” she writes in the chapter “I’m So Vain.” Similar to Roxane Gay’s Bad Feminist , How To Grow Up embraces contradictions: You can obsess over wrinkle creams and cry at the sight of a beautiful purse and still be a feminist, obviously. Sometimes you just have to grow up a little bit to realize that fact.

After blogging about her struggle to get pregnant, Tea and her wife now have an infant son. In addition to her memoirs and poetry, she’s published a young adult fantasy series, and she founded RADAR Productions, which organizes literary events and nurtures queer artists and their stories.

I spoke to Tea about memoir versus fantasy, her new outlook on life, and what it means to grow up.

BUSTLE: This book is really a celebration in a way, and I love that you say your most common prayer is, 'Holy sh*t — thank you.' How was the writing process different this time around?

MICHELLE TEA: It’s the first time I’ve ever worked on a piece of writing where I’m writing about things being kind of great. It’s not my experience framed against a context of some sort of struggle or rebellion. As a writer it’s always easier to write about things that are kind of terrible than about happiness, but I kind of got into it.

What inspired you the write the book?

I came up with the idea just brainstorming with my agent and trying to figure out what my next project would be. I’m always compelled to write about my life; it’s just how I’m wired. It took me a minute to see if there was a story there because things have been so nice and I’ve been so progressively settled down. It doesn’t always have to be all about tough times, although there are tough times in the book, just from a different perspective.

You’re definitely in a different place with this book than you were in your past memoirs — you’re writing about fashion and Botox and green juices these days. Have you gotten any reactions about the book yet from some of your longtime readers?

Some readers are going to be bummed about the Botox, I’m sure. There was a great review in ELLE and a great review in Mother Jones, so I feel like I’ve got all bases covered. I feel like if you think of me as a character in my book I’m fairly easy to root for when I’m in my twenties and I’m a little gay person in the '90s and I’m being rebellious and looking for love. It’s easy to root for a person who is coming from that place. You kind of become identified with the struggle.

It’s not enough to just have the story — you have to set the scene and make it readable.

I loved how honest you were about Botox, for the record. Is that how you approach memoir — by thinking of yourself as a character?

I’m telling my story but I’m also seeing my story through a more cinematic lens. The angle I’m taking is looking at my life as if it were a movie. It was an empowering thing for me to do when I thought my life was a little speck in the world, to see myself suddenly as a mythological character or a character in a movie. It made the struggle I was going through a lot more noble and bearable. It gives me a bit of detachment. It’s not enough to just have the story — you have to set the scene and make it readable.

Is there a chapter or a part of the book you’re most proud of, or that’s closest to your heart?

I feel like when I write I’m in some sort of fugue state. It’s so weird. I’m proud of it because I was trying to write something that would appeal to a wider audience and at the same time be truthful to who I am, which is a person who has certainly not appealed to a wide audience. I feel like I kind of did it, and managed to do it in a way that I hope is accessible without totally cheesing myself out. When I’m in the middle of writing something I’m like, This is terrible! It seems so awful always, but I can look at it now and think I did what I was hoping to do.

When I’m in the middle of writing something I’m like, This is terrible! It seems so awful always, but I can look at it now and think I did what I was hoping to do.

Is there any difference for you when you’re putting a memoir out into the world as opposed to putting out a work of fantasy or fiction?

The readership I have for the memoirs is larger. Even though the content of the memoirs is more uncomfortable, I am most comfortable writing memoir. It’s a weird thing. I’m most in my element with a book like this, and I love writing the [fantasy] books as well. But I feel like this is more what I’m made of.

You blogged about your experience trying to get pregnant, and you talk about it in the book as well. Now that you’re a mom, has your idea of adulthood changed at all?

I don’t know if having a baby has changed my definition of being an adult, but I feel like I definitely have achieved that definition just because I’ve been able to have this little guy and show up for him and make it work. It changed my life a lot. I guess there’s no getting around that if you have a baby your life is more adult. But then, look at 16 and Pregnant on MTV. Anyone can have a baby. It’s funny because being with him and envisioning what our life is going to be like as he gets older — as much as I’m leaning on my adult skill set I also feel like I’m leaning on that other part of myself, because that part is way more relaxed.

Right now I’m living a more structured sort of life, and back then my main motivation was adventure.

What do you think 25-year-old Michelle would think if she read How To Grow Up? Would she be surprised?

I don’t think she’d be terribly surprised. I knew even in my twenties that I would probably have to stop drinking some day. It was a vague little thing in my mind. I think I would be mad at myself for electing to turn down some cool opportunities that I turned down when I was pregnant that I responsibly said no to that the 20-year-old Michelle would have been like, What? You’re not going to Brazil? It doesn’t matter if you’re pregnant, you’ve just got to go! Right now I’m living a more structured sort of life, and back then my main motivation was adventure.

The structured life of a new mom.

Having a baby is a huge adventure. It’s funny because it’s such a common thing, people have babies all the time, but having one is the craziest thing. It’s kind of a different adventure.