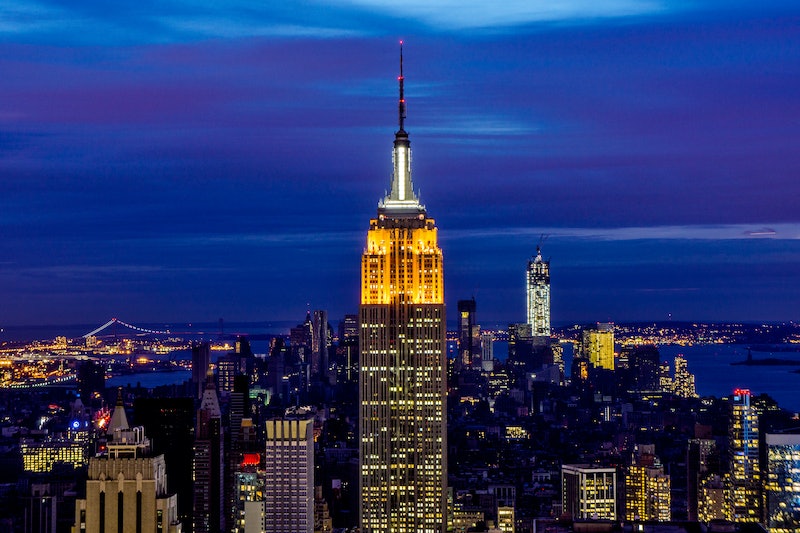 Sixty-two days, six hours, and thirty-three minutes. At the precise moment that I am typing this sentence, that is how much longer I have to wait before I can move to New York City, and even that wait is a small fraction of how long I've waited in my entire life. Right after college, I watched dozens of my friends (mostly actors) hit the Big Apple, and that might have been my story, too, but I just had a feeling that it wasn't my time yet. Well, brace yourself, New York, because you've got five feet and four inches of awkward coming at you in March and I am basically acting like an overly-excited, poorly-trained labradoodle about it.

Like so many New York wannabes, the first time I experienced the city, I was in love every bit as much I was terrified out of my mind. I've been told that right now I'm in the sweet spot: I visit the city just often enough to soak in the glamour but conveniently catch the Megabus home just before I get saddled with New York-y things like aggressive catcallers, prolific traffic, and monthly rent that costs about the equivalent of buying my own Chuck E. Cheese franchise. Well, I'm ready for whatever the city can throw at me (I think). What I wasn't QUITE ready for was the series of crazy obsessive thoughts that run through my head at all hours as I am counting down to the epic move:

The FOMO is never more intense than it is when you are waiting to move to New York. Do you know how many flash mob dance proposals I've seen in my entire human life?! NONE. And while the non-New Yorkers like me sit waiting in their little suburban holes, the city slickers of NYC are collecting cool stories like that one time they saw Harry Styles on the street (THIS HAPPENED TO AN ACTUAL BUSTLE PERSON), or that one time they stumbled into the background of a movie being filmed, or all those "ONE TIMES" that fill me with an envy greener than Al Gore's global warming lectures. Wanting to be in NYC is like a perpetual state of being late to a party you couldn't believe you were cool enough to get invited to in the first place.

"Would a New Yorker wear this?"

I just started shopping again for the first time in six months, so there is a lot of performance pressure on the clothes front right now. I'm pretty fashion-incompetent to begin with, so last week, I took a dressing room selfie (not sorry) and sent it to a New Yorker friend with, "Is this dress "New York" enough?" and she was like, "HAHAHA Emma you crack me up" and I was like, "AHAHAHA I KNOW but no, seriously, this is not a drill".

The same way little children have visions of sugar plums, I have visions of emerging from my future NYC apartment with a cat that I don't actually own, as flawless as Taylor Swift herself. And while I'm still agonizing over wanting to move to the city this fantasy CONSUMES me.

I've already accepted that New Yorkers in my income bracket live in glorified closets, and have started treating my life like a 24-hour rehearsal for it by ruthlessly giving or throwing away everything in my path. It makes me feel super #NewYork even though I am still living in a super spacious bedroom. (Side note: if anyone needs a bunch of stuff so pink that even Hello Kitty would cringe, I'm your girl.)

"Must absorb as much NYC as possible through HIMYM and Friends reruns."

I'm fully aware that sitcoms are not at all an accurate portrayal of actual New York, but I'm going to pretend that they are to justify the intense Netflix binging I have done in the last few weeks. When you're dying to move to New York, these cheery laugh track littered shows are about as close as you can get to the real thing.

"How the hell do I put on matte lipstick?"

I have been to exactly two fancy parties in New York, and being the total doofus I am, I came home wide-eyed each time about how everyone's lipstick stayed flawless even though they were eating just as much cheese and guzzling just as much wine as I was. It was up to my 17-year-old sister to deliver the long overdue news that matte lipstick was a thing that existed, which inevitably led to me getting super ambitious about it. I'm getting better at it! Focusing on lipliner takes just enough focus that I sometimes forget for five seconds that I'M NOT IN NEW YORK.

"I have no idea how to subway. How does a person do subway?"

Look, I've done the subway thing before—when I've had actual New Yorkers with me, that is. The one time I did it alone, I swear to God, one of the passengers was reading my mind, because that boy leaned over to me after my thirteen or so minutes of looking perilously confused on the train and said, "If you're trying to get off at Union Station, that's where we are right now." (Translation: "I'm pretty sure Union Station is the only possible place you could be going, because I smell the tourist on you the way hunting dogs smell prey.")

In my defense, I have mastered the DC Metro, and I have even conquered the Paris metro, which is saying something because I was in a city where I didn't even speak the language. But to me, subway maps genuinely look like something a toddler enthusiastically scribbled at daycare. And while I'm totally aware that I am in suburbia right now and this is not a thought that should keep me up late into the night, it happens anyway. (Yes, I am aware Google Maps is a thing and it will help me. I'm still more lazy than panicked right now so I haven't looked into it.)

"On a scale of 1 to vomiting on someone else's shoes, how uncool is it to have Taylor Swift's "Welcome To New York" stuck in my head on a near constant basis?"

Asking for a friend.

More like this
The Spiritual Meaning Of Angel Number 000, Explained
By Kristine Fellizar
The Real Reason Your Instagram Story Viewers Show Up In That Order
By Emma Carey
15 Halloween Costumes Inspired By TikTok Trends
By Emma Carey
Why TikTok Is Obsessed With Caesar Salads Right Now
By Alexis Morillo
Get Even More From Bustle — Sign Up For The Newsletter