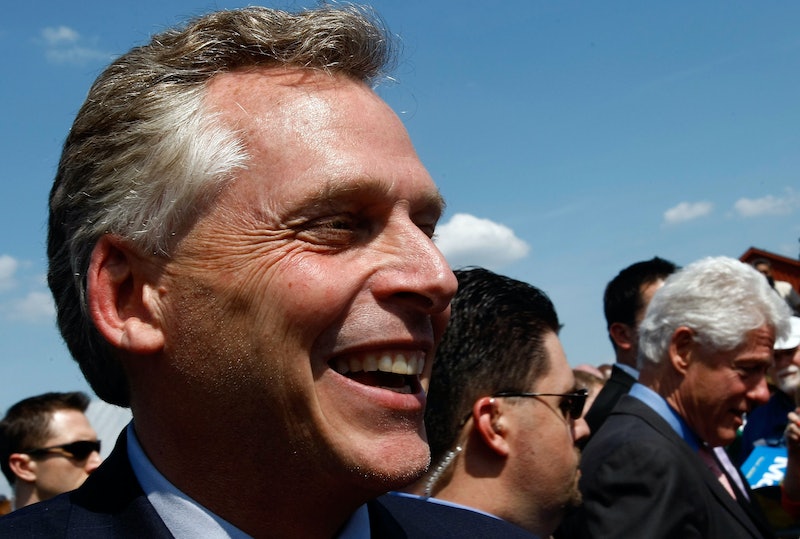 The Virginia Gubernatorial campaign is one of the highest profile races in the country this year. It's a battle of political heavy-hitters in a state that tends to be a close call in presidential elections (though it's gone blue in the last few cycles, in spite of having a Romney surrogate, Bob McDonnell, as Governor). The VA Constitution prohibits governors from serving successive, consecutive terms (the only state to do so), so the two candidates facing off in November are Ken Cuccinelli, the current Attorney General of VA and a former State Senator, and Terry McAuliffe, former chairman of the DNC.

As the campaigns grind down to their final pushes, a lot of the discourse from the McAuliffe side has concerned Cuccinelli's questionable voting record when it comes to women's issues. In September, the McAuliffe campaign ran a campaign ad accusing Ken Cuccinelli of trying to limit women's ability escape bad marriages when he was a State Senator.

Current Virginia law allows spouses to file for divorce if any of the following conditions are met: adultery, a felony conviction, cruelty or fear of bodily harm, willful desertion, or voluntary separation of one year (if there are minor children) or six months (if there are no minor children). The McAuliffe ad referenced a bill Cuccinelli, then a state senator, sponsored in 2008 (it died in committee). The bill would have prohibited a spouse (in a couple that had minor children) from unilaterally filing for divorce by invoking the separation clause. The bill never made it out of committee, so the concern is merely speculative.

With respect to the campaign, an article by Politifact says that it's an attempt by McAuliffe to paint Cuccinelli as anti-women, and that it's "half true" at best. A DoubleX post by Slate's Amanda Marcotte says that it's a crucial point to bring to the attention of VA voters.

The end result of that bill, had it passed, would be to do away with Virginia's no-fault divorce law. A no-fault divorce is exactly what it sounds like. In legal-ese, it is a divorce in which neither spouse is required to prove "fault" or marital misconduct on the part of the other. It only becomes at all important or controversial when one examines the implications: if no one is at fault, then no one can fight the divorce proceedings. This makes it an incredible tool for women (and men) involved in abusive marriages. No-fault divorce laws ensure that an individual involved in a bad marriage can file for divorce without having to prove their case in front of judge. It ensures that their spouse can't refuse, because their spouse isn't being accused of anything.

In 1969, California became the first state to implement a no-fault divorce law. In 2010, New York became the last, ensuring that a married couple in any state is free to file for divorce without having to provide evidence to a judge of spousal abuse, adultery, or other marital misbehavior.

Regardless of the VA Gubernatorial campaign, state bills like the one Cuccinelli proposed are a massive deal. Doing away with no-fault divorce would chip away at decades of precedent allowing men and women the autonomy to decide when a marriage isn't working without having to rely on court-determined definitions. No-fault divorce laws are what allow individuals trapped in bad marriages to get out without a lengthy and costly legal battle. These laws keep decision-making power in the hands of the couple in question, not in the hands of a judge or jury. They keep costs down for marital courts. Especially now, as we (finally) expand the legal definition marriage to include same-sex couples, these laws are critically important in ensuring every couple's right to a civil, adult divorce, which (if the current divorce rate is any indicator) is just as important as ensuring every individual's right to marry.