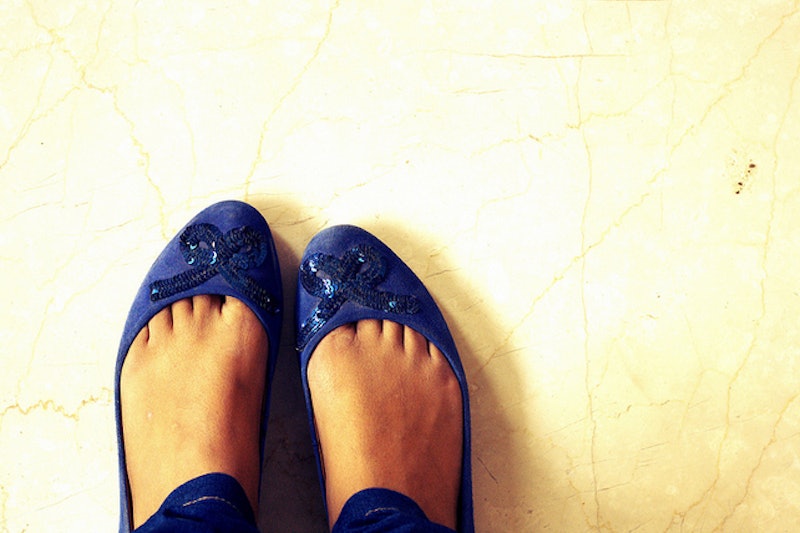 I may be single, but the last thing I have time for is worrying about it, or even thinking that singlehood is inherently a thing to be worried about. There's already so much else crammed into the "Worry" folder in my brain. At any given moment, Netflix could yank Friends out from under us, or Blake Lively's baby could start her plot for world domination years ahead of schedule, or the Dunkin Donuts near my house could shut down. I DON'T HAVE TIME FOR MANY OTHER CONCERNS, YOU SEE. Namely, the concerns that everyone assumes single women have. All those things that everyone thinks single women are sitting around agonizing over? They actually they hardly ever (if ever) cross our minds.

That being said, it's perfectly OK for single women to be worried about things that society assumes they worry about. It doesn't make you a cliché or any less "strong"—it just makes you human, and you don't have to make any apologies for that. But I notice that in the general media, there is this idea of the Stereotypical Single Woman (often the side-plot, quirky best friend/sidekick to the gal who actually gets the guy!), and she is frequently consumed with worries about things that, in reality, most single women aren't all that concerned about, including (but sadly not limited to) the following:

On some level, all of us care about what we look like. Hell, even monkeys can't help from checking their own butts out in the mirror. But it's ridiculous to assume that single women are more concerned about their appearance than other people are. This thinking is clearly based on the erroneous assumption that, if a woman is single, she is actively, desperately looking for a partner, AND the assumption that the degree to which someone cares about their physical appearance is tied to how they want to be seen by potential mates. Wrong on both accounts: Being single is not synonymous with being on the prowl, and there are a hell of a lot of reasons to care about looking good that have nothing to do with dating. Also, your appearance doesn't dictate whether you're in a relationship or not, and implying otherwise is devaluing not only to single women, but relationships in general. We worry about our looks a normal human amount and know that they are not a factor in whether or not we happen to be dating.

What our parents, relatives, and older mentors think

I hear a lot more people complaining about their relatives mentioning their relationship status than I actually hear the relatives mentioning them. Even if they do bring up your lack of a significant other, we know that sometimes a casual question is just a casual question. Maybe the whole, "And are you seeing anyone?" queries are just our loved ones' attempt at showing an interest in our lives. Just because THEY can't think of anything more diverse to ask about than your love life doesn't necessarily imply that they judge YOU for have a more dynamic existence. And even if it isn't a surface question, we're not concerned with our single-dom somehow rocking the family boat. They just want what is best for us, and even if our views on what is best occasionally clash in the relationship department, none of us are really staying up long into the night wondering what we'll say to Aunt Sue when they ask us if we're "seeing someone". (In fact, I like talking about myself, SO THERE. Bring on the questions!)

If anything, I feel like single ladies have reclaimed this holiday for their own. I was in a relationship for exactly one Valentine's Day in my life, and it was this big parade of getting dressed up and walking several miles in heels to get laughed out of all the fully-booked restaurants in town before walking several miles BACK to eventually do what we should have just done in the first place: eat at Jimmy John's and watch Netflix in our pajamas. Believe me, most single ladies do not dread Valentine's Day. In fact, we relish not having to buy anything for anyone or even put on pants. It is a human's natural state of being.

Being "always a bridesmaid, never a bride"

No single woman ever resents their friends for getting married first. In fact, we are too busy heartily enjoying the free cake, alcohol, and dancing with other single strangers for this outdated thought to cross our minds. Those of us who see marriage in our future know that our time will come, and don't waste our energy worrying about it during a celebration.

That we'll forget how to be good at sex

I'm sorry, but single women have some of the best sex lives in the world, so this is really hardly even a point. And even for those of us who aren't really into casual sex outside of a relationship, there are still plenty of ways to keep on our game. There is no better teacher than pure attraction to somebody. Single ladies might make jokes about being "out of practice," but deep down, we know that when we meet someone we feel that kind of attraction to, it's all going to click into place the way it did the other times we were attracted to someone. There is no one prescribed way to do the sexytimes anyway, so it's not like we would be "on our game" or something if we were actively doin' it in a relationship right now.

The state of our eggs

First of all, not all single women even want children. But the ones who do? It's 2015, bub—there are a hell of a lot of ways to make a baby that don't involve lassoing a man before our biological clock explodes. More women are waiting longer, and feeling increasingly empowered by greater awareness of their age-irrelevant and dude-optional reproductive options like freezing our eggs, buying a stranger's sperm, or adopting. Some of us more (not saying me, but not NOT saying me) have even picked out guy friends of their superior genetics (i.e., are Team Peeta and can carry a show tune) and are fully prepared to accost them later in adulthood (I'm only semi-joking). But seriously, the idea that a woman has to wait around for someone else to have a kid is totally extinct.

This is one of the most apocalyptically sabotaging thoughts a person can have in the first place: Being alone at the present moment doesn't mean that you'll be alone for good, and it is way off-base to assume that single women are biting their nails to the quick waiting at the windowsill for someone to rescue us from loneliness in the meantime. Most of us—believe this or not, but seriously, just please believe it—are single by choice anyway . We are driven by many aspirations, not all of them relationship-oriented, and know that just because we aren't actively looking for someone right now doesn't mean that we never will. But I also find this misconception offensive because it implies that single women need a partner to be fulfilled. Our lives can be every bit as meaningful and beautiful for our own sakes—life doesn't cease to be valid until its shared with someone else. Regardless of whether or not we see ourselves with someone in the future, we really don't spend a lot of time consumed with worry about forever. And honestly, we kind of wish you would stop spending so much time worrying about our singleness too.