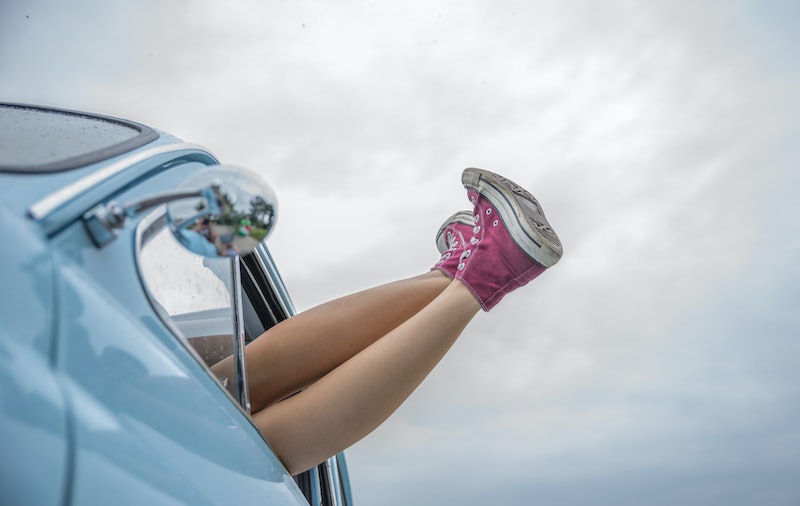 So, no, I can't condone it, but of course I've had sex in risky places. I used to be pretty into it, actually, but I was mindful to only engage in very specific circumstances: When I was in a semi-public place; when there was not even the remotest chance anyone under the age of 18 could walk by; when I was into it and so was my partner; when I was pretty damn sure I wouldn't get caught. When circumstances aligned, I would seize that chance because, for me, public sex could be really unforgettable, and the window of time in which a woman is brave enough to take this risk without fully processing the consequences is NARROW.

My window lasted from the end of high school to about halfway through college — so, your typical late teens malarkey. (I mean, I think it's typical, anyway. Some of my friends are still at it in their mid-twenties, making frenzied trips to bar bathroom stalls.) In high school at least, my public-sex having was more out of necessity than anything else, since my geographical sexytime options were very much limited to wherever the dude's car was parked. Sometimes this was in the senior parking lot; at night, we got brave and ventured outside to a remote section of a public park. Once, stuff went down in a Walmart parking lot. It was just a beej, but still. Take that, corporate America!

And then I went to college — a liberal arts college, specifically. And, man, liberal arts colleges! Everyone was trying to find themselves, you know? Myself included. And since a private college wasn't technically a public space, we wound up taking advantage of its many quads, rooftops, dorm shower stalls, and prized campus landmarks over the four years we were there. I mean, it's not like I made a checklist or anything. But my friends and I would high-five over particularly salacious conquests, and celebrate with morning-after muffins at the bakery a few blocks away, because yeah. Buttered that muffin.

I write about this like I write about all things — glibly — but to be serious for a minute here, my interest in having sex in public was a real part of my sexual personality for awhile. "I'm into the public thing," I told some poor guy who was totally not into the idea of having sex with me behind the oldest building on campus. I read relevant erotica online. I made a habit of sexting my long-distance flame when I knew he was in public. I liked the way public sex was a little anxiety-inducing, a little fraught.

And it was nerve-wracking for good reason, because lots of times, I did almost get caught. I had to duck behind a playground during a romp in the park; a car drove slowly by at a less-than-modest moment in the high school lot. I felt nauseous, then I felt giddy. You know how in He's Just Not That Into You (the movie, not the book, if it makes you judge me any less), there's that speech about how, sometimes, we like to make trouble for ourselves — say, by waiting until the last minute to pay the phone bill, just because we love the exhilaration of clawing our way up from the ledge of a bad situation? It was that, but on steroids.

Obviously, living like that and having a sex life like that isn't sustainable. So, how did I get over it... or, am I over it? Well, I aged a few years, and was forced to leave the occasionally hedonistic world of undergraduate academia and its blissfully unthreatening campus cops. I moved to New York, where I'm too scared to touch the subway pole with my bare hands, let alone consider doing the deed in Central Park. (Once upon a December, I had fantasies about getting it on in a dark alley with a handsome stranger, but that fantasy presupposed that I would be single in a city that actually had alleys. New York, FYI, is alley-less.) I settled down in an apartment located directly across from a public school. Things started coming together, I got a little more stable, and now, for whatever reason, I don't crave it anymore.

But maybe I'm not all the way grown up yet. If I were, I think I'd be telling you that public sex is the worst idea of all time. I'd point out that there are a million great reasons not to do it, and only one real reason to do it ("Because it's fun").

I wouldn't be thinking back right now to the night of high school graduation, which I spent with a dude I'm still Facebook friends with, lying down on a blanket in the middle of some random patch of lawn in suburban New Jersey with wet grass sticking to my legs and the sun starting to rise. It was public sex, technically, but it was also an incredibly private moment. It was wild, but it made me feel a little braver, like a little section of the world was under my control. And I had great sex that night — really great sex. I might not do it again today, but I sure don't regret having done it then.