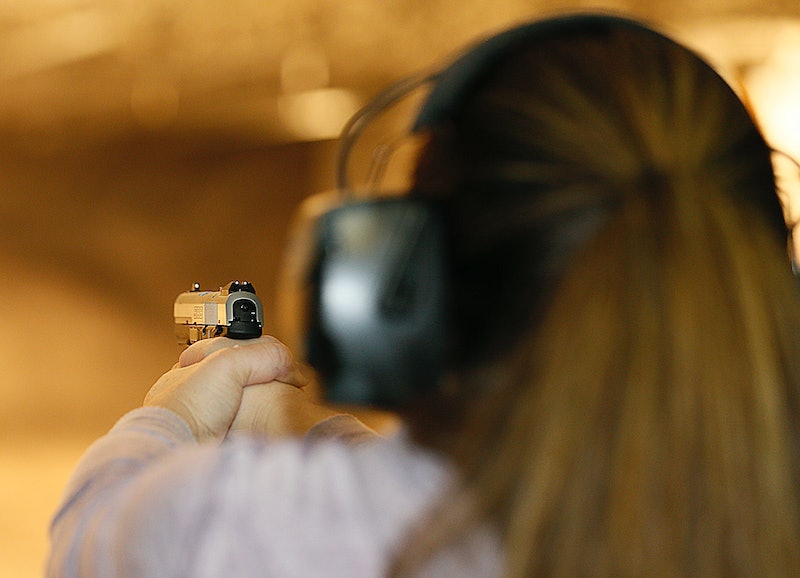 Women often get touted as bigger supporters of gun control in the United States than men. But it's not often mentioned that the number of women who own guns has also been rising rapidly over the past decade. Between 2005 and 2011, the percentage of American women who own a gun nearly doubled, rising from 13 to 23 percent, according to Gallup poll data.

Along with this rise in female firearm ownership comes a growing number of women visiting target shooting ranges and taking classes on firearm safety and self-defense, USA Today reports. An organization called The Well Armed Woman caters to this growing demographic, with nationwide chapters offering resources for women gun owners, like shooting and safety classes. "It is a non-political group," Holly Young, founder of a Florida chapter, told USA Today.

"We make sure that we stress that it's all about safety. We have a motto: equip, empower and educate women on firearms."

But the data on whether guns make women safer is iffy, says a group called Moms Demand Action for Gun Sense in America (an organization with more than three times the membership of The Well Armed Woman). Studies show two-thirds of female gun owners do buy their weapons for safety reasons. But females who live in a home with a gun are nearly three times as likely to be murdered than those without guns in the home.

But, does that mean that guns make women less safe? One would imagine more women purchasing guns may already have more reason to feel unsafe than those who don't, and these things — high-crime neighborhoods, abusive partners, involvement in risky activities or careers — could also contribute to higher murder rates.

I talked to a few female gun owners today about their reasons for purchasing guns and their experience with learning to use them. Nat*, a 67-year-old woman, lives in a small town in Indiana. She said that, growing up on a farm, she was raised around guns, and her husband was a cop who always kept one gun on the top of the closet shelf.

"He worked nights, so it was more or less for my protection," she says. When he died a year ago, she inherited the gun, but she doesn't really feel safer because of it. "It's pretty safe already where I live."

Stephanie has owned a gun for about five years. "Being in law enforcement, I think I have a skewed perception of the probability of becoming a crime victim," says Stephanie, who lives in Dayton, Ohio. When her ex-boyfriend left the gun with her after a break-up, she decided to keep it for self-defense. She keeps it at her home, which she says does make her feel safer.

"But only because I know how to use it. Maybe more importantly, I'm not afraid to use it," she adds. "I didn't grow up around guns, but I work around people with guns, so I got pretty comfortable with them pretty quick. And I practiced — a lot. I've spent a lot of time at the range trying to get better and get comfortable with it."

Alex*, a 31-year-old living in Cleveland, Ohio, owns two guns, gifts from her father "who had dramatic fears of the system eventually failing and chaos taking over America." He used to take her to the shooting range as a teen and young adult, and he taught her about gun safety.

She stores one at home, locked up, and the one she's less comfortable with stored elsewhere. "It really is simply doomsday insurance," she says. "I have no plans to apply for a concealed carry permit and would feel less safe having my handgun actually on my person."

"I do share a fraction of my dad's distrust of an over-reaching government, and i feel better knowing I have it in case future laws ever really ban guns, or if disaster leads to looting and riots or, for god's sake, if there's a food shortage and I have to shoot geese," she says. "Desperate times are not the right times to search for a weapon."

More like this
Women Around The World Are Cutting Their Hair In Solidarity With Mahsa Amini
By Darshita Goyal
How To Politely Reject Someone Who Keeps Asking You Out
By Laken Howard and Lexi Inks
Romance Authors Are Mobilizing For Reproductive Rights
By Natalia Perez-Gonzalez
Black History Month UK’s 2022 Theme Calls For Action, Not Words
By Maxine Harrison
Get Even More From Bustle — Sign Up For The Newsletter