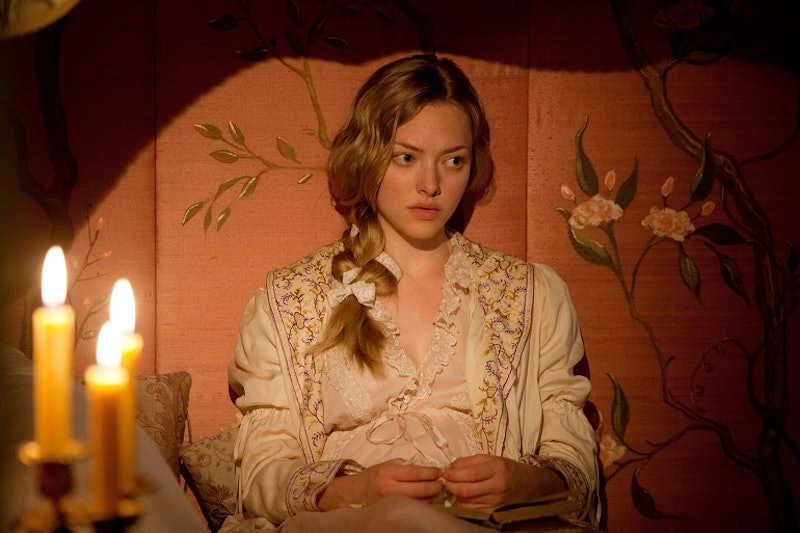 I was never a soprano by choice. You don't choose the soprano life—it chooses you. I remember very clearly the first week of choir in the seventh grade, when we were all pulled into our choral teacher's office for range-testing and approached her with the nervousness of first year Hogwarts students under the scrutiny of the Sorting Hat. I had already suspected from the incredibly irritating way I had to sing most Backstreet Boys songs up two octaves, but it was then that it was confirmed forever: I was, in fact, a soprano.

What I didn't understand is that once you discover you're a soprano, you're a soprano for life. It's like being on the island on Lost—there's no way off. During my junior year of high school, I tried to jump ship after many years of intense choral nerdery (we legitimately would wake up at 5AM to take an 8th period extra chorus class because the first one wasn't enough), but when I picked up an alto auditioning piece, my fellow sopranos quickly forbade it. And just in case I needed any more convincing, the altos basically did everything just short of hiss at me. (I am making this sound more dramatic than it was, but I was 16 at the time, so bear with me. It felt really intense at the time.)

Don't get me wrong: Most of the time, I love being a soprano. I love that flying feeling you get when you gut blast a ridiculous high note, love the crazy competition, and worship the sopranos of Broadway who manage to sing flawlessly every freaking night. But every now and then, even the most enthused sopranos can't help but get a little bit tired of these struggles we deal with all our lives:

Good sopranos pride themselves on their ability to blend with a choir, somehow managing to balance the intensity of the high notes by scaling back the volume, even though it's like the emotional equivalent of trying to stop a volcano from exploding with your bare hands. But no matter how quiet you are, that mic will pick you up the loudest, and you will sit in excruciating embarrassment when everyone plays it back post-performance.

You can never find a place to practice

"Is it okay if I deafen everyone in a five-mile radius from here, or would it be better if I stood another few feet to the left?"

#NotAllMaleChoralDirectors, I know, but the ones who do seem genuinely confused when the whole soprano section falls apart after they hand out music where the notes have basically jumped so high off the measures that they look like raised eyebrows that say "bitch, please."

Altos are always putting you in your place

We get it. Our parts our easier to learn, you do the real heavy lifting, we are stupid, etc. We done here?

But we really want to sing the harmonies sometimes

Easy as it is to learn the melodies, we know from the few times we've been given harmonies that there is nothing in the world more satisfying than being the unexpected note that locks in a chord. But alas, we are still stuck out here, drifting alone, way up in Soprano Land.

There are so many freaking sopranos

I don't know why people assume we think that we're ~super special snowflakes~ for being able to sing super high, because the truth is the competition is fierce. I cannot think of a single choral audition I ever attended where the sopranos didn't outnumber the altos by a shocking margin.

You are considered the most #basic voice part

Maybe it's because there are so many of us, or because for some reason soprano characters in musicals tend to be more feminine and girly, but this has become our lot in life.

The altos get all the meatier parts and awesome power ballads

Approximately all of the times you were ripped to shreds by an emotional musical theater song, it was an alto singing it. Which is kind of ridiculous and brings me to my next point...

There is basically no room for sopranos in modern musical theater

These days it seems like you either belt your face off or go home. There is an extreme deficiency in good modern roles for sopranos and the 99.99% of women who auditioned to be Glinda in Wicked and didn't get the part are not happy campers about it.

SHE LOVED A BOY AND SO SHE MARRIED HIM. WE ALL LOVE EPONINE BUT COSETTE DID LITERALLY NOTHING WRONG AFTER BEING ABUSED FOR MANY YEARS AND NOT HAVING ANY PARENTS AND THE SOPRANOS WILL PROTECT HER AT ALL COSTS.

Looking at you, tenor section.

You have a mild addiction to Ricola

OK, severe addiction. The other day someone casually mentioned they were on sale at CVS and it was basically like he'd told me I won a free car.

The neighbors think you're being murdered whenever you practice

"It's all good, just trying to sing Phantom of the Opera again, plz forgive."

I think the more accurate term is "weep." The other day I was singing and one of our Shih Tzus literally put his paws on his head and wept.

Even you get sick of the sound of your own voice

You want us to feel bad for you? We're the ones who have to listen to this literally every time it happens. CUT US SOME HIGH-PITCHED SLACK.