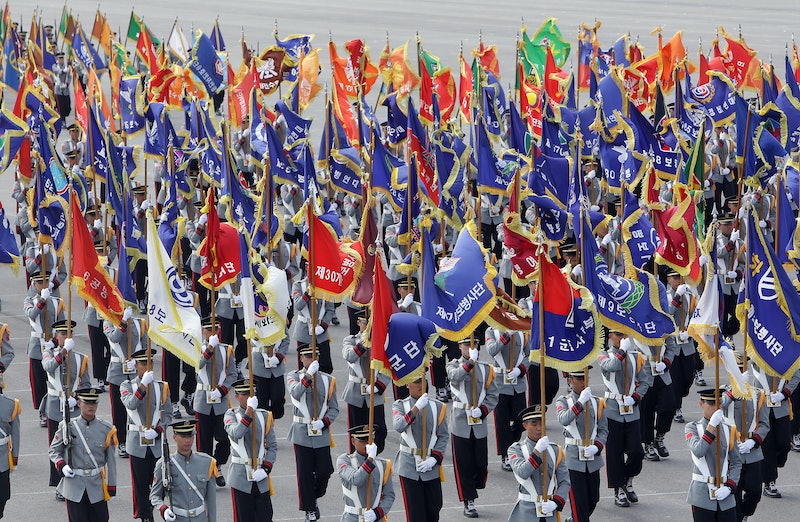 South Korea won't take any signs of aggression by North Korea lying down, and they had a full parade of their weapons arsenal to prove it Tuesday. South Korea celebrated the 65th anniversary of its military by staging a huge parade complete with a vast display of its weaponry, including ballistic and cruise missiles. The long-range weapons were trotted out along with about 11,000 troops and 120 aircraft among other military equipment to show a full array of the South's might.

It was the largest display of military force in the country in more than 10 years.

Speaking at the event, South Korea's President Park Geun-hye said, ""The situation on the Korean peninsula... is very grave." Talking specifically about their adversaries to the north Geun-hye said, "We have to build strong deterrence against North Korea until the North abandons its nuclear program and makes the right choice for the people of North Korea and peace on the Korean Peninsula."

South and North Korea are still technically at war — a truce at the end of the Korean War just halted the continuing assaults.

New missiles were unveiled in South Korea after the North conducted its third nuclear test.

The somewhat eased tensions between the two countries have increased in recent weeks, after satellite images showed what appears to be a nuclear reactor in North Korea returning to functionality, inflaming continuing concerns about the country's proliferation of nuclear weapons.

U.S. Defense Secretary Chuck Hagel was in attendance at Tuesday's military parade, and said that there were no plans to draw down on the more than 28,000 troops currently helping to guard the border between North and South Korea. While South Korea's desire to remain in good standing with the international community prevents them from developing nuclear weapons, the country did recently gain approval to extend the range of its missiles in order to more successfully combat the threat from North Korea.

Overall, South Korea is much more wealthier than its northern neighbor and has much more sophisticated weaponry. But even a more advanced arsenal would have difficulty combating a country willing to use the threat of nuclear weapons.