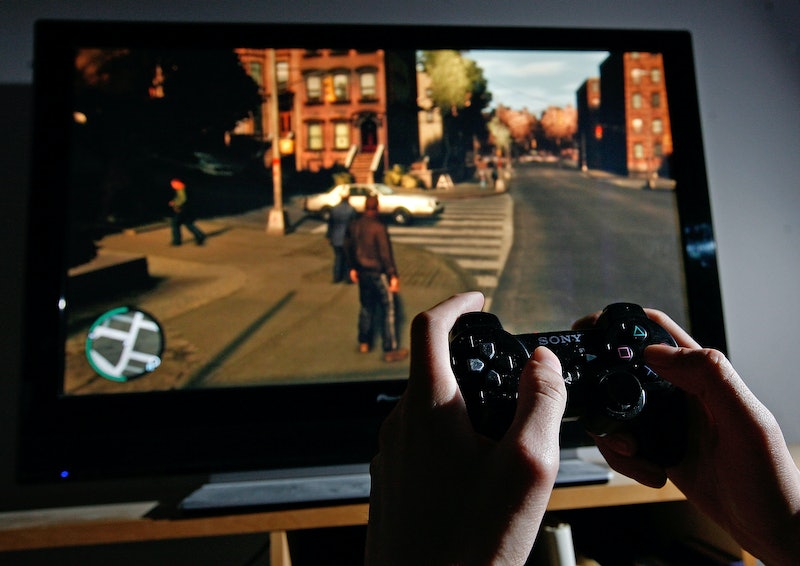 First thing Tuesday morning, two important things happened to the internet: the online healthcare exchange integral to the Affordable Care Act went live, and so did the multiplayer version of Grand Theft Auto V. The two might have more in common than you would think: Both programs boast a solid fan base, and have more than their share of detractors. Obamacare's critics claim that he's promoting socialism, whereas GTA's say the game glorifies torture, desensitizes its users to violence, and promotes poor female stereotypes. And on Tuesday, so many people logged onto both that each site became buggy, slowed dramatically, and spat out error messages.

The critically acclaimed, fifth-generation edition of one of the world's most popular video games has sold roughly 15 million copies since its launch Sept. 17. Grand Theft Auto Online is an extension of the original game: users must have already bought GTA V to enter the multiplayer portal, where they can play for and against friends and strangers, join gangs, partake in death matches, and practice their heist skills, amongst other fun things.

A blog post by parent company Rockstar warned that an overload of users would compromise even the best-supported server, and developers often can't anticipate what those millions of users will do — log in and out repeatedly if things aren't smooth, try to access hidden "Easter eggs" inside the game — leading to buggy connections. Already, an update page has seen dozens of complaints from users, who have noted that they're losing data, can't get online, or can't use tools inside the game. Rockstar is perfectly calm, promising that they're doing all that they can and that users will hopefully see their problems fixed by noon. Some people, however, are crying "conspiracy:"

Poor Obama was up late into the night Monday night trying to deal with this whole government shutdown thing, so we wouldn't blame him for kicking back a little this morning and playing a bit of GTA V. Well, okay, maybe we would.

At midnight, when the government officially shut itself down (or, at least, shut down the agencies and operations it deemed "not necessary") the online healthcare marketplace opened — the place where, at least theoretically, those without insurance can "shop" through insurance providers that have been vetted by the administration.

Since the "marketplace" is aimed at those who don't have insurance, it's a positive sign for the healthcare reform that the site faced an influx of visitors first thing Tuesday morning. Users could enroll for healthcare using the site from 7 a.m. this morning, and wannabe consumers were met with error messages just ten minutes later. The Department of Health and Human Services responded in a statement: "Consumers who need help can also contact the (federal) call center, use the live chat function or go to localhelp.healthcare.gov to find an in-person assister in their community."

Twitchy logged dozens of Tweets and screenshots from irritated users, who were met with error messages — "The system is down at the moment." — and a system that didn't recognize login details and refused to progress with their application. More conspiracy theories abounded:

A televised address from the White House Monday saw Obama state resolutely in the face of strong GOP resistance to his beloved healthcare reform: "The Affordable Care Act is moving forward. That funding is already in place. You can't shut it down." At least 7 million Americans are expected to sign up for the plan, with 8 million more low-income Americans receiving benefits through Medicaid.

So, maybe wait until tomorrow to sign up for health insurance coverage, and/or join millions of strangers in simulated gang robberies. We ain't judging.