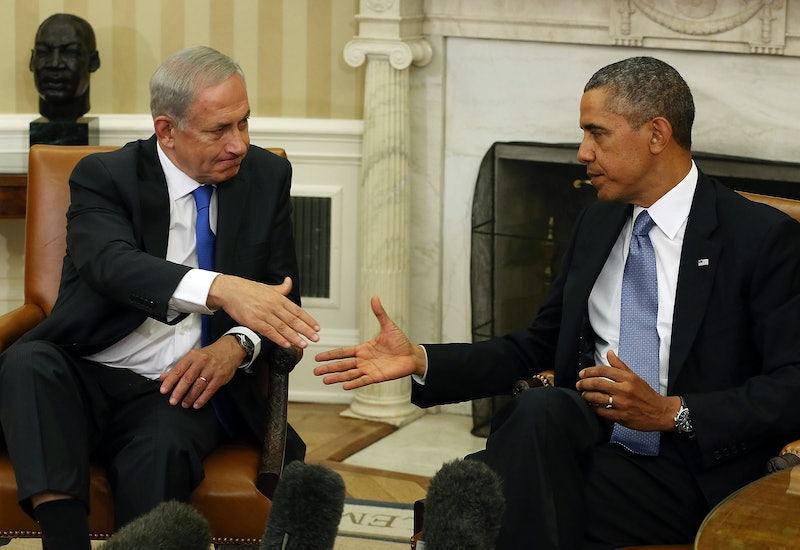 Iran is not taking kindly to statements made by Israel's Prime Minister Benjamin Netanyahu during his meeting with President Obama yesterday. According to Iran's Foreign Minister Mohammad Javad Zarif, Netanyahu's assertion that Iran's nuclear program largely exists to threaten Israel — and that the country's recent willingness to discuss compromising on its nuclear program is a "charm offensive" — are blatant lies.

"We have seen nothing from Netanyahu but lies and actions to deceive and scare, and international public opinion will not let these lies go unanswered," Zarif said on Tuesday in rebuttal to Israel's claims that Iran's conciliatory attempts were not genuine. "For 22 years, the Zionist regime has been lying by repeating endlessly that Iran will have the atomic bomb in six months," he said. "After all these years, the world must understand the reality of these lies and not allow them to be repeated."

Iranian foreign ministry spokeswoman Marzieh Afkham also spoke out about the claims made by Israeli leadership during their meeting at the White House, saying Netanyahu was spouting lies to deter what has otherwise been a successful attempt to reconnect with the West.

President Obama's meeting with Netanyahu Monday came on the heels of the highly-anticipated efforts to reestablish a diplomatic relationship between Iran and the United States this month. While the presidents of Iran and the U.S. did not meet, they did have a phone conversation and high ranking Iranian officials met with Secretary of State John Kerry for a conversation that both sides called "constructive."

But during his meeting with Obama yesterday, Netanyahu took the opportunity to reiterate the danger of Iran's nuclear program saying, "The bottom line is that Iran fully dismantles its military nuclear program."

Though they are neighboring countries, Iran and Israel have long viewed each other as enemies. Iran does not recognize the Jewish state and supports anti-Israeli militant groups, while Israel has threatened to strike Iran's nuclear facilities, which it claims were created with Israel's destruction in mind.