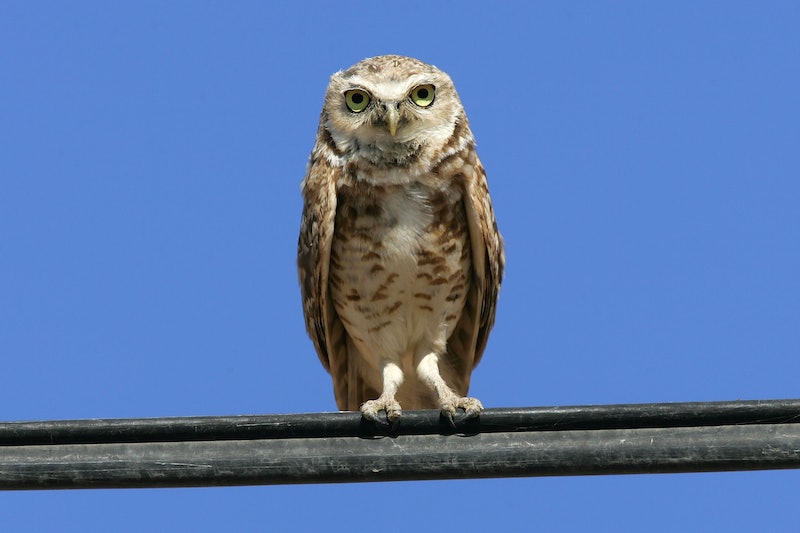 If you consider yourself a night owl, you'll know that science (and probably life) has been coming down hard on you lately. Though researchers initially believed that those who naturally stay up late and love to sleep late were smarter and more successful than their "lark" counterparts (otherwise known as dreaded morning people) there's recently been a bit of a turnaround. Now, science thinks that if you're a night owl, you're also more likely to be evil, narcissistic, and a psychopath — and if that wasn't quite dark enough — depressed.

A brand-new German study out Tuesday discovered a palpable difference between the brain matter of night owls, larks, and those in between: night owls had less dense "white matter" in the areas of their brains associated with depression. It's hard to say whether this was caused by depression, or permanent jet-lag (which night owls are thought to suffer from). In other words, the questions is, are night owls more genetically likely to suffer from depression, or is the fact that the world is run by morning people making them more likely to be depressed? (Fun fact: Barack Obama is a "night owl," whereas Michelle is an early riser, apparently getting up at 5:30 every morning.)

Though the field of sleep science is still fairly young, studies have strongly suggested that we're genetically hard-wired to sleep the way we do. Larks find it nearly impossible to sleep late, and suffer on the weekend because social life dictates that they often have to stay out late, and don't sleep enough hours before it's time to rise again. Owls, on the other hand, typically can't fall asleep for at least a couple of hours after their lark counterparts in the evening, and then find it difficult to get up in the early morning for day shifts at work.

Early research has suggested that a quarter of people are genetic night owls, while 15 percent are larks — everyone else tends to be somewhere in between, with traits of both or neither. Complicating things, your age influences your sleep patterns: toddlers are larks by nature, waking up early and clamoring to eat Cheerios immediately, wheres teenagers are generally night owls and sleep as late as they possible can.

Perhaps because more people identify as owls, there's been more emphasis of late on their typical characteristics. Earlier this year, researchers in both Australia and the United Kingdom found that owls tend to score higher on what's referred to in psychology as the "Dark Triad" traits: narcissistic tendencies, psychopathy, and Machiavelli-ism. They speculated that those so-called "evil" people evolved into night owls so they could stay up at night and commit crimes.

In Denmark, there's even an organization called the "B-Society" (a B-person is what they call an owl, whereas a lark is an A-person) which campaigns for flexible school and working hours for night owls. "The B-Society is working towards making a flexible society," it writes on its website, "which can accommodate different types of families, ways of working and circadian rhythms." Their Facebook photo poses the question:

When Obama gets over this whole "government shutdown" malarkey, he really should turn his hand to that one.

More like this
14 Scary Campfire Stories To Tell Your Friends
By Charlotte Ahlin and Kaitlyn Wylde
26 Ghost Story Podcasts To Get You Ready For Halloween
By Jessica Booth, Mia Mercado, JR Thorpe and Emma Carey
15 Easy Pranks To Play This Halloween
By Emily Kelley and Lauren Grant
This Psychological Effect Might Be Keeping You From Hitting Your Goals
By Lexi Inks
Get Even More From Bustle — Sign Up For The Newsletter