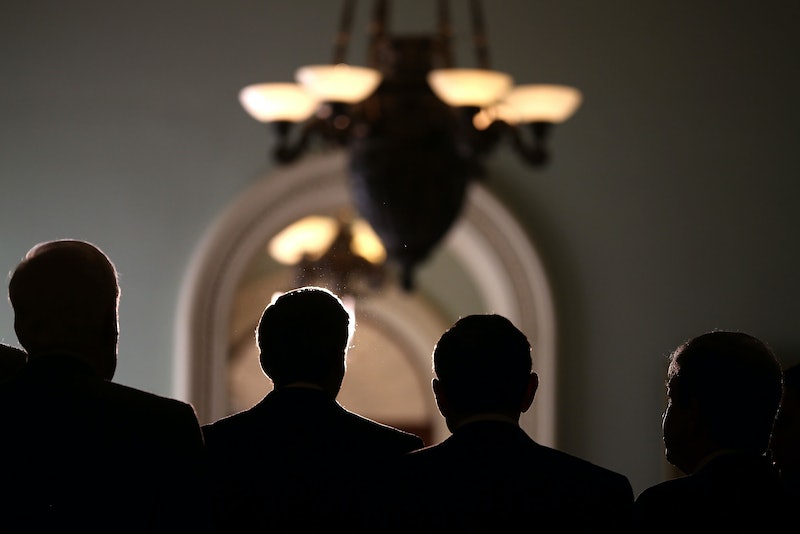 By now, you'll probably have heard that Grand Theft Auto Online launched Tuesday. Oh, and the government shuttered itself closed, so that happened too.

In a speech at the White House Tuesday afternoon, Obama placed the blame squarely on the Republican-led House and the powerful GOP sector that prevented a viable funding bill from reaching the Democrat-Senate, calling the incident a "Republican shutdown." "This Republican shutdown did not have to happen. But I want every American to understand why it did happen," the president told press in the Rose Garden. "They've shut down the government over an ideological crusade to deny affordable health insurance to millions of Americans."

But Obama isn't just angry — he's deeply worried. Though polls indicate that the public blames the Republican side for the shutdown, and doesn't believe that opposition to Obamacare had to go this far, Obama isn't just the Democratic leader: he's also the country's leader, and of all its lawmakers. If this situation spirals dangerously out of control, and the debt ceiling isn't raised by its Oct. 17 deadline, and American winds up deeply entrenched in yet another financial crisis, then the blame will ultimately rest on him. Economically, the country can't afford the long-term, billion-dollar consequences of a shutdown and a lack of focus on the "debt ceiling" issue. But, to Obama, politically, ethically, and fundamentally, he can't afford to give up the Affordable Care Act.

Something's gotta give. But what?

At present, this looks most likely. Only a third of the Republican Party are actually in favor of shutting down the government to get their way over Obamacare, and thrusting the party in this kind of negative spotlight has angered many Republicans. Ted Cruz (R-Tex.) is spearheading a lot of the drama — remember Green Eggs And Ham, guys? — and a lot of the Party isn't in favor of his methods. "We have tried robustly on the spending bill, and it hasn't borne fruit," said Rep. Doug Lamborn (R.-Colo.). "For this week, we may have to give up."

Last time there was a shutdown, in 1995-6, president and Democrat Bill Clinton fundamentally disagreed with the funding bill offered him by the Republican-controlled Congress, and Republicans wound up taking the blame for the $2 billion financial price of the 28-day shutdown. Though the Right continues to bash the conventional wisdom that the GOP took a serious hit to its reputation in the years following the incident, it's generally accepted that the party nearly lost control of the House because of it, and Bill Clinton's re-election was later bolstered by the Republican bad press.

No one in the Party wants this to happen again: the GOP is having enough of an "identity crisis" of late without being portrayed as petulant and blackmailing. Obama has re-iterated his position over and over again: he won't allow a bill that defunds Obamacare, and much of his healthcare reform has already been funded anyway — like the online exchange service, which opened today to millions of visitors. If the cracks already present within the GOP further split the Party, the fallout could see them revise their conditions and seek a negotiation that allows for the healthcare reform.

To end the shutdown, a bill would have to be approved by the House — at present, it's the House's turn to re-negotiate and re-submit a budget plan — and then approved by the Senate, and then signed into law by the president.

Yes, the shutdown is bad. But what's much, much worse is what will happen if the government flat-out can't pay its debts, and doesn't allow for any money to come trickling in by raising the debt ceiling. The original plan to do so would have gone ahead relatively smoothly if it hadn't been for the Obamacare debacle, but with both factions unwilling to compromise, the shadow of what will happen if America ends up defaulting on its debts looms heavy. It's utterly unprecedented, but we know that if it does happen, the socioeconomic climate will get very bad, very quickly. (For a look at Day 1 in post-default "X Date," courtesy of The Atlantic, see here.)

Democrats have predicted that if the government remains shuttered, the focus of the debate will abruptly shift from Obamacare to the debt ceiling. A reform of the healthcare system may be necessary or not, depending on your politics, but it doesn't compare to the short-term threat of not paying America's bills on time. Both the GOP and Obama know this, and so the debt ceiling might be the government's best shot at re-opening before the nation's Oct. 17 deadline. The political tug-of-war, both sides know, could abruptly evolve into economic destitution.

America will disintegrate at great speed.

According to the GOP narrative of Obamacare taking hold, not to mention the graphic advertisements supporting their predictions, we'll be soon swallowed by Communist fires. Or Uncle Sam will replace our gynecologist. The nation will descend into anarchy.

Or, America won't be able to pay its debts, which will trickle down to Wall Street and could prompt a global financial crisis, not to mention cutting off government subsidies and federal paychecks nationwide.

At the very least, it's a safe bet to say that if things continue as they are, America's veterans won't get their benefits paychecks in a week or two. (The House is apparently about to pass legislation to ensure that the Department of Veterans' Affairs, as well as national parks, will remain open.)

But on the bright side, it's now legal to get high, right?

Seriously. Can someone just put an end to all of this already?

Until then, we'll be watching this.