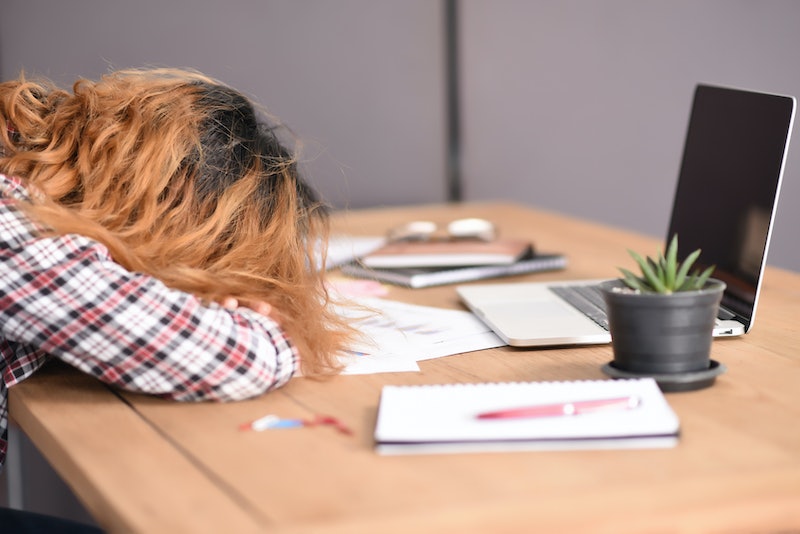 In college I was queen of the all nighters. I would sneak into my housemate’s room (sorry, Sarah), line up my Yerba Mate (#liberalartsschool) and attempt to whip out an eloquent five page paper by 8 a.m. I knew that this practice probably wasn’t great for me, but it meant that I had enough time to finish my work and hang out with my friends. After reading Steven Holbrook’s recent article on the science of all-nighters, I’m starting to think that I might have been better off sleeping. Here are some of the harmful effects of all night study session.

Higher tendencies to makes mistakes and delayed rations are shot term side effects of lack of sleep, neither of which is helpful when taking an exam. This might be why those who pull all-nighters have comparatively lower grades than students with normal sleeping habits. A study at St. Lawrence University found that “students who have never pulled an all-nighter have average GPAs of 3.2, compared to 2.95 for those who have.” Reasons for this are cited as students having difficulty remembering what they studied at 5 a.m., and not thinking clearly at the time either.

According to Holbrook, “pulling an all-nighter actually makes your memory less functional. This is because sleep allows your brain time to repair and refresh itself. Your mind's effectiveness, including your attention span, information recall and reasoning skills, is significantly decreased when deprived of sleep.” Sleep deprivation is even linked to memory loss and brain degradation in older adults. Yikes!

All nighters mean cramming for exams, which isn’t a very effective study method. Psychologists at UC San Diego found that “students perform better when they space their study sessions rather than when they try to cram everything into their noggins during one sitting.” Holbrook proposes that this is likely because “studies have shown that we tend to remember the first and last things we hear in a given time period, while the information in the middle gets sort of hazy if it's remembered at all.”

According to U.S. News, the effects of “too little sleep” include high blood pressure, obesity, diabetes, and depression. Even more alarming is Holbrook’s statement that “according to the Associated Professional Sleep Societies, healthy adults that get fewer than six hours of sleep per night are four times more likely to suffer a stroke than their well-rested counterparts.

Now get some sleep!

More like this
This Psychological Effect Might Be Keeping You From Hitting Your Goals
By Lexi Inks
19 Latinx Therapists & Mental Health Experts To Follow On Instagram
By Kaitlyn Wylde, Naydeline Mejia and Lexi Inks
Here’s Your Daily Horoscope For September 28, 2022
By Mecca Woods
Here's Everything You Need To Know About Shuffling Your Tarot Deck
By Brittany Beringer
Get Even More From Bustle — Sign Up For The Newsletter