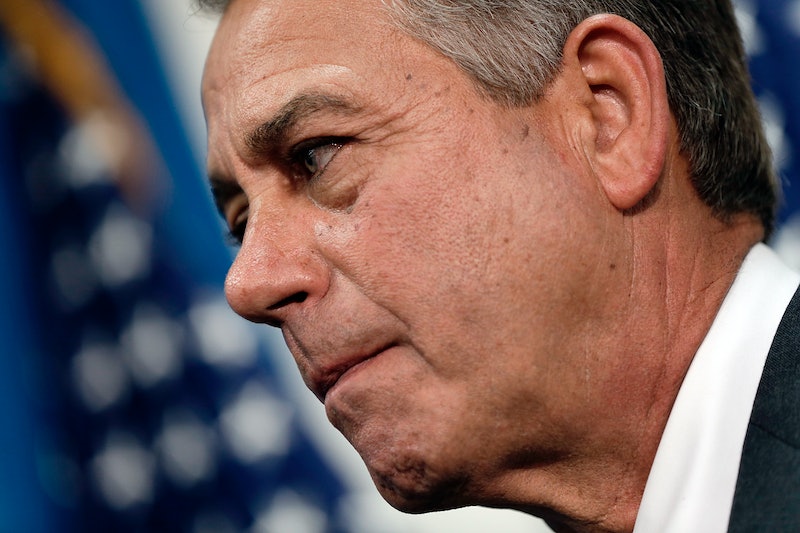 Today was a big day. It marked the beginning of the Affordable Care Act's Open Enrollment Period — a day of celebration for anyone who believes that healthcare is a right, not a privilege, and a day of nasty editorials for those who believe otherwise.

It's also the day that Congress stood still. Rather than fulfill their obligation to ensure that the federal government, its agencies, and its employees continue to receive funding (and thus, you know, run), Congress appears to be filled with people who won't speak to each other, won't look at each other, and certainly won't place the interests of regular people (like those employed by the National Parks, NASA, TSA, and the Census Bureau) above their own ideological war over the aforementioned ACA.

So, Congress, this list is for you. It's a mere smattering of the ways in which you could've avoided the undeniable mess that is today.

1. Democrats & Republicans: Let's All At Least Try To Get Along

Honestly, where have the days of cigars, whiskey, and smoke-filled back-room decisions gone? I know they existed, I watch TV, I've read about Reagan's presidency. If Democrats and Republicans could be slightly less hell-bent on hating each others guts and a bit more willing to play nice, act civil, and consider compromises, we might not be quite as embarrassing as a nation. Seriously. Go catch a movie with someone across the aisle. Fight about a dinner reservation rather than healthcare policy. See each other as people rather than evil archetypes. It would do the public good.

Where have all of you gone? I know you're there, we keep hearing rumors, and there are those occasional sightings near the Washington Monument (now closed, thanks for that). Speak up! Tell Boehner to get his head out of his butt! Tell the Tea Party and Michelle Bachman to keep their mouths shut for 10 minutes while you actually create some worthwhile policy! You're letting your party slide into a terrifyingly hilarious caucophony of crazy and crazier. It's your responsibility to fix it: Democrats sure aren't gonna.

3. House Democrats: Stand Up For Yourselves

Nancy Pelosi can't do it on her own. We need to stop being the party of the well mannered and soft spoken and start being the party that backs up their leader. If Nancy can call Republicans out on acting like the proverbial ostrich with their heads stuck in the sand, so can you!

Seriously. We get it! You think that you're right. That's nice. At the end of the day, the ACA has funding and NOTHING ELSE DOES because you won't pass the budget. There's a time to get on your high horses about moral right and wrong (which, by the way, you're standing on the wrong side of) and there's a time to do your jobs as lawmakers. Now would be the latter scenario. Letting politics interfere with governance is exactly why the rest of the world makes fun of us behind our backs. You're giving them free material. Stop it. You're sacrificing the good of the many for your own personal battle, and it's not a good look for you.

5. Senate Democrats: It's Time To Put The Good Of The Whole Over The Stupidity Of The Few

I know that you don't want to talk to the House. Who would? But the fact of the matter is, we need a government. We need one that can pay its employees and provide for its veterans. And, if we want the ACA to be successful, we also need the support of states with Republican governors, Republican Congresspeople, and overwhelming numbers of Republican voters. We can't just ignore Texas (#1 as far number as the number of uninsured goes) and Kentucky (1 in 6 without health insurance). Not only do red states have overwhelmingly higher numbers of uninsured individuals, they also have higher numbers of individuals with conditions like obesity, heart disease, and diabetes. They need the ACA, and we need them to help implement it for it to work. So suck it up, and get in the conference room. Please.

You singlehandedly blocked almost 175 House Republicans from voting to approve the budget. What is wrong with you? We get it: you don't want to lose the Speakership. You're terrified that if you bring up a vote on something so liberal as *gasp* keeping the federal government up and running the Tea Partiers will desert you and replace you. And then you'd lose your gavel, and the gavel is pretty cool.

Here's the thing, Mr. Speaker: you're going to get remembered either way. And right now, you're being remembered as the guy who let petty personal concerns get in the way of his ability to lead. Don't be that guy. Be the guy who understood that safeguarding the paychecks of federal employees and the aims of federal agencies was more important. Be the guy who realized that there is no way of stopping the boulder that is Obamacare from rolling down the hill. Be the guy who understood that the practical concern of day-to-day governance (Republicans are the "practical" party after all, not like us pie-in-the-sky liberal whiners) trumps a fight that can't possibly be won.