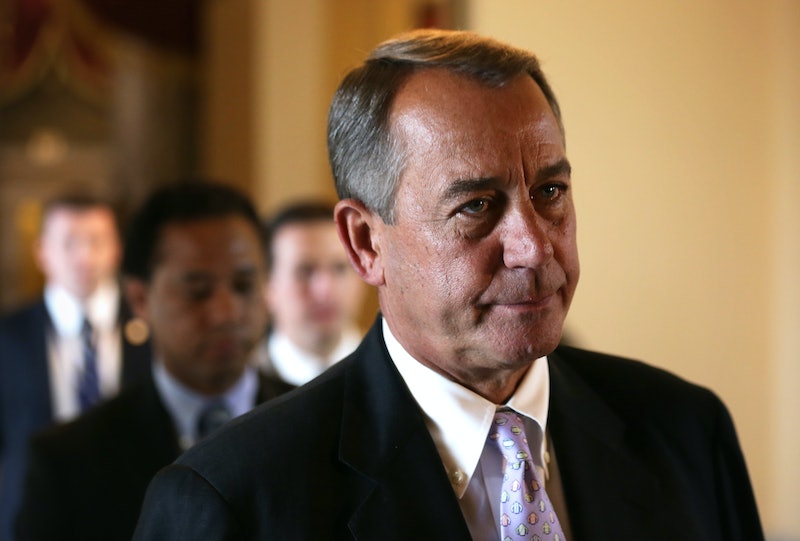 If you were thinking that House Republicans might come to their senses quickly and end this shutdown after a few days, think again. All signs are pointing to a long, protracted shutdown, and to make matters worse, a consensus is emerging that any deal congressional leaders ultimately reach to re-fund the government will be tied to another, much more dangerous partisan bargaining chip: raising the debt ceiling.

The National Review’s Robert Costa, who’s as tapped into congressional Republicans’ mindset as anyone, reported an unpleasant truth today: Apparently, John Boehner isn’t even considering passing a “clean” continuing resolution (legislation that funds the government without touching ObamaCare or other Democratic priorities). That’s bad, as Senate Democrats have repeatedly pledged that the only CR they’ll pass is a clean CR.

But in the mind of Boehner, “a clean CR has never been an option.” This is because passing one would be seen as a concession to Democrats, and would thus “raise tension within the ranks” of House Republicans. So apparently, Boehner would rather put 80,000 people out of work indefinitely than deal with a room of angry Republican congressman. Gotcha, cool.

Rather, “the leadership is digging in for an extended impasse with Senate Democrats.” But to what end? Costa says that the idea is to “preserve the House GOP’s fragile unity—and maybe, if they’re lucky, win a concession from Senate majority leader Harry Reid.” Well, what if they’re not lucky? What’s the plan then? Is there even a plan, or will this insane moment in congressional history become frozen in time forever?

So that’s the first piece of terrible news. The second is that the longer this goes on, the more likely it is that efforts to re-fund the government will become connected to the impending congressional battle over raising the nation’s debt limit. This is very bad.

Most economists agree that while shutting down the government is bad, refusing to raise the debt ceiling—and thus causing America to default on its debts—is much, much worse. Congressional Republicans threatened to force the country into default in 2011, then caved at the last minute—and even then, the U.S.’s credit rating got downgraded for the first time in history.

The problem is that with every day that elapses between now and the debt ceiling deadline—October 17th—the chances increase that the two issues will have to be resolved together, because neither side will want to pass legislation that re-funds the government if they know they’ll have to jump into another fiscal battle three days later.

In other words, this is far from over, and will likely get worse before it gets better. Gulp.