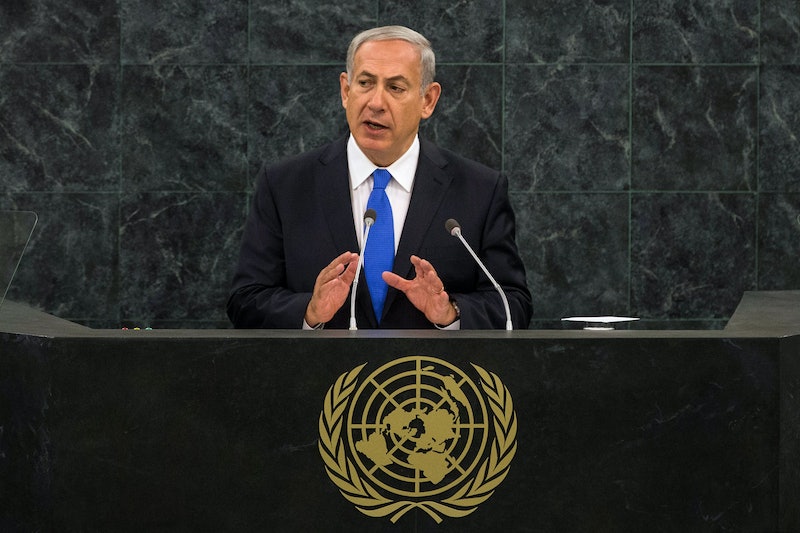 Israel and Iran continued to exchange blows into Wednesday, after a heated start to the week that included personal warnings to President Barack Obama from Israel's Prime Minister, Benjamin Netanyahu. On Tuesday, Netanyahu told the United Nations that Hassan Rouhani — the Iranian President who made news in recent weeks for diplomatic outreach to Obama, Rosh Hashanah greetings, and affirmation that the Holocaust did in fact happen — was a "wolf in sheep's clothing."

Speaking to the General Assembly on Tuesday, Netanyahu did not rule out the possibility of a unilateral strike against Iran. "Israel will not allow Iran to get nuclear weapons," he said. "If Israel is forced to stand alone, Israel will stand alone."

Diplomatic outreach, he warned, was a red herring to get the U.S. to ease up on restrictions that hurt its economy. The minute attention turns away, Netanyahu warned, Iran will step up nuclear programming. "You see, Rouhani thinks he can have his yellowcake and eat it, too," he joked, referring to a nuclear facility known as yellowcake that was completed during an earlier thaw in diplomatic relations.

Member of Knesset Amram Mitzna, on the other hand, dismissed his attacks. The Jerusalem Post reports that Mitzna "told Israel Radio on Wednesday that Netanyahu's declaration that Israel was willing to act alone in stopping Iran from acquiring nuclear weapons was arrogant and has no basis in reality."

At the same time, Iran's parliament moved to back Rouhani's outreach to the West on Wednesday. More than two thirds of the MPs signed on to Rouhani's outreach, showing that Iran's parliament has an easier time agreeing on opening up to the West than the U.S. Congress does on funding the federal government. They signed a statement supporting the image of a "powerful and peace-seeking Iran which seeks talks and interaction for the settlement of regional and international issues."

And then they swiftly moved to take a swipe at Israel. Iran's foreign minister said they wouldn't let "the Zionist lobby" undermine progress.

A strike by Israel could drag the United States into another war in the Middle East. Israel, a long-time U.S. ally, is the recipient of one of the U.S.'s largest military aid packages and often feels under threat from surrounding countries, like Iran, who do not recognize it diplomatically. In September, the country claimed to have arrested an Iranian spy.

The United States responded to the international kerfuffle with a measured approach.

"As the President has said, we understand, and it is entirely justifiable, that Israel is skeptical about Iran and Iran’s intentions. After all, this is a country whose leadership, until recently, was pledging to annihilate Israel," said White House Press Secretary Jay Carney. But he emphasized that for the time being, at least, the U.S. would pursue a diplomatic route. "We’ve said all along that [the diplomatic opening] won’t remain open forever, but this opportunity is here," Carney said.