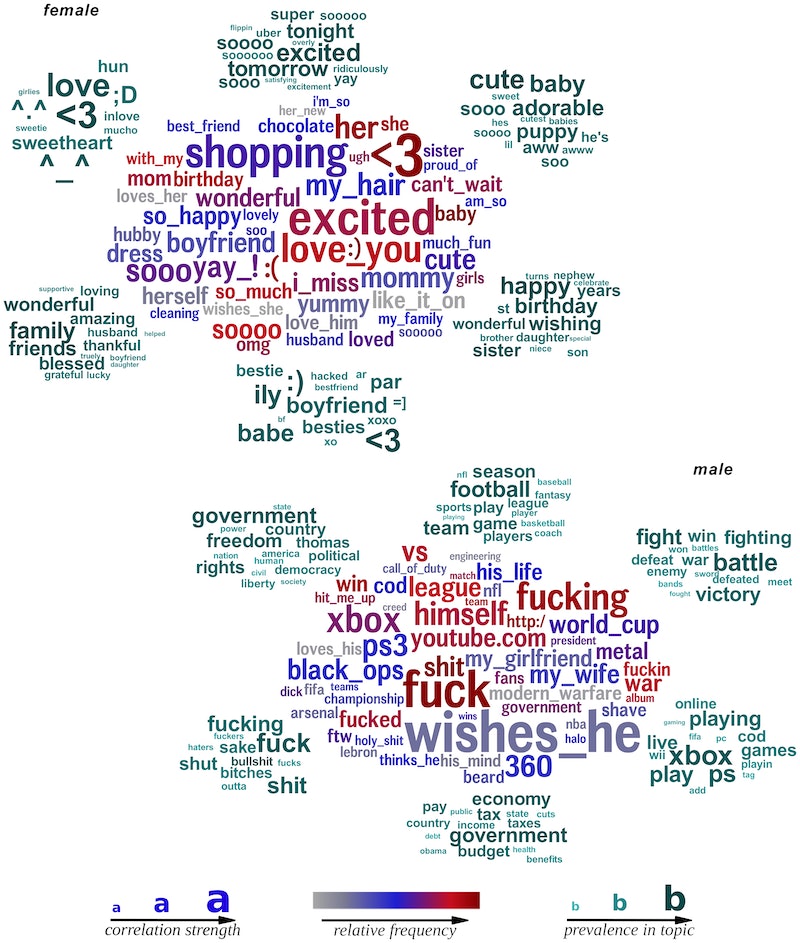 The self-described largest study of language and personality in social media is out, and the results are kind of…not that great as far as gender goes. Turns out the word women seem most fond of on social media sites is “excited” and other favorite words and phrases include “shopping,” “love you,“ “my hair,” “boyfriend,” and, of course both “sooo” (with three o’s) and “soooo” (with four o’s). And “<3.” That one’s suuuuper popular (with four u’s). And what are the top words and phrases for guys? Well: “fuck,” “wishes he,” “fucking,” “xbox,” “league” “vs” and you can guess the rest.

So what is up? Are all the stereotypes true? Are all men and women totally gender-normative? Well, I wouldn’t go that far. I mean, this is the Internet. The place where you present yourself to the world.

What this study really means is that people choose to present themselves in gender normative ways. Which maybe means that it’s who we really are, but as anyone who has ever written a Facebook status making their awful, tear-filled break up seem like the best thing to ever happen to them should know, social media doesn’t really tell the whole truth.

Also, I suppose the dataset of "over 15.4 million Facebook messages collected from 75 thousand volunteers" could be problematic. Does the study consider people with public profiles as "volunteers?" And if the subjects are truly volunteers, then the type of people who volunteer to be studied could present a selection bias. This may not be a representative sample of all social media users.

More like this
Behind The Hilarity Of The "POV: You Walk Into My Room" TikTok Trend
By Lexi Inks
Why TikTok Is Obsessed With Caesar Salads Right Now
By Alexis Morillo
Why TikTok Is Flooded With Controversial Videos About "Pick Me Girls"
By Courtney Young
This TikTok Song About An Unrequited Romance Has FYPs In Shambles
By Emma Carey
Get Even More From Bustle — Sign Up For The Newsletter