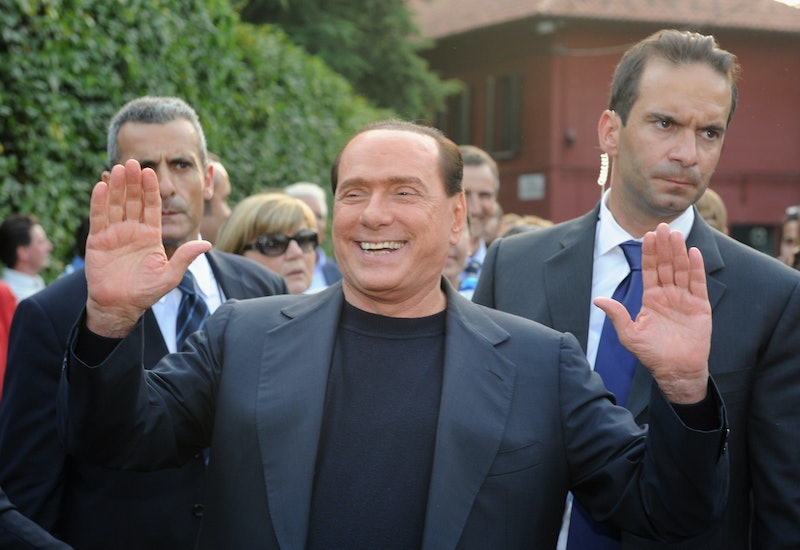 Lesson No. 1 from Silvio Berlusconi, former Italian prime minister and now-senator: If you've just promised to "torpedo" your country's government, deciding suddenly to back it instead kinda undermines your political cred.

A confidence vote for support of Italy's coalition government was called in the Italian Senate this afternoon and passed 235-70. Prime Minister Enrico Letta had said a defeat would prove a "fatal risk" for Italy — a country that, following Berlusconi's scandal-filled resignation in 2011, has seen its share of political and economic turmoil. Berlusconi had previously threatened to withdraw the support of the party he leads as Senator, and get busy toppling that government.

But wait! Just before the vote, Berlusconi took the Senate floor and announced that he'd be backing the government after all: "Just kidding, guys, LOL!" (Not a direct quote, but our estimation of it.) His center-right Freedom People party (good name) would instead vote as a bloc in favor of Letta's coalition.

"Italy needs a government that can carry out structural and institutional reforms which the country needs to modernize," he said. "We have decided, not without internal strife, to vote in confidence."

Minutes later, the vote, pegged to win with a slim majority, passed in a landslide.

Turns out Berlusconi realized his party senators weren't too keen on the plan of rogue anarchy that he announced Sept. 28, which involved demanding resignations from five of his party's ministers from their posts. Because his party represents a major part of the coalition government, the removal of the ministers could crumble it.

One of Berlusconi's party members then announced that 40 others were prepared to back Letta, a death knell for Berlusconi sealed when his "once-super-loyal" lieutenant and deputy prime minister Angelino Alfano, known as Berlusconi's political heir, announced he'd be backing Letta as well.

Lesson No. 2 from Berlusconi: Maybe don't threaten a "toppling" when you're facing an expulsion vote in two days. He's already on shaky ground with fellow senators, a committee of whom are due to vote Friday on whether to kick him out of the Senate following his August tax fraud conviction. Under a 2012 law, anyone sentenced to more than two years in prison cannot hold office.

Letta's victory "leaves Berlusconi greatly weakened, and with the judicial noose tightening around him, his political star now looks to be firmly waning," said Christopher Duggan, a professor of Italian History at the University of Reading.

A defeat for Letta today would have meant an "immediate crisis" for Italy, which is still mired in its longest post-war recession. The government would have been plunged into shutdown (ahem), and a new election would have to be held.

"I think we are seeing the final chapter of Berlusconi's political life," Giacomo Marramao, a politics professor at Roma Tre university, said. "A post-Berlusconi party was born today."