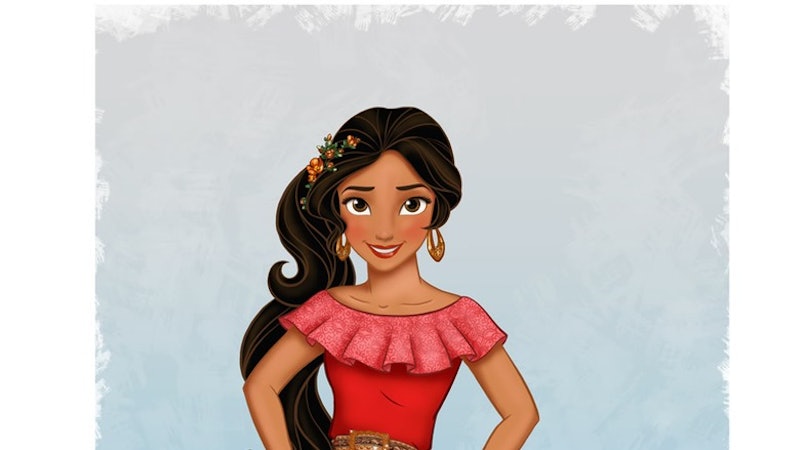 The evolution of the Disney princess has been significant over the last 20 years, but two things have remained consistent: I've loved them all, but not one of them has ever looked like me. Sure, there have been brown-skinned princesses, and sure, they've had dark hair, but there's never been a Latina princess — a true, bonafide Latina princess who trades in her chancletas (slippers) and hair rollers for sparkling heels and a tiara. So when I read the news that Disney finally created a Latina princess, a real hermana (sister) that little Latina girls all over the world could relate to, I was overjoyed.

And then I kept reading.

Yes, Princess Elena of Avalor will be the first Latina princess, but she's not going to have her own movie. Instead, she's going to be part of Sofia the First, an existing Disney cartoon. She has the potential to get her own TV show later on, but there's no plan right now for a film.

I've waited 23 years to see a princess who looks like me, who speaks Spanish at home and loves her abuela (grandmother), and she doesn't even get her own movie, the ultimate rite of passage for Disney princesses? We've had an Asian princess movie (Mulan, 1998), a Native American princess movie (Pocahantas, 1995), a black princess movie (The Princess and the Frog, 2009), a Middle Eastern princess movie (Aladdin, 1992 — my Syrian half is grateful for this one), and a wealth of white princess movies (Snow White and the Seven Dwarves, 1937; Cinderella, 1950; Sleeping Beauty, 1959; Beauty and the Beast, 1991; The Little Mermaid, 1989; Brave, 2012; Frozen, 2013), but we still haven't had a Latina princess movie, and it's 2015, and we're still not getting one.

Why, as Disney finally begins to break down barriers and challenge their own self-made tropes, does it choose to leave Latinas in the lurch? Don't get me wrong, the fact that we have any representation at all is an amazing first step, and a TV show can reach millions of kids, but now that I've gotten that accolade out of my system, I'm done applauding nearly 100-year-old Disney's paltry baby-step diversity achievements. The fact is, Disney missed my childhood, and the childhoods of every Latina born before the new millennium. It's not about us — me — anymore. It's about our daughters, younger siblings, and extended relatives.

My 4-year-old cousin Sarah needs a princess who looks like her. She needs to consume media that teaches her being Latina is something to be proud of, something that is beautiful in its own right. She shouldn't have to figure that out when she's older, like I had to (and still am).

And no, it's not Disney's job to teach young girls they're beautiful, but they try to do it anyway, so why not include everyone? Are they excluding Latinas over something political like immigration, or quantitative, like audience survey results? Did they just forget there's one giant ethnic group they've yet to address? I don't know, and I'm getting a bit impatient waiting for the answer.

Sure, let's give Disney kudos for bringing in Latinas nearly 80 years after they made their first princess movie. But let's not forget that when it comes to being truly diverse, they still have a very, very long way to go.

And it starts with giving Elena her own movie.

More like this
Rupert Grint Just Shared A *Major* Update About Ron Weasley’s Future
By El Hunt
12 Years Ago, Austin Butler Manifested His Oscar Nom In This Disney Movie Scene
By Jake Viswanath
Sandra Bullock’s Razzies Speech Proves She’s The Ultimate Miss Congeniality
By Sam Ramsden
Anne Hathaway Shared A "Thrilling" 'Princess Diaries 3' Update
By Darshita Goyal
Get Even More From Bustle — Sign Up For The Newsletter
From hair trends to relationship advice, our daily newsletter has everything you need to sound like a person who’s on TikTok, even if you aren’t.