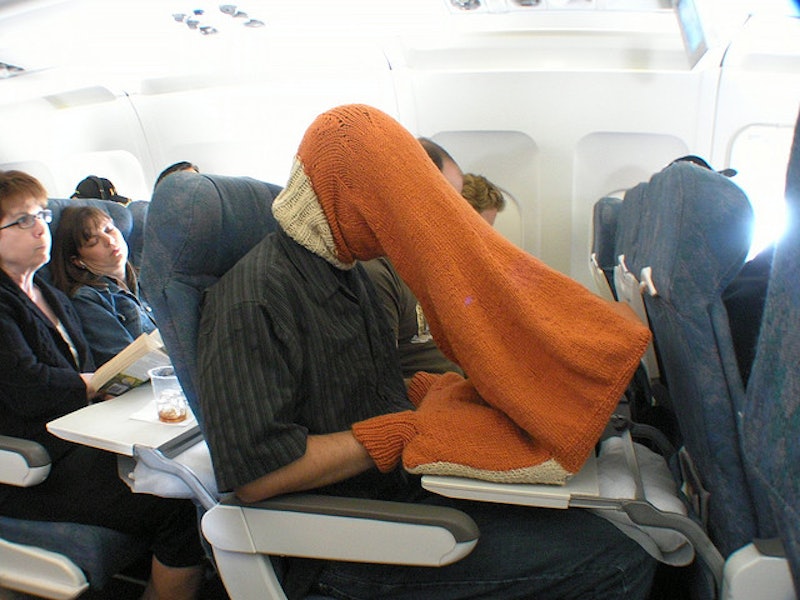 For fliers prone to sneaking in that one last pre-take-off email away from roving flight attendants, the Federal Aviation Association (FAA) has good news. Hand-held electronic devices are technically safe to use both above and below 10,000 feet. Better get that 'flying! :)' playlist going.

Even better: Besides a recommendation to lift the restrictions on device use, the investigating FAA committee has concluded that it's totally fine to use Wi-Fi during all portions of the flight as well. Owner of a teary but easily distracted child? You're sorted for takeoff — that is, if you're willing to pay for the airplane's onboard Wi-Fi system, which often isn't free. Still, by 2015, at least 85 of planes will have internet access, airlines say.

But don't go Spotifying just yet: The recommendations made by the committee are still just that. The FAA's been told to hurry up and make the changes, but they've declined to comment so far on the revelations. However, there is a chance that the rules might be relaxed by the end of the year.

Using your phone for anything other than Wi-Fi and pre-loaded music, however, would still be restricted, under separate Federal Communications Commission (FCC) rules that stem from worries about communications interference on the ground. But the FAA committee (aka. our new best friends) has suggested these rules be reviewed as well. Modern technology, they acknowledged, has made the "vast majority" of planes resistant to electronic interference.

In other Wi-Fi news, Internet provider Cisco and distraction provider Facebook are partnering up to provide free public Wi-Fi. Facebookers would simply log in to the internet with their usernames.

Cisco described the Foursquare-like promise of the collaboration: To access internet at a retail store like Bloomingdales, for example, users would 'check in' through a customized screen (which was described here, back in July — it's sort of like the welcome screen that greets Wi-Fiers at Starbucks). And instead of checking into a hotel upon arrival, Cisco said, guests could simply "check in" by signing into the app for the hotel. It eliminates queues and would allow guests to get keys faster. (But who would tell me where the spa is, dahhling?)

The partnership is seen to be a keeping-up-with-the-Googles move: The web behemoth is rolling out free Wi-Fi in 7,000 U.S. Starbucks this year. And just like Google enjoys targeting ads by picking up user information, Facebook could now get in on the game by using these external check-ins as fodder: Checking in at retail stores, for example, would let the powers that be advertise related promotions at you.

But hey, that's the price you pay for that party dress, right?

More like this
You Can Stay At The 'Hocus Pocus' House On Airbnb
By Alexis Morillo
Craving The Beach? Here's Your Guide To A Solo Vacation In Turks & Caicos
By Alexis Morillo
The 5 Best Laptop Power Banks
By Vanessa Spilios
The 8 Most Comfortable Boots For Walking All Day
By Wesley Salazar
Get Even More From Bustle — Sign Up For The Newsletter