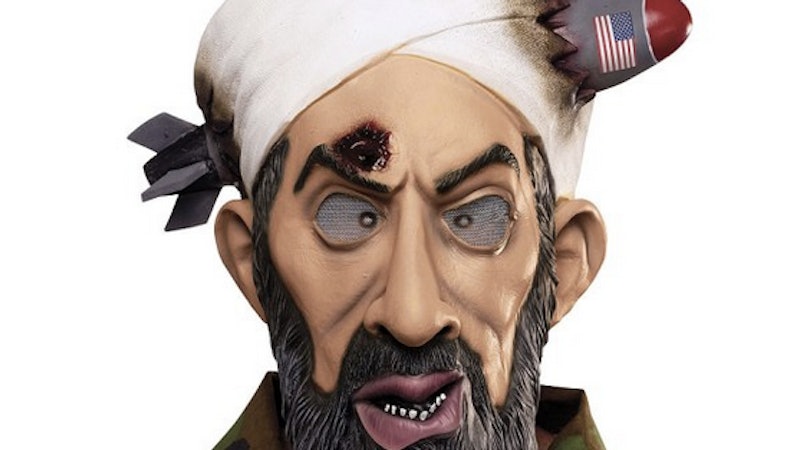 Add to this list the current rash of Osama Bin Laden costumes available at retailers. In another display of cultural tone deafness, Walmart was displaying these costumes until the Sikh community pressured them to take them off shelves, and they are still available at HalloweenCostumes.com and other sites.

"If you lost a loved one during the 9/11 attacks or during our nation's war against Al Qaeda, or if someone attacked your father in a hate crime because he wears a turban, I doubt this costume would make you comfortable," Sikh Coalition spokesperson Rajdeep Singh told The Huffington Post.

There are two primary costumes circulating, each of which is offensive in its own way. The "Fun World Adult Men's Osama Bin Laden Middle East Costume Turban + Beard", as it was called on Amazon until the item was pulled, simply consists of a fake beard and head turban, thereby conflating with Osama Bin Laden all those people that wear these items as part of their daily dress.

The "Osama Bin Laden Costume", as it is called on HalloweenCostumes,com, features a Bin Laden mask with a missile penetrating the bloodied skull. Its existence begs the question — who is buying these things? Is there really a market for such costumes? And why do retailers and people in general (aside from Prince Harry, that is) largely recognize that dressing as, say, Hitler, is a terrible idea but apparently think that dressing as another despised, deplorable perpetrator of mass murder is funny or cute? What's next? Pol Pot costumes? These people are making all those wearing slutty nurse outfits look pretty damn good.