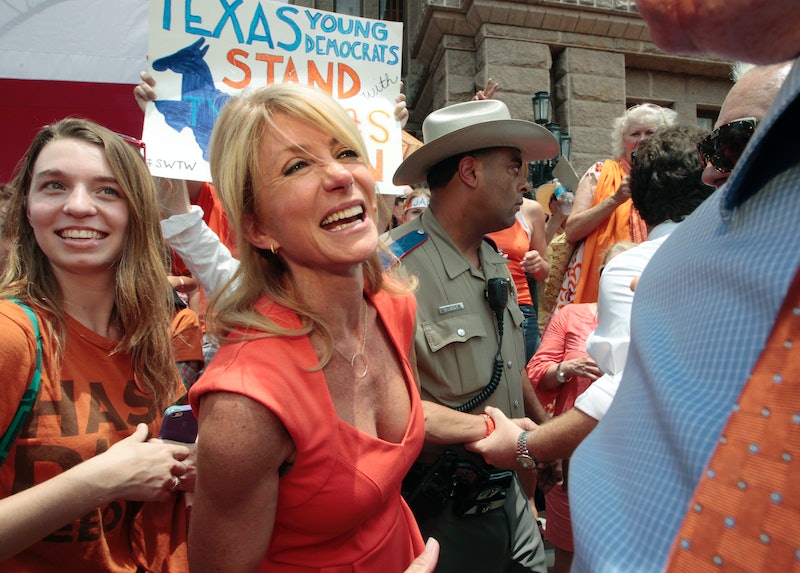 And I bet you thought being pro-choice in Texas was a political liability. Wendy Davis, the Texas State Senator whose neon-pink sneakers launched a million news stories during her 11-hour filibuster of a bill to restrict birth control access, is set to announce a run for governor of the state on Thursday. Her filibuster, and the controversy over the bill, gained Davis nation-wide fame and turned her into an overnight feminist celebrity.

Rumors of Davis's gubernatorial run have been circulating since the summer, when the 50-year-old State Senator raised over $1 million in campaign donations on the wave of popularity that followed her filibuster. Current Texas Governor Rick Perry has announced that he won't be seeking re-election. Davis's leading opponent, then, will be state attorney general Greg Abbott, a Republican.

A poll released on Wednesday showed Abbott leading in a race against Davis, with 29 percent to her 21 percent. Davis leads Abbott among black and Latino voters. She plans to announce her run in a working-class suburb Thursday.

If Davis overtakes Abbott in the Texas race, it wouldn't be the first time a nationally-popular celebrity politician overtook a less-well-known opponent with views closer to those of the electorate. In New Jersey, celebrity governor Chris Christie has an insurmountable lead over a state senator whose views more closely align with that of the electorate.

Of course, Wendy Davis fever originally spread around the country when she tried to stop a bill that would ban abortions midway into the second trimester and leave only a handful of functioning abortion clinics in Texas — the second-largest U.S. state by area. So she planned to speak non-stop for thirteen hours, while standing, and without bathroom breaks, to do so.

When Davis was forced to stop her filibuster shortly before midnight, the crowd gathered in the chamber cheered and booed to drown out the proceedings — effectively, a populist filibuster that made it impossible for politicos to get anything done. On Twitter, #StandWithWendy trended around the country.

But coverage of the filibuster was almost overshadowed by reports of Wendy Davis's sensible sneakers. Her Mizuno Wave Rider 16's rose dramatically in Amazon rankings. (The Amazon page is still inundated with political comments.)

In the last few weeks, Congressional Republican leaders have been sour that their filibusters are not getting the same nation-wide support as Davis' did.

But Davis wouldn't be the first pro-choice woman (and blonde) to assume that office. Ann Richards served as governor of the state from 1991 to 1995. Her daughter, Cecile, is an abortion-rights advocate and president of the Planned Parenthood Federation of America. Cecile worked with Davis to try to defeat the Texas bill.

Time for #RunWithWendy to start trending.