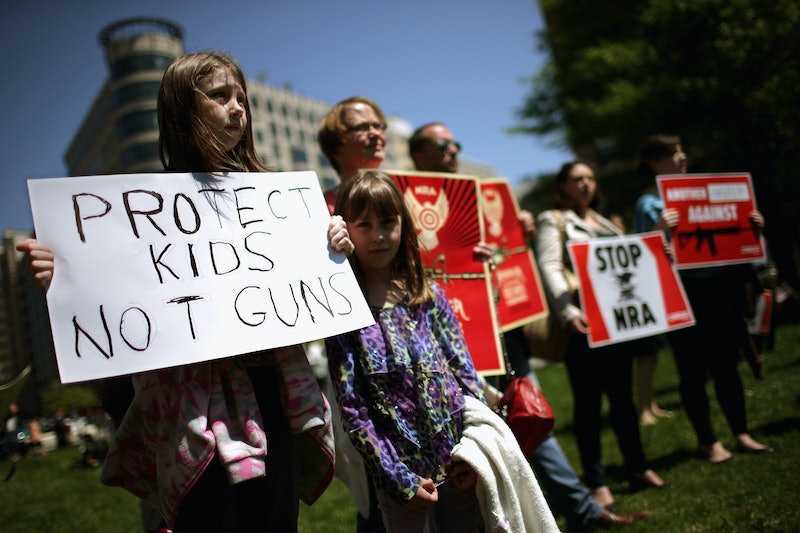 It ain't a good day to be the National Rifle Association. Amid new findings Thursday that reveal gun ownership is on the steady decline in the United States, the NRA is also up in arms about a spat of recent gun control legislation on its way to California Governor Jerry Brown, and has threatened to sue the state if he signs it.

The primary bill in the package, Senate Bill 374, has already been approved by Californian lawmakers. If passed, it would expand the definition of an assault weapon to include semi-automatic rifles with a detachable magazine (the firearm's storage compartment), or those using fixed magazines holding more than 10 rounds of ammunition. It would also outlaw most types of assault rifles, and place a ban on the sale of many semi-automatics, including some rifles often used for hunting.

If signed by Brown, the bills will constitute the nation's most sweeping gun control laws. The NRA argues that the bill is unconstitutional and violates both the Second Amendment and the Supreme Court's District of Columbia v. Heller (2008) ruling, which states that the right of an individual to possess a firearm for lawful purposes is constitutionally protected.

Furthermore, a post on the NRA's Institute for Legislative Action website continued, the bills expand California's "unjust and byzantine" assault weapons law. "Our Right to Keep and Bear Arms has never been as seriously threatened in California as it is today," the NRA post claims. "After years of incrementally adopting gun control measures, this year the Legislature decided to propose new laws adopting everything on the gun ban lobby’s wish list."

However, California's state constitution actually does not guarantee the right to bear arms, and the existing legislation is among the nation's strictest when it comes to gun control. Currently, there are restrictions placed on the use of assault weapons, and their owners aren't allowed to pass them on to anyone else in California.

Additional bills sent to Brown for approval include extending the handgun safety certificate program to include rifles and shotguns, prohibiting certain types of shotguns, and barring Californians with multiple drug or alcohol offenses from owning firearms.

It's unclear whether Brown will sign the bills, though he has to decide by Oct. 13. Although Brown has a mixed history of signing weapons legislation, California was the leader among state legislatures in passing similar laws in the wake of recent mass shootings.

The new gun control legislation comes as new research indicates that, although women seem to be buying more guns, America's household ownership of guns continues to drop. Recent data from the General Social Survey, a bi-annual poll funded by the National Science Foundation, also shows that gun ownership across the U.S. is dropping as part of a 40-year trend (Pew Research has also historically backed the GSS findings). Last year, 34 percent of American households had guns, compared with the 1970s' average of 50 percent.

The rates have continued to decline in recent years, even in the wake of a spat of mass shootings. Although it appears that ownership has increased since 2010 (32 percent in 2010 to last year's 34 percent), researchers said that difference wasn't statistically significant.

These numbers contradict media reports of guns flying off the shelves following the Navy Yard and Sandy Hook shootings. But as Director of the Johns Hopkins Center for Gun Policy and Research Daniel Webster notes, it could be that many of those buyers were already gun owners, which wouldn't have affected the data. The long-term and broader decline could be due to the decline in hunting, and a nationwide, steep fall in violent crime, which is alleviating the need for self-protection.

Despite sound evidence of an overwhelming 40-year decline, however, the NRA denies that household ownership is going down. NRA spokesman Andrew Arulanandum cites increased background checks, gun sales, and longer wait times at safety classes as signs to the contrary.

“I’m sure there are a lot of people who would love to make the case that there are fewer gun owners in this country, but the stories we’ve been hearing and the data we’ve been seeing simply don’t support that,” Arulanandum said, presumably not while looking at any of the data.