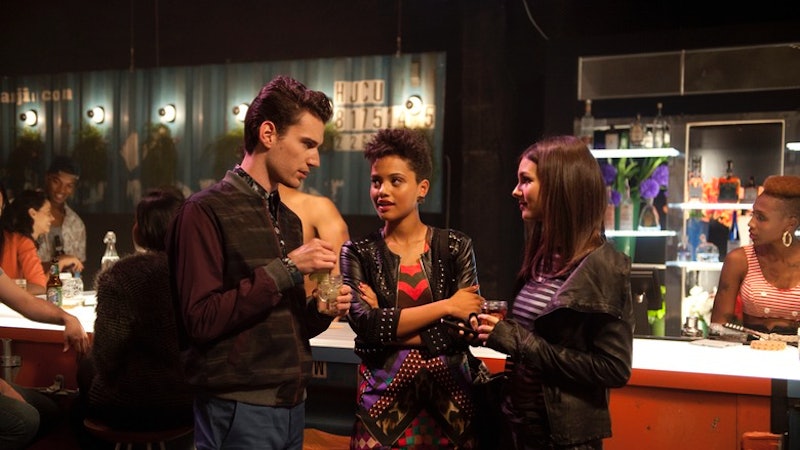 When Lindy Sampson's cyber-detective boyfriend Ben was killed off in the first episode of MTV's Eye Candy, everyone who didn't read the book was shocked to say the least. More importantly, most of those same devastated fans jumped to the conclusion that it had to be a man who killed him. Physically, the killer had to be strong enough to overpower the 20-something cop, drag him to the roof, make him tear up a bit, and slit his throat. But in an interview with Bustle, Kiersey Clemons, who plays Sophia, says we need to remember one major fact: women are smart, and a manipulative female character could convince someone else to do her dirty work.

“It could very easily be a woman who is the killer — very, very easily," Clemons says. "We cannot count the women out. I think it would more likely be a woman than a man because we can get people to do things for us...It’s definitely not all physical.”

Lindy and Sophia are both smart and manipulative and then some, which is why Clemons thinks feminism will play a major role in the Eye Candy investigation. Kiersey even says she sees her own character as a major suspect and believes the killer is more likely to be a woman than a man. It could have been a man who physically killed Ben, but we can't ignore the possibility that a woman was behind his actions.

Clemons also finds feminist themes in other aspects of Eye Candy. “I think there’s this obvious amount of girl power. It’s really easy for girls to get caught up in competition, but [Sophia's] doing her own thing and when she met Lindy she didn’t have to let the girl come and sleep on her couch," Clemons says. "How many girls do you know that do that? She saw this cool girl in the club who was obviously beautiful and rather than seeing it as competition she was like, ‘I wanna be friends with her.'"

Based on the relationship between Lindy and Sophia, Clemons says feminism comes into play consistently throughout the series. We have two bright and powerful leading ladies who would do almost anything for each other. If the show is already producing such dynamic female characters, why shouldn't the killer be female?

“It’s cool to see two strong, loyal, powerful women come together and help each other," she says. "They love each other, they’re each other’s family and that’s obviously feminism. Lindy is also not intimidated by Sophia. There’s always both sides and I think there’s a lot of that intimidation of thinking that someone is better than you — that they have a better job or they’re making more money. But it’s not like that between them at all, they see each other as equals."

However, if Sophia ends up being the female killer on Eye Candy, we could see her positive relationship with Lindy turn into something much, much darker, creating even more complex female characters on the already feminist series.

More like this
Twitter Is Identifying With Sally Field & Jane Fonda’s Friendship In New Viral Video
By Jake Viswanath
'Wednesday' Star Emma Myers Thinks A Wenclair Storyline Is “Possible” In Season 2
By Alyssa Lapid
'The Queen’s Gambit' Season 2 Tweet Wasn’t From Anya Taylor-Joy
By Mary Kate McGrath, Jack Irvin and Grace Wehniainen
Ashton Kutcher Wants Danny Masterson “To Be Found Innocent” In Rape Retrial
By Jake Viswanath
Get Even More From Bustle — Sign Up For The Newsletter
From hair trends to relationship advice, our daily newsletter has everything you need to sound like a person who’s on TikTok, even if you aren’t.