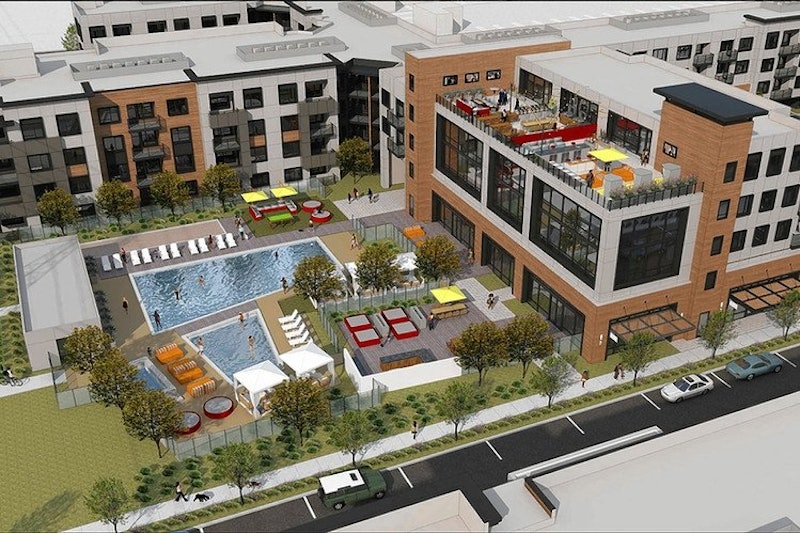 It's like Our Town, only creepier. Facebook employees are about to get a pretty massive perk: a 'company town,' conveniently located right next to the social media company's Menlo Park offices. Facebook will spend an estimated $120 million to build the 630,000 square foot rental property. The company town will include 390 rental units, a yoga studio, a convenience store, pool, sports bar, and its biggest selling point — a pet spa complete with doggy day care. The Facebook utopia (or dystopia, depending how 1984 you lean) will be called Anton Menlo.

The project was designed by South California firm KTGY Group and will include studio apartments along with one, two, and three bedroom options. Thanks to a deal Facebook cut with the city, 15 apartments will reportedly be offered at lowered rates for low-income tenants. (Wait, does that mean there are low-income Facebook employees?)

Facebook will work with real estate developer St. Anton Partners to make their dream a reality. "With the guidance of Facebook and its employees, we have designed a cutting-edge project that meets the needs and tastes of today's sophisticated renters," said Steve Eggert, a co-founder of St. Anton Partners.

But don't think that this is about the company's desperation to keep its employees. A Facebook spokeswoman says that the new company town isn't aimed at employee retention. "We're certainly excited to have more housing options closer to campus, but we believe that people work at Facebook because what they do is rewarding and they believe in our mission," she said. And then they'll never leave and they'll love us forever.

The new company housing could aid employees who struggle to find apartments near Facebook's offices, as prices in Silicon Valley and San Francisco inflate each year. Some speculate that the new complex could go the way of old factory towns, which eventually emptied out as workers looked for more separation between their private and professional lives.

If it all goes off without a hitch, work on Anton Park could begin as soon as next month with its official opening slated for 2016.

More like this
20 Smart Devices Under $35 That’ll Change The Entire Vibe Of Your Home
By Emma Carey
Here’s Why Sagittarians Should Pursue A Career In Academia
By Nina Kahn
So... When Are Gabby & Erich Getting Married?
By Kadin Burnett
How To Apply For 'Survivor' & Tips On How To Get Cast
By Meg Walters
Get Even More From Bustle — Sign Up For The Newsletter