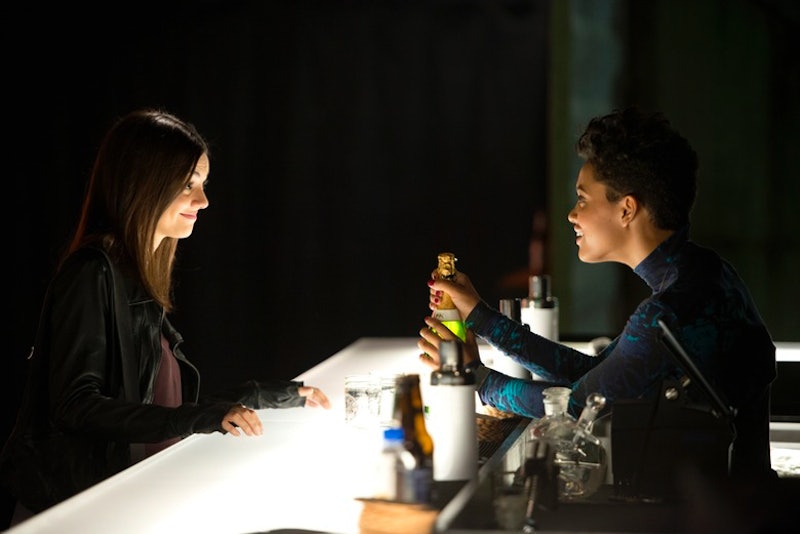 One of the biggest party fouls is when someone tells you exactly how a show or film is going to end. You just don't do it. Theories are great because they keep you guessing and they can change in a matter of seconds. But what's the fun in knowing the ending? As a fun little experiment, I asked Eye Candy's Kiersey Clemons to send spoilers about the show in emoji form, so that that she can tease some crucial moments without giving too much away.

Since MTV's Eye Candy is based off of the novel by R.L. Stine, it's really easy to find spoilers online and even easier to accidentally see something you don't want to. However during our interview, Clemons says that even if you did read the book, you have no idea what's about to happen on the MTV series. Like any other page-to-screen adaptation, the characters and storyline might be altered, which will undoubtedly affect the ending.

When I ask Cemons, who plays Lindy's roommate Sophia, what she thinks the rest of the season would look like in emojis, the result is the best Eye Candy teaser you'll find. Here's the creative emoji spoiler she shared, followed by some of the possible ways to interpret it.

More People Are Definitely About to Die

No shockers here, but that has to be what the knife means. After killing off who we thought would be the male protagonist within the first hour of the series, it's pretty obvious that Eye Candy will show no mercy in killing off its characters. The knife just reinforces that belief.

There's More Than One Person In On It

Kiersey hints in our interview that the killer could easily be a girl and that she might be manipulating people to do her dirty work. It certainly wouldn't be all that surprising if more than one character was doing the killing. After all, it would take a whole lot of effort for one person to stalk Lindy, create cyber messages, and fake surveillance videos, and kill people all at the same time. The emoji of two people standing together also suggests a team effort.

My guess is whoever is in that boat is headed in the opposite direction of New York. Unless there's some weird, Notebook-style date in the midst of a serial-killer investigation, but I highly doubt that. Maybe Tommy tries to get Lindy as far away from the city as he can. Even I have to admit it's not a bad idea. Throw all electronics in the Hudson and head south.

Or Lindy Is Kidnapped

Running away seems more logical, but I had to put a kidnapping into the mix. This person is obsessed with Lindy to the point of viciously murdering anyone who tries to get close to her. I wouldn't put it past the killer to tie her up and throw her in a boat in an attempt to stop her from helping the cops.

Someone Ends Up In A Hospital

If someone's in the hospital, as the final emoji suggests, and not a graveyard, then someone must've interfered in their attack. But that doesn't mean the killer was captured. In fact, I'm picturing a scenario way later in the season where the killer gets really close to eliminating his or her latest victim, gets caught in the act, and somehow escapes. And then Season 2 happens.