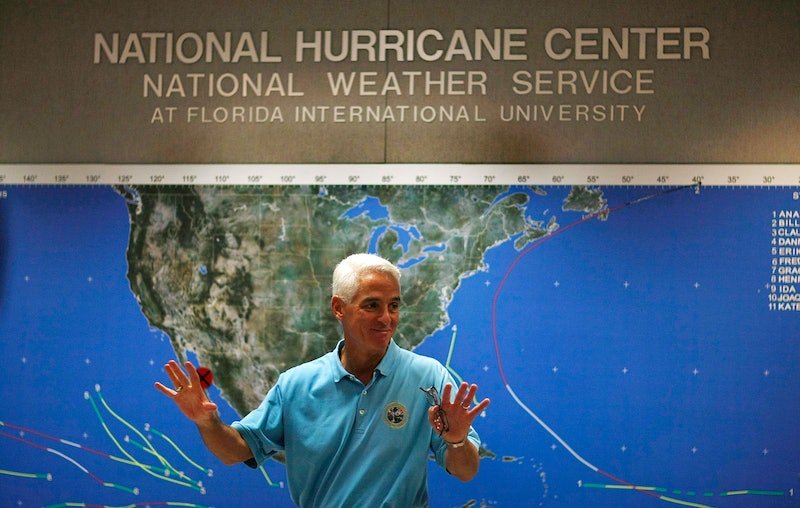 Tropical Storm Karen is already causing some problems for states along the Gulf Coast Thursday. A hurricane watch is in effect, and there is a "100 percent chance" the storm with be upgraded to a full hurricane by Friday, according to the National Hurricane Center. Portions of Louisiana, including New Orleans and Lake Ponchartrain, have been placed under a Tropical Storm watch.

Tropical Storm Karen is currently churning in the South East Gulf of Mexico, about 500 miles south of the Mississippi River, and is expected to hit land on Saturday around the Mississippi-Alabama border. The storms winds are blowing at about 65 miles per hour right now, but if those gusts reach speeds of about 74 miles per hour, Karen will go from a storm to a hurricane.

The exact strength of the storm once it hits land remains to be seen, with some experts saying that a wind shear could help weaken the mass as it moves across the Gulf.

Energy companies with workers in the Gulf have started evacuating employees in advance of the approaching storm. Along with high winds, the incoming storm is expected to dump buckets of rain on the Gulf Coast, as well as areas of Cuba and the Yucatan Peninsula in Mexico.

While the risks associated with Tropical Storm Karen seem to increase by the day, another storm brewing in the Atlantic is getting a lot less attention: Tropical Depression Jerry is currently sustained by winds of about 35 miles per hour is expected to dissipate by the end of the work-week after a series of downgrades over the past few days. The storm is still hundreds of miles out to sea and poses no risk of making landfall.