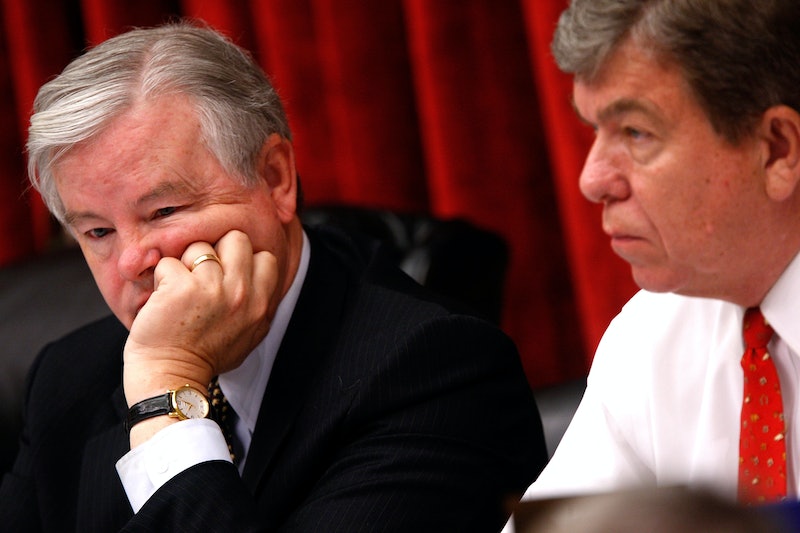 Old-time GOP members are practically bending over backwards as the federal government shutdown ends its first work week to show that they're not like their Tea Party compatriots. Instead, they're starting to speak out about how the populist, ultra-conservative wing is playing with fire, and that their tactics are helping the president look better.

The New York Times reports that critiques of the Tea Party strategy come most often from Republicans representing swing areas. The "suicide caucus," in contrast, comes from areas of the country that are a deep red. They represent few urban areas, and their districts are getting whiter, where Obama tanked royally in 2012, and where it's and more popular to be a Republican — completely going against general national trends.

The tensions came to a head Wednesday when Senator Ted Cruz refused to condemn a statement from a conservative group critiquing 25 other GOP senators for supporting a procedural vote that would allow the Senate to vote on a government funding bill that didn't defund Obamacare. A senator who was there described what happened next as "a lynch mob."

Others say that the Republican Party's role in the government shutdown has harming their own reputations while helping keep Obama's previously-plummeting approval rating up. Former Mississippi Governor and Republican National Committee leader Haley Barbour said that Republicans are "the only thing" keeping Obama's ratings afloat. “We have to get to the best resolution we can under the Obama administration, and then focus on some other things," he said.

President Barack Obama, meanwhile, seems content to let the Tea Party run the Republicans into the ground. WonkBlog's Ezra Klein points out that the Senate's Continuing Resolution is way closer to Paul Ryan's budget than to what the president had proposed, and it seems like he's had enough. On Thursday, news emerged that Republicans might try to combine negotiations on funding the government with those over raising the debt ceiling in order to force some compromise. That would mean extending the circus in Washington even longer, and perhaps much more dire economic consequences.

If Republicans take that route, they're gambling on a much bigger issue and may also settle for a broader compromise: axing the medical device tax, combined with spending cuts across the board. But political analysts are still unclear on whether House Majority Leader John Boehner has regained control over his caucus, or whether that idea is something injected into the rumor mill from the offices of a fringe member.

In the midst of this, Obama also cancelled the remaining stops of his planned trip to Asia Thursday night. On Wednesday, he already cancelled visits to the Philippines and Malaysia, saying that the shutdown made them impossible to plan. On Thursday, he announced that he wouldn't make it to Indonesia for an economic conference or to Brunei for one on security. (He was also expected to discuss the situation in Syria with Russian president Vladimir Putin in Bali, Indonesia.)