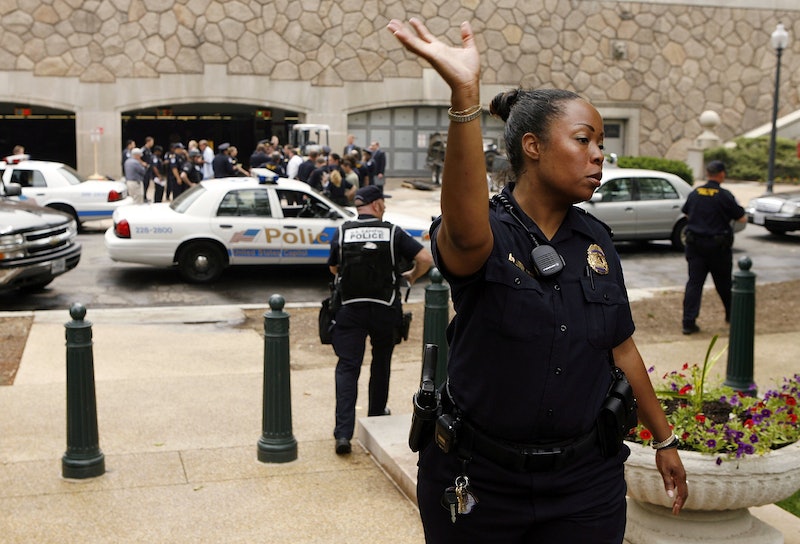 New details emerged overnight in the shooting death of Miriam Carey, the woman who is believed to have run down barricades at the White House before sparking a car chase that sent the Capitol into lockdown. People were briefly instructed to stay inside the building Thursday afternoon after shots rang out. When Carey got out of her car, she was shot and killed by police as her toddler sat in the back seat. Apparently, she wasn't armed.

News reports are providing more information on the 34-year-old, a dental hygienist from Connecticut. Friends and family were apparently surprised that she could have been at the center of this controversy, but some said that she suffered from postpartum depression.

Police also searched Carey's home, evacuating other residents while they made sure the building was safe. The search team even included a chemical weapons squad, but the building was declared safe to enter by morning.

Carey may have believed that President Barack Obama was stalking her, NBC reports. Meanwhile, the Capitol police were deemed essential personnel and have been working without pay throughout the federal government shutdown. It's unclear when they'll see their next paycheck, and when — or whether — they will be paid for the past week. A police officer and a secret service agent were also injured in the chaos yesterday.

Still, no one is quite sure how to talk about what happened.

This wasn't a terrorist act, or a mass shooting, or an unavoidable accident. We don't know how to categorize a woman who appeared to be having a hard time but pushing through, who did something irrational but was ultimately not a threat to many people. (Yes, cars kill. But they're not guns or bombs — you can, at the very least, see them coming.)

Carey's sister's response perfectly captured how we evaluate people: "She works, she holds a job,” Amy Carey said of her sister, who was a dental hygienist. “She wouldn’t be in D.C. She was just in Connecticut two days ago, I spoke to her.”

Unlike nearly everyone else in recent years who's been a public threat, Carey didn't set off alarm bells. Navy Yard Shooter Aaron Alexis had said that he heard voices coming to him through walls and ceilings. Adam Lanza, the Sandy Hook shooter, had violent outbursts in the past and suffered from a disorder that made him hypersensitive to different sensations. Others, like Colorado movie theater shooter James Holmes, had been socially withdrawn, isolated.

Carey, evidently, had friends, and a job. She was a little rough around the edges (and even lost a job over that), but had a boyfriend and a child. Despite the fact that family and friends knew she was depressed after giving birth, she was doing okay by all social measures. It seems that maybe, it's time to reevaluate how we make those evaluations. Now that insurance plans are obligated to provide — or improve — on what mental health services are covered, it may be time to acknowledge that simply holding on to a job or appearing normal is not enough.

After the Navy Yard shooting, Senators Kelly Ayotte and Mark Begich issued a bipartisan statement calling for reform and increased training to help teachers identify those suffering from mental illness. "Given the clear connection between recent mass shootings and mental illness, the Senate should not delay bipartisan legislation that would help address this issue," it read. But amidst the government shutdown, it's unlikely that the issue will be reexamined anytime soon.