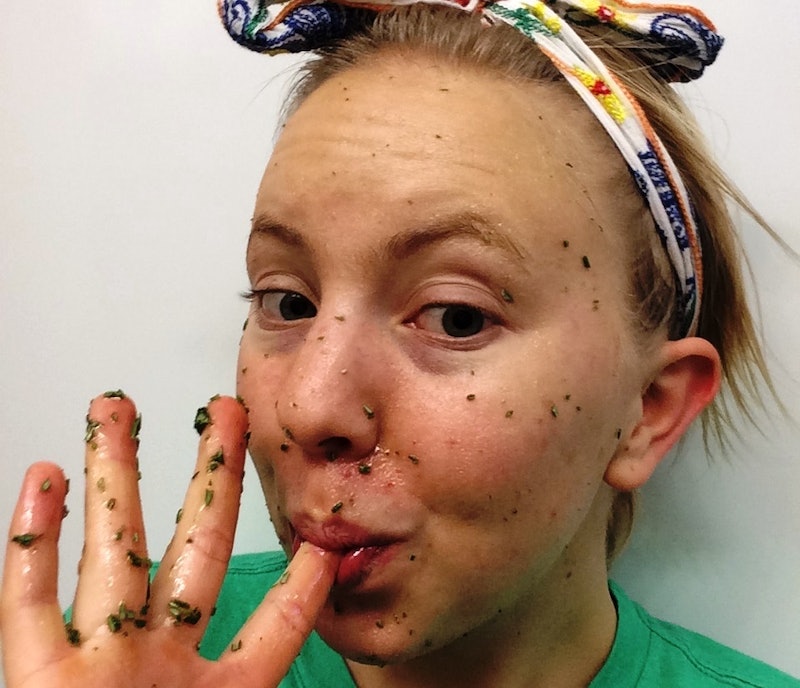 Are rosemary and money good for your skin? I meant to write "honey" but the typo is perfect. Money is definitely good for your skin. Bathe in it. Money is the only acceptable moisturizer. Money has, like, cocaine residue, right? AND COCAINE RESIDUE IS GOOD FOR YOUR SKIN. Okay, back to legal skincare: Rosemary and honey may or may not be good for your skin. Who the heck even knows? I rarely bother trying to stay scientifically informed about beauty ingredients (R.I.P. Brightest Bulb in the Box) because the information is all conflicting. It's like how the diet of the week is in perpetual flux — according to the cover of January Vogue (which I haven't read yet), "Eat like a Viking," is the hot new instruction. Don't skip the vegetables, kids, but anything else is up for debate.

Honey actually is good for your skin, because Crunchy Betty says so. I love Crunchy Betty. However, I am bored with internet "sources" claiming "this and that" despite dubious justification. I want to abandon anything but the most basic scientific method. So this rosemary-and-honey mask I'm going to tell you about is an experiment. The hypothesis is that my skin will feel nice after doing it, but you never know — maybe it'll melt off instead. I can only draw conclusions about my own skin and my own experience. If your face falls off, feel free to send me angry emails.

That is rosemary. I picked it from my garden, but you can buy it at most grocery stores. Rosemary oil is also ostensibly good for your skin, because of... *picks from a hat* antioxidizing wizardry. Oxidizing is very bad and not a routine chemical process, dontchaknow. FREE RADICALS. ALL THE WRINKLES FOR YOU, MADAM. Ahem. Seriously though, rosemary oil is touted by people who don't bother to cite anything. One of the things that routinely depresses me is all the college graduates who do their jobs much worse than I, the dropout, would.

So: Combine a small handful of rosemary needles (they look like pine needles but they're softer) with a tablespoon of raw honey (unpasteurized) and half a tablespoon of coconut oil. You could do this in a food processor but I used my mom's chopper-masher thingy. What are those called? It looks like a weapon from a cheesy "ninja" movie.

I could kill a man with that. I'm not going to, but, you know, I could. It's nice to feel powerful. I swear, I have no murder plans.

After combining the ingredients with whatever dangerous blade you have on hand, smear the mixture on your face. Wait five to ten minutes.

Why yes, it is I, Sonya! Come to you from the generation of #SelfieJournalism! With green bits on my face! Gosh, aren't I the cutest? You just cringed at my self-congratulation but self-esteem is fashionable now and rightly so. I will praise myself as much as I want.

Anyway, what did I learn from this intrepid scientific experiment, undertaken for the good of all humankind? Shockingly, folks, coconut oil is moisturizing. Other than that, the experience was fine but not earth-shattering. I probably wouldn't repeat it, sheerly out of laziness. Granted, I also don't wear makeup because I can't be bothered to take it off. None of this is impressive because Millennials routinely brag about how much time we spend watching Netflix. "No, I binged on more House, M.D. than you!"

So, what have I concluded from concocting a hopeful housewife's beauty fix? Equivocating aside, it's nice to put something edible on your face that you can use to fry salmon later, or dump in your tea. I went the salmon route and it was decently tasty.

More like this
6 Asian Beauty Rituals That Will Soothe Your Skin, Scalp & Mind
By Jennifer Li
13 January 2023 Beauty Launches Our Editors Can't Get Enough Of
By Rachel Lapidos
I Tried Peace Out Skincare's Acne Day Dots Under Makeup & I'm Impressed
By Olivia Rose Rushing
The Case For Using Your Fanciest Beauty Products Every Single Day
By Carolyn Steber
Get Even More From Bustle — Sign Up For The Newsletter
From hair trends to relationship advice, our daily newsletter has everything you need to sound like a person who’s on TikTok, even if you aren’t.