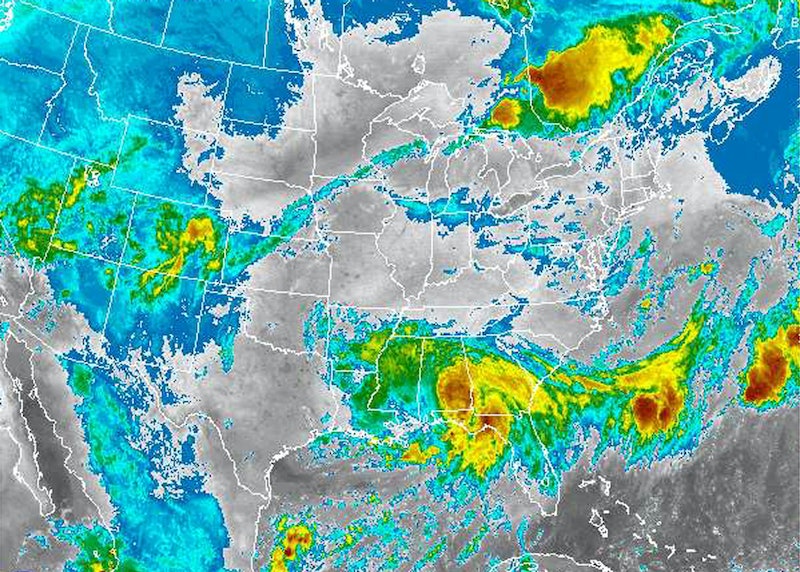 Tropical Storm Karen is making her way towards the Gulf Coast Friday, as furloughed workers are being called back to prepare for what could be the first big storm to hit the U.S. this hurricane season. As everyone waits to see whether or not Tropical Storm Karen will strengthen into a hurricane before she makes landfall this weekend, government officials are wasting no time when it comes to preparing for the storm. Multiple areas of the Gulf Coast, from Florida to New Orleans, remain under storm and hurricane watches.

Tropical Storm Karen's winds were blowing at about 60 miles per hour on Friday as the storm approached from about 275 miles off shore. Though it isn't expected to grow much stronger today, there's still a chance that winds could increase on Saturday, just as the system hits land.

Even if the storm's winds don't increase enough to classify Karen as a full blown hurricane, the wet weather the storm brings with it could still cause water levels to increase and flooding to become a major problem. Michael Palmer, a meteorologist for The Weather Channel, said he anticipates that the storm could dump up to four inches of rain on Gulf Coast states.

Some Federal Emergency Management Agency workers who were forced to take unpaid leave days thanks to the government shutdown have been called back to the job to cope with the impending storm. Both Mississippi and Louisiana have already declared states of emergency.

But the Gulf Coast isn't the only region bracing for a storm this weekend: Wyoming and South Dakota could see up to two feet of snow as a very early winter storm moves through the area. The arrival of the storm would bring snow to the states almost a full month earlier than the first snowfall of 2012.

A severe weather outbreak —which may include tornadoes — could be on tap for a portion of the country stretching from Oklahoma to Wisconsin. Not to be left out on the West Coast, Californians are bracing for potential fires as the Santa Ana winds are also expected to pick up this weekend.