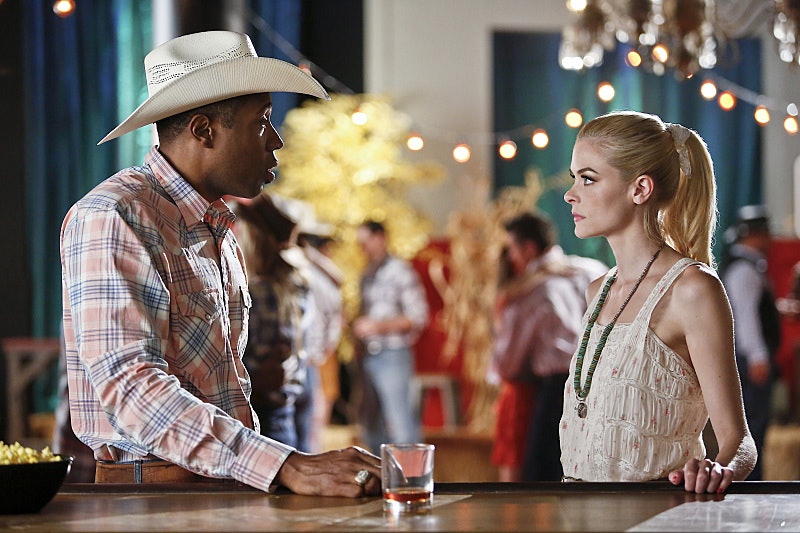 With Zoe and Wade's relationship on Hart of Dixie finally at a stand still — and a healthy one at that — fans have moved on to another potential power couple. If you're like me, you've been fishing for spoilers on the future of the Lemon-Lavon love story and luckily we won't have to wait much longer. According to the official synopsis, Episode 5 "Bar-Be-Q Burritos" will find Lemon and Lavon on a shared mission to move on for Annabeth's sake, but it can't possibly end that way.

In the event of the 10-episode season being HoD's farewell, executive producer Leila Gerstein promised E! Online that the writers are on a mission to tie up any loose ends — and that includes Lemon. They just might wait until the final episodes to make it happen.

And to all Lavon's plan I say, random act of kindness, my ass. There is definitely an ulterior motive behind Lemon's new scheme to get George and Annabeth together and in Bluebell, no good deed goes unpunished. In the midst of Lemon and Lavon's attempts to move on with their lives, these are three of the things that are certain to happen between them in the coming episode.

Setting Annabeth Up With George Will Only Delay Their Happy Ending

Lemon's schemes tend to cause even more HoD drama than even Zade does. Five episodes in, the "Bar-Be-Q Burritos"

promo teases what George calls a "triple scheme," and you know nothing good can come of it. First of all, how in the world, four seasons later, does Lemon not realize that both her best friend and ex-fiance can smell her schemes a mile away? And you'd think Lavon and Lemon would be worried about what might happen as soon as Annabeth realizes the ulterior motive. Their best plan of action would have been just to tell her, but instead they're about to make their A.B. situation so much worse.

On top of everything, nothing brings Lemon and Lavon closer than working together. It happened with the turtle races in Season 1 and again with the mayoral campaign in Season 2. So who's to say it won't happen now? Well, Annabeth if she has anything to say about it — making it all the harder for them to move on.

Trying to Move On Lands Them Both at The Singles Hoedown

Meanwhile, Lemon (Jaime King) and Lavon (Cress Williams) are trying hard to move on with their lives, but when they run into each other at a Singles Hoedown, they realize it might be easier said than done.

I have to give Lemon and Lavon a lot of credit for even agreeing to go to a Singles Hoedown. It just goes to show that Lemon isn't nearly as stuck-up and selfish as she once was and is truly making an effort to put her best friend's happiness above her own. On the other hand, if Lemon were to reciprocate Lavon's feelings, he would succumb in a second regardless of A.B. But seasons ago Lavon would've been moping around town for weeks and instead the mayor's headed to a hoedown.

The thought that Lavon has grown so much paired with the fact that he's trying to get over Lemon will only make it harder for her to move on. Finding themselves at the same hoedown outside of Bluebell isn't likely to help either.

If They Do End Up Together, It'll Be a Long Way Off

With Wade and Zoe finally in a good place, all eyes are going to be on Lavon and Lemon for the major drama here on out. A few episodes ago I would have told you she'd end up with George, but now that we know George isn't the answer, the suspense continues. Sure Zade will have a bumpy road too, but we know they'll end up together — which leaves Lemon with all the drama. We have to remember that these next five episodes might be HoD's last, so they have to make the drama last. Between the Singles Hoedown and working together to set up A.B. and George, it looks like Episode 5 will only be the beginning of the end game with Lemon and Lavon.

More like this
'The Queen’s Gambit' Season 2 Tweet Wasn’t From Anya Taylor-Joy
By Mary Kate McGrath, Jack Irvin and Grace Wehniainen
Linda Ronstadt’s “Long Long Time” Plays A Pivotal Role In The Last Of Us
By Brad Witter
Taylor Swift Visited The 'Glee' Set For This Bizarre Season 5 Episode
By Grace Wehniainen
'Wednesday' Star Emma Myers Thinks A Wenclair Storyline Is “Possible” In Season 2
By Alyssa Lapid
Get Even More From Bustle — Sign Up For The Newsletter
From hair trends to relationship advice, our daily newsletter has everything you need to sound like a person who’s on TikTok, even if you aren’t.