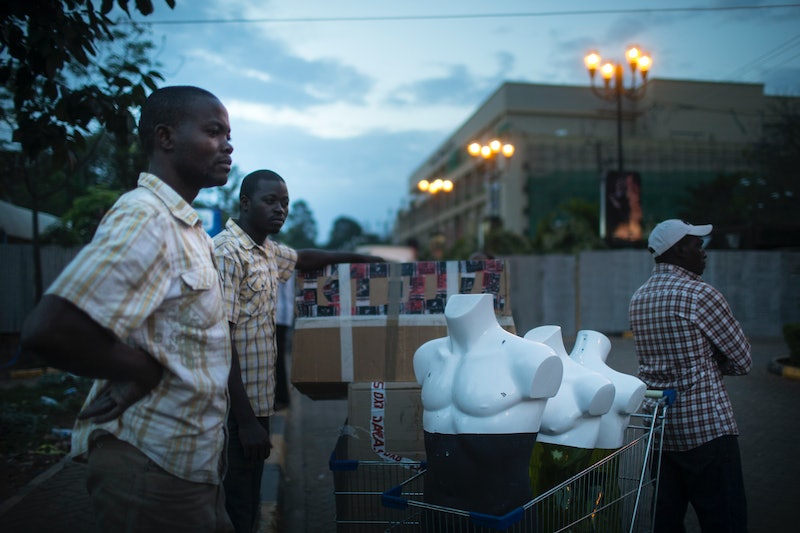 The ground hasn't even set over the graves of the victims of Kenya's mall shooting, but already the country is experiencing more clashes between Muslims and Christians over the assassination of a Muslim cleric. Ibrahim "Rogo" Omar and three others were shot Thursday night, giving way to riots that included a church-burning.

The imam, who had been linked to terrorist group al-Shabaab, was shot in Mombasa, in an attack apparently similar to one that had been carried out against another extremist cleric last year. The other cleric, Aboud Rogo, had preached at the same mosque, and Ibrahim Omar inherited his nickname after Rogo's death last year. Their mosque is widely said to attract worshippers sympathetic to the al-Qaeda linked Shabaab group.

Tensions were already high after the Westgate Mall crisis, during which al-Shabaab reportedly peppered hostages with questions to prove their Muslim faith. Some report being asked the name of the Prophet Muhammad's mother, or being asked to recite the declaration of faith or a prayer. Now, other clerics are saying that Omar's assassination was a targeted hit by the Kenyan army.

"The police are killing people while saying it is a war against terrorism, this is a war against Islam," said Abubaker Shariff Ahmed, a radical cleric who has been sanctioned by the United Nations Security Council. They said he was "a leading facilitator and recruiter of young Kenyan Muslims for violent militant activity in Somalia."

Kenya shares a border with Somalia, a failed state whose the government is no match for al-Shabaab's militants. Unlike Kenya, Somalia is a majority Muslim state, while an overwhelming percentage of Kenyans are Christian.

The police in Mombasa vehemently deny any involvement in Omar's death, saying, "That's not how we operate."

Assassinating Omar would having in fact been a poor move for the police force, and one that would have made the Imam an even bigger martyr — and recruiting tool — for al-Shabaab's cause. But given the sectarian tensions in Kenya — and even infighting within al-Shabaab — the list of suspects is endless.

Still, youth riots burned down a church run by the Salvation Army. The church stood on the same street in the Majengo district as the Masjid Musa Mosque, of which Omar was the imam. At least four people were killed, and police had to use tear gas to disperse the crowd. It's unclear whether riots will continue, or how Kenya will tackle the growing threat from al-Shabaab in it's Northeast neighbor.

More like this
Chris Kaba's Family Continue Fight For Justice After Viewing Police Bodycam Footage
By Sophie McEvoy
Black History Month UK’s 2022 Theme Calls For Action, Not Words
By Maxine Harrison
The Queen’s Cause Of Death May Not Be Formally Announced
By Shahed Ezaydi and Catharina Cheung
Buckingham Palace Shuts Down Rumour About King Charles III's Coronation
By Sophie McEvoy and Sam Ramsden
Get Even More From Bustle — Sign Up For The Newsletter