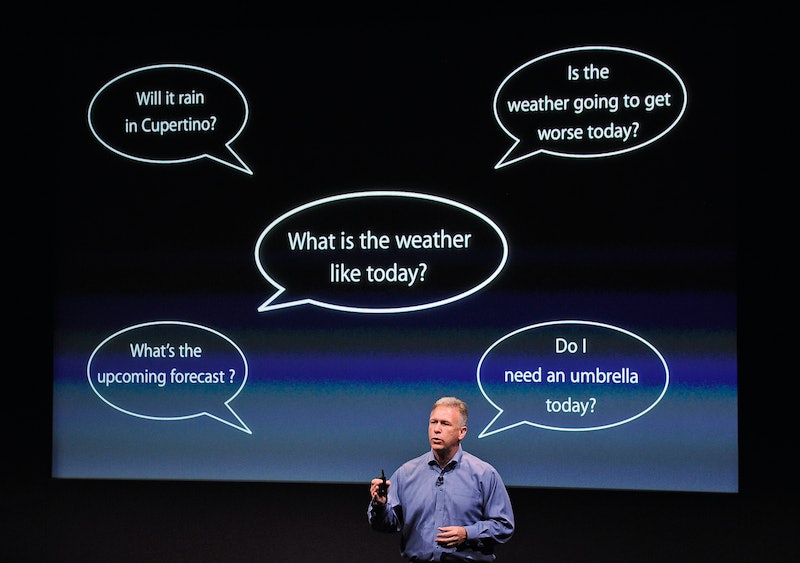 Until Siri was recently demoted by iOS 7 in favor of a string of new, exciting (and male!) voices, she was once the personal-assistant queen of the iPhone. On Friday, CNN broke the shroud of mystery surrounding the voice actor behind America's Siri and introduced Susan Bennett, an Atlanta voice actor who recorded a sequence of voice commands for a software company back in 2005. Most shocking? Apparently, Bennett didn't know her voice had been purchased by Apple until she heard Siri speak six years later.

Bennett has worked in voice acting for decades, and can be heard reverberating through airports, train stations, and in commercials. She came to CNN after the website the Verge proposed that Siri was likely Bennett's voice-actor colleague Allison Dufty, who promptly denied the claims. Bennett's fellow Siris in the United Kingdom and Australia have already come forward with their real identities, and Bennett's claims have been confirmed by voice analysts and, um, anyone who's heard her speak. Seriously: Imagine how creepy it'd be if you happened to, say, run into Bennett and ask her for directions.

In 2005, Bennett recorded a series of voiceovers for ScanSoft, who a few years later became a division of Nuance Communications. Nuance is widely speculated to have provided Siri software for Apple. Bennett has signed a contract allowing her voice to be used for whatever purpose, but was still shocked when a colleague emailed her in 2011 saying they'd been playing with his new iPhone (Siri was introduced in iOS 5 in 2011) and recognized her voice. Said Bennett to CNN:

There are some people that just can read hour upon hour upon hour, and it's not a problem. For me, I get extremely bored ... So I just take breaks. That's one of the reasons why Siri might sometimes sound like she has a bit of an attitude. Those sounds might have been recorded the last 15 minutes of those four hours.

Techies were confused when the app Cue, which acts as a intelligent personal assistant, shut down without notice or explanation this week. It's now widely speculated that Cue was bought by Apple for more than $40 million, since the company is looking to extend its reach as a personal assistant for its next range of iProducts. The integration of Cue would reportedly combine the "Today" pull-down page on your iPhone interface with the other apps on the phone. Translation: you'd have more personalized updates ready and waiting, like calendar appointments, friends' activity, you name it. The feature would be in direct competition with Google's intelligent-assistant service Google Now.

Apple hasn't commented on either of the Friday rumors, though they're probably pretty busy trying to fix an iMessage bug that disappointed millions of users after they upgraded to iOS 7. Apple's also just hired a cable-TV guru to lead their television team, prompting reports that the company's next goal will be an major reboot of Apple TV. CEO Tim Cook has long faced criticism that the company has failed to innovate in recent years, so he may well be plotting two abrupt changes in direction: the company's TV service, and that fabled smartwatch they've been quietly working on for quite some time.

And, um, this is happening, to coincide with Twitter's IPO filing.

More like this
How To Turn Off Night Mode On Your iPhone Camera
By Emma Carey
Behind The Hilarity Of The "POV: You Walk Into My Room" TikTok Trend
By Lexi Inks
The 7 Best Laptop Stands For Zoom Meetings
By Megan Gray
The 8 Best Headphones For Pelotons
By Megan Gray
Get Even More From Bustle — Sign Up For The Newsletter