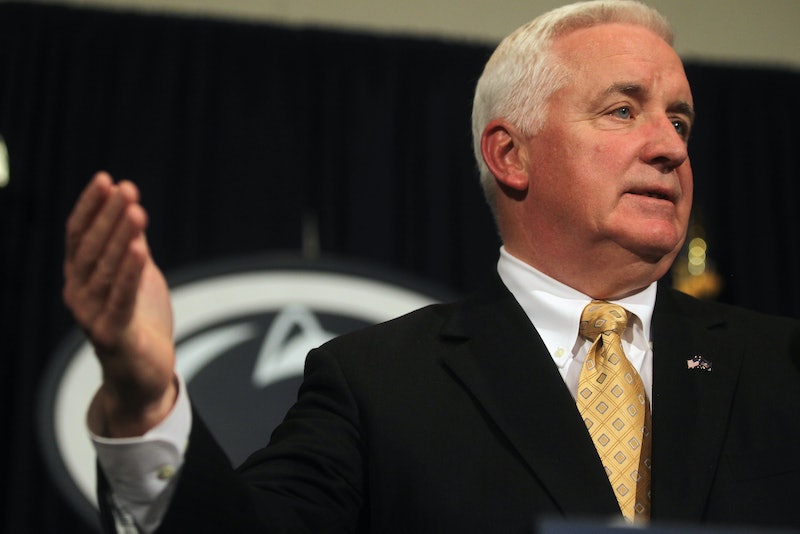 Oh brother, looks like Pennsylvania Governor Tom Corbett has decided to say words again. In a TV interview this morning, Corbett was asked about a comment he made earlier this summer, in which he compared gay marriage to two 12-year-olds getting married.

"It was an inappropriate analogy, you know," Corbett said. "I think a much better analogy would have been brother and sister, don't you?"

Corbett published a Facebook note later apologizing for the comment, a method of expressing deep emotion all middle schoolers can attest to.

My words were not intended to offend anyone. If they did, I apologize.

I explained that current Pennsylvania statute delineates categories of individuals unable to obtain a marriage license. As an example, I cited siblings as one such category, which is clearly defined in state law. My intent was to provide an example of these categories.

Corbett's comments come after an awesome country register, D. Bruce Hanes, decided to circumvent the state's ban on same-sex marriages in Pennsylvania by not asking couples their gender when applying for licenses (so clever!). A state appeals court told him to stop that right now, so Hanes kind of had to. In a legal brief Corbett's lawyers filed in August to stop same-sex couples from interfering in the lawsuit, they compared same-sex marriage to one between 12-year-olds, saying if they were "issued a marriage license and tried to defend it in court, they wouldn't be taken seriously because the license was never valid."

Currently, the state is facing increased pressure to overturn to its ban on same-sex marriage. Two of the couples Hanes granted licenses sued to overturn the ban. The American Civil Liberties Union is now in on the case, though Corbett is asking the court in Harrisburg Monday to dismiss its lawsuit.

Mark Aronchick, a lawyer for the same-sex couples in the August lawsuit, said Corbett was being "insensitive, insulting and plainly wrong."

"In other words, some kind of incestuous relationship," Aronchick said. "He's just out of touch on this one."

After a debacle earlier this summer involving telling low-income Pennsylvanians on Medicaid that they need to stop "going and going and going" to the doctor, an August poll showed Corbett's approval ratings at an all-time low. He was also dubbed "America's Most Endangered Governor" by the Washington Post in July, which isn't exactly a superlative anyone wants in their public-office yearbook.