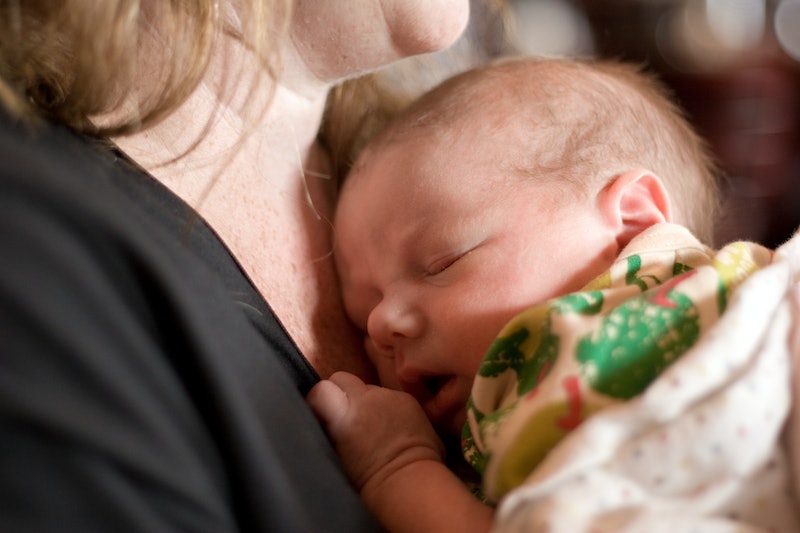 Authorities are at a loss to explain Miriam Carey's actions in Washington, D.C. yesterday. The 34-year-old dental hygienist and mother was ultimately shot and killed by police after ramming her car into a barrier outside the White House and then leading cops on a high-speed chase toward Capitol Hill. Carey's one-year-old daughter was in the car's backseat but remained unharmed. Now Carey's mother is suggesting the baby may help explain what sparked Carey's bizarre behavior.

Idella Carey told ABC News that her daughter Miriam had been suffering from postpartum depression. A few months after giving birth, "she got sick. She was depressed. ... She was hospitalized," Idella said.

But don't depressed people withdraw — not try to drive their cars into government buildings? Well, that depends. While violence isn't typically associated with postpartum depression, mood disturbances, intense anger and suicidal ideation are all possible. Let's take a closer look at what postpartum depression is (and isn't).

What is postpartum depression?

People sometimes refer to the "baby blues" women get after childbirth. It's common for pregnancy hormones and the stress of caring for a newborn to cause mood swings and crying spells. This is normal for new mothers and tends to pass quickly, according to the Mayo Clinic. But postpartum depression is a more severe, longer-lasting form of post-childbirth mood disturbances.

What are the symptoms of postpartum depression?

Postpartum depression may start out as anxiety, irritability, crying jags, mild mood swings, and decreased concentration. This then gives way to more intense symptoms, such as overwhelming fatigue, loss of appetite, insomnia, anger, loss of sex drive, severe mood swings and feelings of guilt or inadequacy that last at least a few weeks. Postpartum depression can also prevent new mothers from feeling bonded with their babies and lead to thoughts of self harm. But "it’s not common at all for women with postpartum depression to become violent," said Northwestern University psychiatrist Nehama Dresner.

Does postpartum depression lead to psychosis?

Postpartum psychosis is a separate condition that can also afflict new mothers, especially those with bipolar disorder or existing mental health problems. It's rarer than postpartum depression, and usually starts to develop within the first two weeks of giving birth.

What are the symptoms of postpartum psychosis?

In addition to some depressive symptoms, women experiencing postpartum psychosis may also be confused or disoriented and have hallucinations, delusions, and paranoia. All of this can lead to attempts at self-harm or attempts to harm the baby.

"Although the classic description of postpartum syndromes suggests the symptoms should start within four weeks of giving birth," psychiatrist Dost Ongur told ABC, "there is no limit to how long they can last, especially if not treated or inadequately treated. It is not unheard of for symptoms to persist for a year after giving birth."

Reports have begun to emerge suggesting Carey suffered symptoms consistent with postpartum psychosis. Sources told ABC that in the past year, Carey had begun to refer to herself as a "prophet" and believed President Barack Obama was electronically monitoring her house.

More like this
19 Latinx Therapists & Mental Health Experts To Follow On Instagram
By Kaitlyn Wylde, Naydeline Mejia and Lexi Inks
This Psychological Effect Might Be Keeping You From Hitting Your Goals
By Lexi Inks
5 Ways To Help People Impacted By Hurricane Ian In Cuba & Florida
By Emma Carey
Chelsea Clinton On The Best Advice She Ever Got From Her Mom
By Brianna Kovan
Get Even More From Bustle — Sign Up For The Newsletter