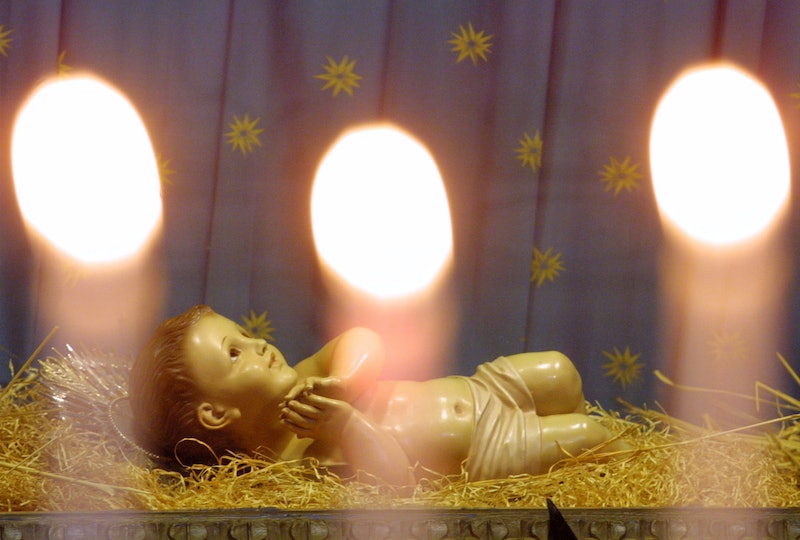 "Babymaking" is now a phrase to be taken literally. Amid hugely controversial ethics debates, California genetic-testing company 23AndMe has been awarded a patent for technology with the capability to pre-design the traits of a baby. The system, if used, would help prospective parents formulate what its opponents call a "designer baby" — but 23AndMe have sworn that they have no plans to actually use it. Which is probably what Dr. Frankenstein said at some point, too.

The patent, filed five years ago by the company — they've since admitted "there was some thinking" that they could use it in fertility clinics — is essentially a DNA analysis tool that predictively maps how parents could pick out ova and sperm donations to select a number of traits. It uses a DNA sample (aka a swap o' saliva) from each parent to do so. Brown-eyed baby? Lactose-tolerant infant? And how would they prefer the earwax? Seriously: It's like a fancy version of those "merge-two-pictures together-here's-your-baby" websites people go on at midnight after a bottle of wine.

Many bioethicists are up in arms about this new arena of technology, claiming it's a gateway into "direct-to-consumer genomics," a phrase that sounds like the main arc of a dystopic mid-century sci-fi novel. Except, this is real. After all, 23AndMe brands itself as "democratizing the genome," which is sort of shiver-inducing: "Let's vote, darling! Shall we have a sprinter or a marathoner?"

A recent article in journal Genetics and Medicine expresses deep concern over the technology. It picks apart the patent's wording, and translates its summary: "[to] increase the likelihood of producing a human baby with characteristics desired by the prospective parents." The same article translated the patent into layman English, which resulted in phrases like "shopping lists" and wording such as "I prefer", as well as some seriously creepy choices: “longest expected life span,” “least expected life cost of health care,” or “least expected cumulative duration of hospitalization.” It's dramatic, perhaps a tinge hyperbolic, but they make their point.

The same article points out that in no way is the technology a guarantee that the desired results will occur — and 23AndMe doesn't claim to guarantee any such thing. Genetics is, after all, predictive. Selecting for the traits with 23AndMe is essentially a way to optimize the probability of getting the phenotypes (manifested characteristics) the parents want. Furthermore — and most ethically — they point out that screening for serious conditions is generally considered ethical. However, looking for "cosmetic" traits like athleticism or blue eyes? Kinda close to eugenics.

The company denies that it would use the technology for producing green-eyed, marathoning mathematicians. It is, they said, a tool that would allow parents to speculate more scientifically about what their baby might be like, kind of like how some girls speculate about what their babies with Ryan Gosling would look like (beautiful, all of them). This one just uses a DNA sample to do so.

As 'ScottH' wrote in a blog post on the 23AndMe site:

We offer parents a chance to look at the traits and conditions they might pass onto their children, something that many couples attempt to do without using genetics. Rather they look to their observable traits and medical histories within their own families. For example, prospective parents may be curious as to whether their children will have blue eyes or brown, or curly hair or a dimpled chin. Couples may also want to know about more serious conditions and risks that sometimes run in families. 23andMe offers a chance to use genetics to look at both traits and other inherited conditions.

Except, of course, they won't be using it, as they've hastily pointed out.

This minimizes the impact a bit: right now, said 23AndMe, it's just's the technology behind a fancy hypothetical predictive genetics tool. Right? Well, no. The U.S. patent describes it as not just the fancy gene-merging visualizer the blog post describes, but as a "gamete donor selector" that allows a recipient to identify "a preferred donor among the plurality of donors".

Interestingly enough, the Genetic And Medicine article's authors make the point that, sometimes, people take out a patent on technology as a preventative measure against breaches of ethics just so that nobody can ever actually develop it. (Think of it like this: After the Boston Marathon bombings, one do-gooder bought the domain name bostonmarathonconspiracy.com just so that nobody else could.) There exists, for example, a 1997 patent for a human/animal hybrid that was taken out so no one would actually create one. With something as hugely controversial as deliberate trait selection, the authors wondered if it was possible that 23AndMe was adopting a similar strategy.

But maybe that's optimistic. There is "no indication" that this is the case here, they added.

More like this
20 Smart Devices Under $35 That’ll Change The Entire Vibe Of Your Home
By Emma Carey
Here's How To Get Your iPhone To Update Automatically Forever
By Emma Carey
30 Clever Ways To Slide Into Your Crush's DMs
By Griffin Wynne, Carolyn Steber and Lexi Inks
Everything To Know About 'The Last Of Us' TV Adaptation
By Sophie McEvoy and Radhika Menon
Get Even More From Bustle — Sign Up For The Newsletter